by Gauthier Dieudonné, Director of CLM

Izemène Pierre is a forty-year-old mother of eight, who lives in Brinèt, a community right off the main road leading to the town of Saut d’Eau. She used to live in Petit Bois, a village in the neighboring commune of Lachapelle. Her husband was the sole bread winner of the house, and when he died, she was left to fend for herself and her children.

Desperate and homeless, she and her children followed a man to the annual week long festival of Saut d’Eau. A couple of days after getting there, the man disappeared. She turned to begging, and the children began doing chores for other people so they could get something to eat. At night they would huddle together on the streets to sleep, something that a lot of people do during the festivities. 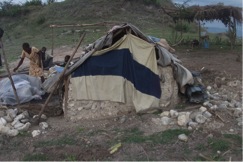 Once the festival was over, they could no longer sleep in the streets. They started roaming through those streets and the roads leading into and out of the town. At the end, they began squatting on a piece of land along side of the main road.

The caretaker responsible for the land didn’t have the heart to throw them off. He allowed them to put up a shack that her oldest sons made out of twigs and mud. In December 2011, she was selected for the CLM program. She chose goats and pigs as assets. In addition, she received the rest of the items in the CLM package.

Once the owner of the land found out that a latrine was being built for Izemène and a more permanent housing being assembled, he offered to sell her a piece of land where she could establish herself and her family. Most landowners would have just thrown her out. He didn’t want to have the more permanent structures on his own land, but he was willing to make things as easy for Izemène as he could. He even gave her some time to figure out how to get the money.

But there was a problem: CLM has no funds to buy land for its members, and Izemène had nothing like the money she would need. On the other hand, if she could not buy the land, she would have to leave it.

The solution came as a surprise to us all. The CLM program often receives visitors, and we always take them to visit our members. We took a group to visit Izemène, and they were so moved by her situation, that they decided to make a contribution so that she could buy the piece of land. 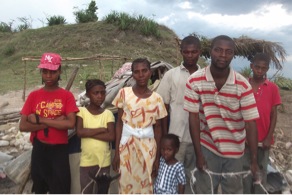 Now Izemène is the proud owner of a piece of land with proper legal documents. This is the first time she has ever owned anything that valuable. Now that the raining season has started, her case manager and her regional supervisor are rushing to make sure that her house is put up to protect her and her family from the rain.