The following piece was written by Hébert Artus, one of my fellow regional directors for Fonkoze’s Chemen Lavi Miyò CLM program. I am grateful for his permission to share it.

In October 2010, piles and piles of people started to die near Haiti’s Artibonite River because of contamination by cholera bacteria. Within a month, the cholera had spread through all of parts of the country. The epidemic showed how vulnerable the population was, especially the poor and those living in isolated corners. On top of the typhoid, malaria, stomach problems, and diarrhea that plague poor and remote communities, cholera arrived as a heavy new burden to weigh down the lives of those living in Haiti’s mountains. The story of Fonbriyòl is an example.

Fonbriyòl is a community northwest of Chanbo, the main town in Boukancare. It’s split by the Boukankare border with Tirivyè, a neighboring county in the neighboring province. Fonbriyòl is on a mountain about 400 meters high. The part in Boukankare, where CLM works, has about 50 families. Eight qualified for the program. The two main sources of income there are animal husbandry and farming, with beans, corn, and millet as the main crops. The area has a lot of polygamy. Men tend to have at least two wives, so there are more women then men there.

In August 2011, the CLM team that visits Fonbriyòl was seeing people dying of cholera because they lived too far from health centers to get to them in time. It takes at least five hours for a team of four men to carry a victim to the nearest clinic on a stretcher. The rainy season was bringing more cholera with the rain, but it also making the road from Fonbriyòl to the nearest health center more difficult because the rivers that cut it in several places had risen and the rain was turning the dirt road into a sea of deep mud. Because the community has relatively few men, people were dying for lack of neighbors to carry them to the hospital. A CLM member’s husband, St. Valet Blanc, died while his wife was at the cholera center with their child because his neighbors had just taken another cholera victim to the hospital and hadn’t had time to return. There was no one available to help him.

Under the circumstances, it didn’t take a psychologist to understand the discouragement that set in on top of the mountain. People in the community thought they were all going to die, and they didn’t know what to do. Distribution of chlorine to treat water was not reaching Fonbriyòl. Neither was the anti-cholera education campaign. The area was simply too remote.

The CLM team decided that its first step towards solving the problem was to visit the spring that serves as the source of drinking water for people in the area. The photo below requires no commentary. 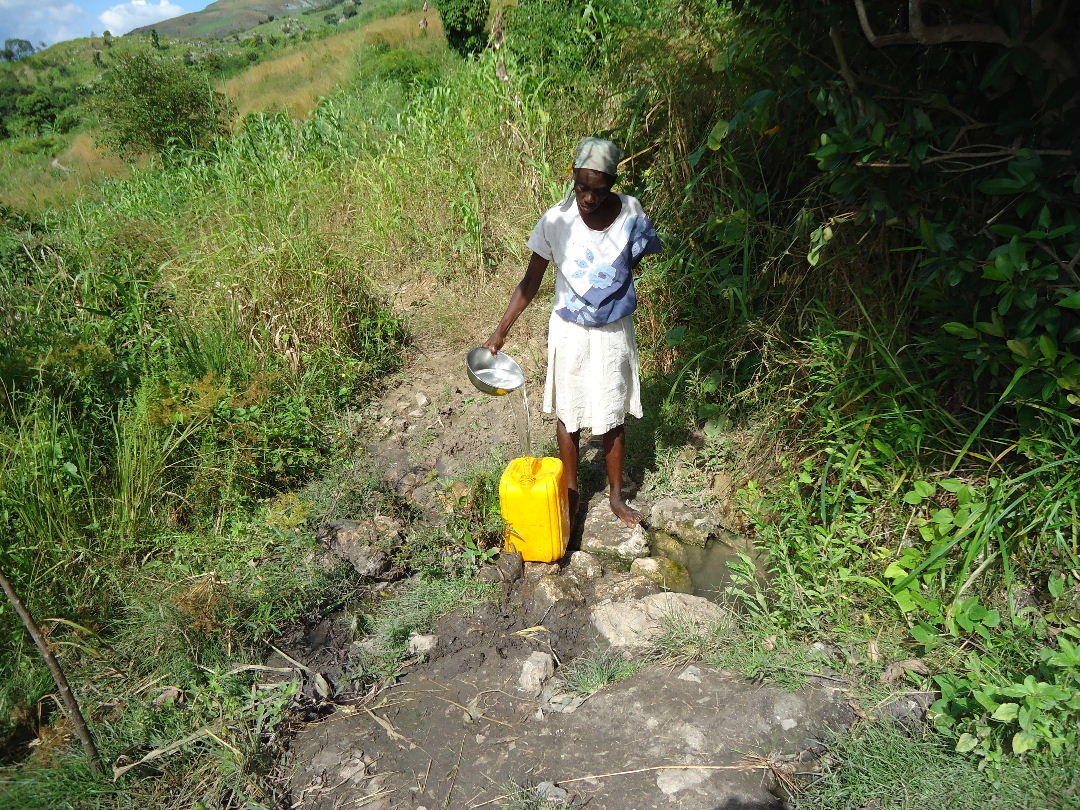 In conversations with residents of Fonbriyòl, the CLM team agreed to lend the community a hand towards addressing their water problem. At the same time, the team used these community meetings to share information about how sickness spreads because of untreated water. These discussions led us to decide to help them cap the spring and build a small cistern to collect the water. We agreed to buy the materials that would be necessary and to pay a skilled mason to direct the work. They agreed to carry the cement on their backs from Chambo to Fonbriyòl, to collect rocks and sand for the construction, and to provide meals for the workers. CLM staff members made contributions to support the initiative, and October 22 was chosen as the day to begin the work. A team of 26 case managers, sector specialists, and regional directors made the climb.

When we arrived, we ran into a cultural problem that we hadn’t anticipated. Community members were afraid to cap the water source. They believe it to be home to a divine spirit, and so were afraid to transform it. Instead, they led us to a larger spring on the Tirivyè side of Fonbriyòl that they were willing to have capped. That’s where the locals agreed to start the work with us. 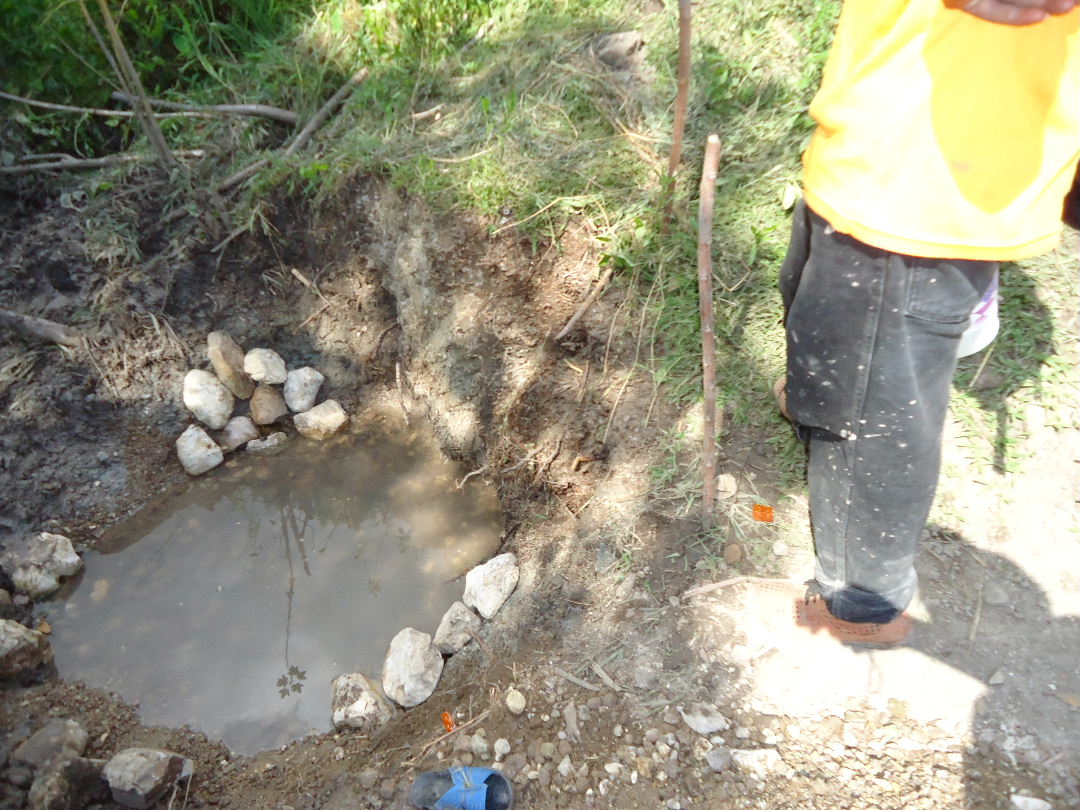 Now the spring has been capped and there’s a small cube-shaped reservoir, about 1.5 meters long in each direction. It’s a first step towards improving the water that the people of Fonbriyòl use every day. It also allows water to collect overnight, which people can come get during the day.

The case managers who work in the community, Christian and Lénort, are beginning to organize a committee that will be responsible for managing and maintaining the water source. That’s what the CLM team can do to help members of the community in Fonbriyòl ensure a supply of reasonably clean water. But who is going to help them get what they need to treat the water they collect for drinking? 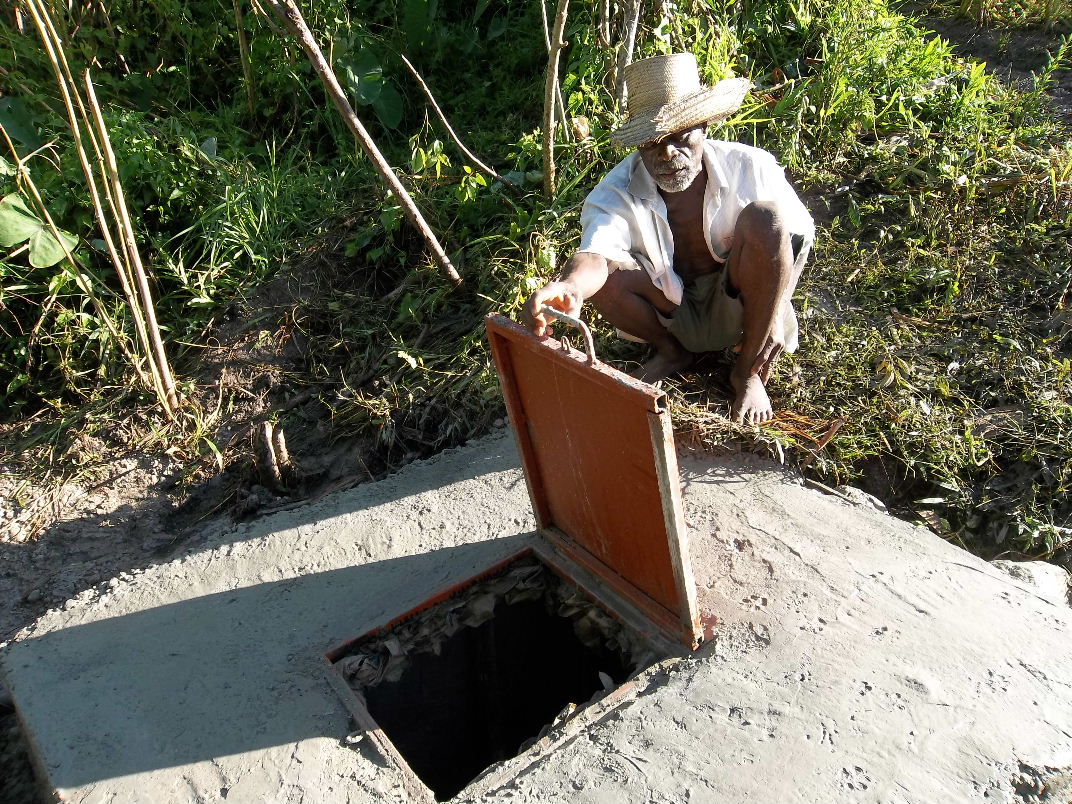 Around the world, clean water is increasingly turning into a commodity. Little bags and bottles of drinking water are both expensive and unavailable in Haiti’s remote rural communities. Those who have no money to buy water are condemned to drink from rivers, because that’s the water that’s free of charge.

Now, cholera has made things even harder. Some families have lost their most important members, the parents who lead them. Harvests have been reduced because peasants are too busy carrying the sick to health centers for them to do their farming. Many farms have been taken over by weeds because agricultural laborers are carrying cholera victims to treatment centers instead of weeding.

Who’s giving a thought to such communities? When will water become a fundamental right so that both rich and poor have access to clean water that doesn’t make them sick? When will the money that’s being spent on war be used instead to save people who are dying because the water they drink everyday is poisonous?

When will Haitians stop dying because they don’t have the money to buy chlorine or other water treatment materials or treated water? When will I find answers to these questions? Who will provide the answers and when?