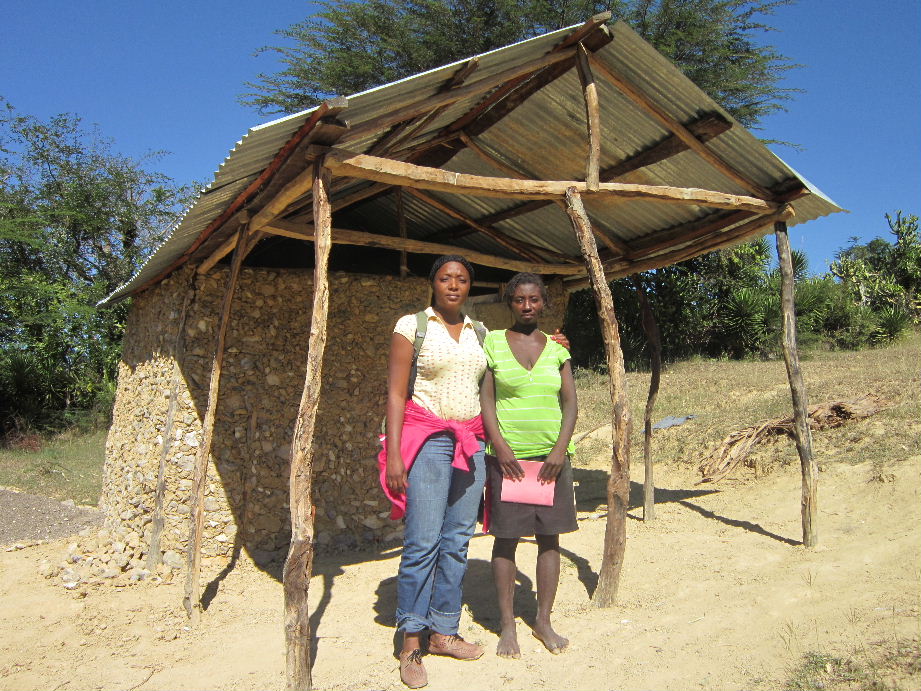 With her CLM Case Manager, Alancia

Jean Manie was born on Mòn Dega, the mountain road that leads up to the ridge that divides Boukankare from Tomonn. She thinks she’s in her early or mid twenties, but she can’t be sure. Her parents died before she can remember, and she spent her earliest years living with an aunt.

But even as a little girl, she saw that her aunt’s house was not the place for her. “There was nothing for me there,” she explains now. So she moved to Chimowo, a very rural area just west of the center of Boukankare, along the river that flows through the middle of the county, to live with a married cousin, her aunt’s daughter. The cousin, and her husband Mousa, gave her a place to stay and food to eat, and in turn they expected her to work. As a girl, she babysat for their three younger children. As she grew, they gave her more and harder chores: “I did farm work, cooked the meals, and did the laundry. I was the first one up in the morning. On days when teams went out to work the fields, I’d be up by three to make sure that everything was ready.”

Jean Manie lived with Mousa and Madanm Mousa for years. She was living with them when she reached puberty, and was in their home when she had her boy, Patrick. Before Patrick had turned two, Mousa decided that he couldn’t support both mother and son. So Patrick was shipped off to live with the aging aunt. Jean Manie missed her son, and would hike across to see him whenever she could.

That was how we found Jean Manie when the CLM selection team went through central Boukankare: Living as an unpaid servant in her cousin’s home, with nothing she could call her own, separated from her only child. It’s fortunate that our selection team failed to catch the fact that her son wasn’t living with her. Women without dependents are ineligible for our program. Her original case manager, Sandra, solved that problem and immediately sweetened Jean Manie’s life by convincing Mousa and his wife to bring Patrick back into their home.

CLM was able to offer Jean Manie an opportunity, but we hardly seemed to be doing her much good. We gave her two fertile goats and a fertile young pig, but Mousa continued to give her so much work to do that she wasn’t able to care for them. The pig eventually died, along with its litter of five, and the goats became sick. She got her regular weekly stipend, but after making a small deposit into the account that CLM opened for her, she would give the rest to Madanm Mousa, to “hold it for her.” Haitians frequently save money by leaving it in wealthier neighbors’ hands. Then Jean Manie would never see the money again. When the pig died, Madanm Mousa helped her sell the meat, but Jean Manie hasn’t seen the money yet. The worst thing was that Mousa and his wife showed no concern for Patrick. “They didn’t want to know that the boy needed to eat and drink.”

Things came to a head because Jean Manie’s second case manager, Alancia, became worried that her goats were close to dying of neglect. She convinced Jean Manie that, at least for the time being, she should turn them over to a member of the Village Assistance Committee in Chimowo. These VACs are groups of community leaders whom CLM organizes to provide the program and its members with various kinds of support. Jean Claude, the Chimowo committee’s secretary, said he would look after the goats until Alancia and Jean Manie could find a more permanent solution.

Mousa was furious. He hadn’t been consulted. What’s more, he had thought the goats should be in the hands of his own boys. They could look after them, and then be rewarded for their work. Typically, someone who keeps a female goat for its owner will receive one of the kids as their price. Mousa wasn’t at home at the time, but he called Jean Manie on the phone with a threat. “//M ap gonfle kò w ak baton an//,” he’s reported to have said. That’s like saying, “I’ll beat you black and blue.”

Fortunately, it all happened on the day of a committee meeting, so Jean Manie was able to tell the committee and Alancia about the threat right away. Alancia sent her own threat back to Mousa. “//Si w mete men sou Jean Manie, w ap konnen sa m peze//.” That’s a little hard to translate. Literally, it means, “If you lay a hand on Jean Manie, you’ll know what I weigh.” It’s like saying, “Touch Jean Manie, and you’ll see what I can do.”

So Mousa didn’t dare hit Jean Manie, but he and his wife threw her and Patrick out of their home. She didn’t initially think she had anyplace to go, but one of her fellow CLM members took her in right away. Eventually two different members, Tona and Idana, gave Jean Manie and Patrick a place to sleep for a couple of weeks each, and they did so despite the fact that neither of them had much a home to speak of themselves. But they understood her need, and didn’t hesitate to do what they could.

Alancia was already in the process of helping the members in the area build their new homes, but Jean Manie had no land. Alancia went to the pastor of the church Jean Manie attends, and convinced him to give her a small plot to build her home. But when Mousa, who attends the same church, found out, he threatened to leave the church, and the pastor went back on his word.

So Alancia brought the question to the Village Assistance Committee, and after much discussion, and Jean Claude agreed to sign over a piece of his land. The construction materials were already available, and Jean Claude himself is an experienced builder, so it didn’t take long to make one small room habitable, and Jean Manie and Patrick moved right in.

They are thrilled to have a place of their own. Jean Manie expresses her feelings simply: “When you’re in your own home, if you’re not feeling well in the morning, you just stay in bed. When you live in someone else’s home, you have to get up every morning, no matter how sick you are.” Patrick puts things more starkly, “Even if they just sent me on an errand to Mousa’s house, I’d rather die than go.”

Jean Manie’s problems aren’t over. Her goats are getting healthy again, but the fact that they haven’t reproduced yet means that she’s behind. Her pig is dead. So her asset base is very weak.

At the same time, now that she’s in her own place she is saying for the first time that she thinks she could manage a little business, and she’s even suggested a plan to Alancia that looks pretty good to us. She has almost 2000 gourds, or about $50, worth of savings. If she and her committee can make Madanm Mousa pay her the money she’s owed for the pig, she’ll have about another 1000 gourds. She wants to sell household basics — kerosene, rice, oil, salt — by the side of a main road that passes within a couple of hundred yards of her shack. So she has more than enough money to get a very small commerce started. 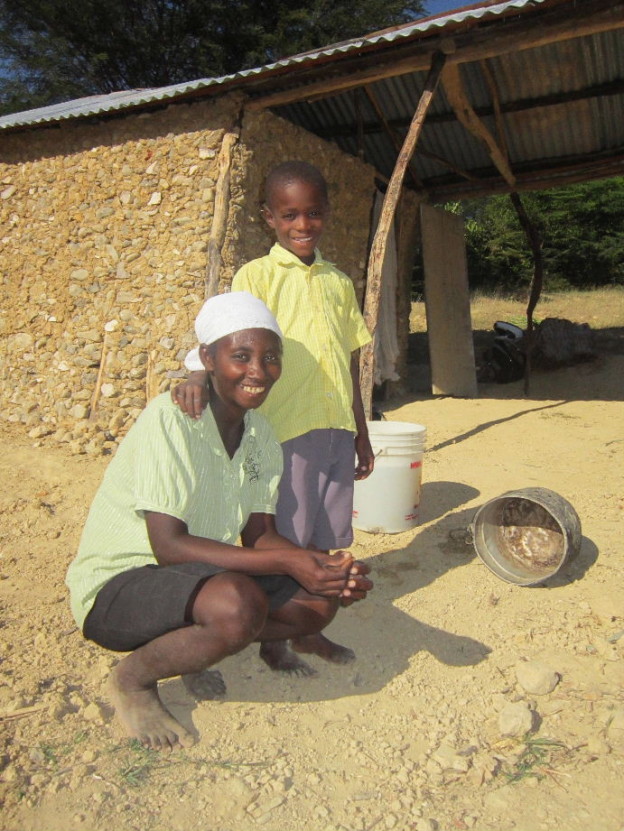 Jean Manie and Patrick, wearing his school uniform, in front of their home.