Even after 18 months, it is still hard to talk with Juslène. She’s friendly, even cheerful, and she’s happy to chat. She seems excited to see me whenever I come by.

But she just doesn’t have much to say. I ask her about graduation, and she says it was “bèl,” which can mean pretty or good, but when I ask her what she liked about it she says she doesn’t know. That’s just one example. A cheerful “m pa konnen,” or “I don’t know” is her answer to most questions, at least her initial answer. She can’t say what about the graduation she enjoyed except to say, “because I graduated,” nor can she say what about it is important to her. As her boy fumbles around in my bag, I ask her how old he is now, but she doesn’t know that either. She can remember only which local children were born before him and after him, and with that information a neighbor concludes that he’s probably four.

She plans on going to the final meeting of her Village Savings and Loan Association later on the day of my visit. It is an important meeting because she’ll receive the savings she accumulated through the year along with the interest it earned when association members repaid their loans, but she doesn’t know how much she’ll receive. She won’t even hazard a guess.

She does, however, know what she plans to do with the money. It’s planting season in Kolonbyè. She’ll buy black beans, which is an important cash crop in the area. The farming she does with her partner is crucial to the family’s well-being since her livestock never really flourished within the program and she never started a small commerce. Though she lists the goats and the pig she was given as the program’s most important elements, she didn’t succeed with either. We gave her two goats, and she graduated with two goats. We gave her a pig, and she graduated with a pig. All she was able to accumulate was some poultry: a turkey and two ducks. Most of the couple’s wealth is in their farming.

And their lives have changed. When she joined the program, she was living in the corner of a room in her sister-in-law’s house. Now she has a little house all her own. A plank nailed across two short posts that were driven into the earth next to her home’s front door serves as a bench, and she loves to sit there and chat with passers-by. It leaves me wondering what she says to them.

More important, however, is the transformation of her boy. When she first joined the program, he was badly malnourished. He was thin and mostly lifeless in her arms. The CLM nurse referred him to the local government health center for evaluation, and provided a transportation stipend to ensure that Juslène could get him there for regular appointments. Her was treated with fortified peanut butter, the standard treatment in Haiti, and now seems like a different boy. He’s curious, getting into everything. He maintains a constant banter. His development seems a little bit behind. Very little of what he says is clear to anyone but his mother, who talks with him constantly as her case manager taught her to do. 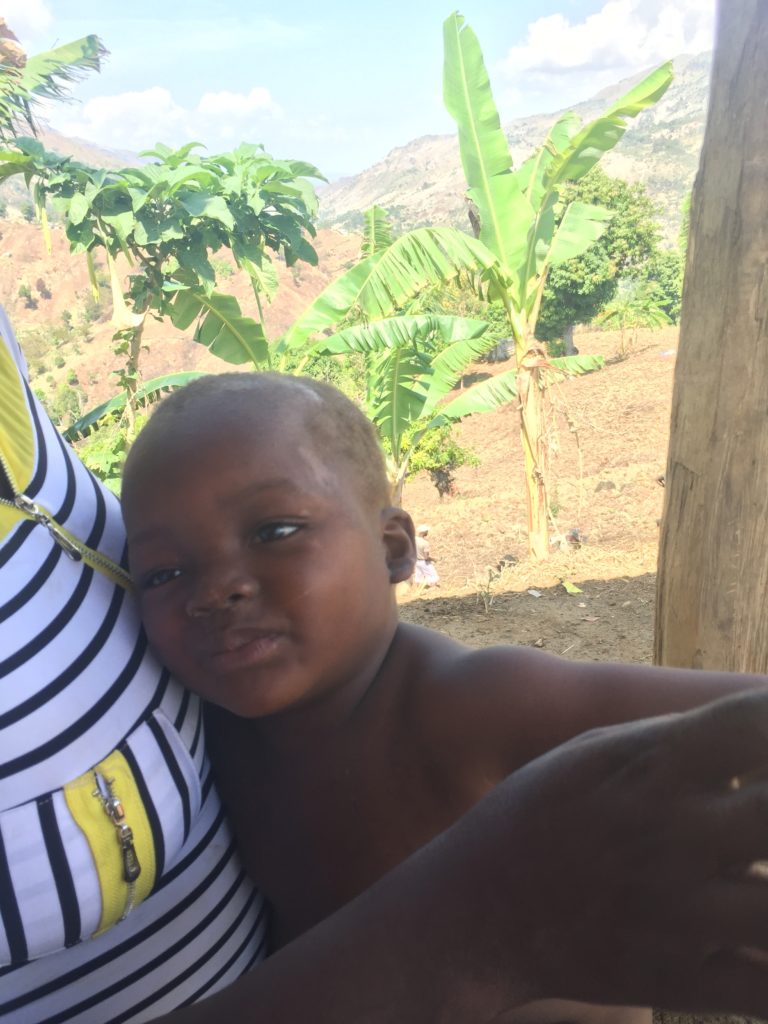