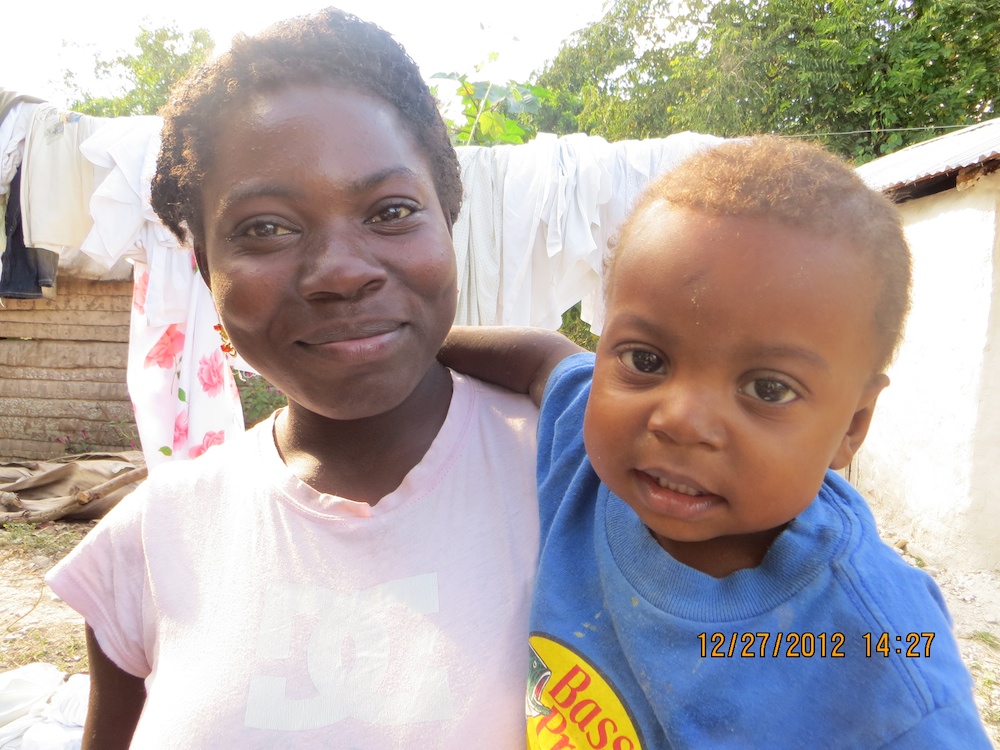 Wideline is a single mother. She lives with her little boy, Alinsky, right next to the Partners in Health clinic that is our base in Bay Tourib. They share the small house that her father built for her with the resources that CLM made available.

Like many of our members, she joined the program without appearing on our initial selection lists. We create those lists at community meetings that we hold when we first start working in an area. In Wideline’s case, members of her community didn’t mention her because they didn’t think of her as an adult. She is in her late teens, and was living with Alinsky in her parents’ home. “We had food to eat, but I had nothing of my own. No way to get started.”

Her story is simple. She had made it as far as the sixth grade, but she failed the national primary school exam. Before she could decide whether or how to continue in school, a man from the neighborhood raped her. Alinsky is the product of that rape. She wanted to have the man arrested, but her parents decided against going to the police. “They’re church people. They don’t believe in the government.” The parents just took their grandchild into their home, where they were already raising three other grandchildren. The three youngest of their own kids were also in the house, and her mother was pregnant with what she hopes will be her last child.

Alinsky’s father lives nearby, but he doesn’t come to see his boy. Wideline is determined to have nothing to do with him. “He can’t come here. He has no child in my house.”

When she joined the program, she chose goats and a pig as her two enterprises. The larger of her two goats got into a neighbor’s field, and he killed it. It was pregnant at the time. “That’s why he and I don’t speak to each other.” The smaller one took some time to grow, but has finally given her its first kid. She decided not to take the pig right away because she was worried about the epidemic of Teschen disease that was killing many of the pigs in the area. So she deposited the cost of the pig in her bank account, and waited to decide what she should invest it in.

Her real break came when Fondation KANPE, which funds CLM in Baille Tourrible, decided to help all the schools in the region pay teachers for a year. Baille Tourrible doesn’t have a lot of educated people. Those who make good progress in school move to Hinche, Thomonde, or Port au Prince. That’s where they see their opportunities. So even though Wideline hadn’t graduated from elementary school, she was relatively qualified to teach a class, at least in one of the lower grades. So her case manager helped her apply to teach at a small private school a short walk from her home. She’s now in her second year as a first-grade teacher.

She took the money that she had received to buy a pig, put it together with savings from her salary, and bought a cow. She’s saving money from her second year’s salary to buy another cow. “My father and my little brothers can take care of them for me.”

So Wideline is starting to accumulate some wealth, and she has a regular income that enables her to take good care of Alinsky. But she’s not satisfied. She wants to go back to school. “Next year I’ll stop teaching so I can go through sixth grade again. I want to pass the exam and then move to Hinche to go to high school. I can live with my older brother there. My mother can take care of Alinksy for me.”

She’s not sure where she wants her education eventually to take her. That’s probably ok. The more successful she is, the longer she’ll have to decide. But with her growing wealth and her secure little house, she is restarting her life with good reason to be hopeful.