The isolation that CLM members have lived with prior to joining our program means that they often come to us with serious problems that have never been addressed, health issues among them. Healthcare in Haiti’s Central Plateau is inexpensive for everyone, thanks to our close collaborator, Partners in Health, but access to healthcare depends on more than just its availability.

It’s only literally available to rural Haitians who would have to walk three-four hours or more to get to a clinic. Even under those circumstances, one finds expectant mothers, for example, who hike to their monthly prenatal check-ups, but not all are convinced enough of he importance of these check-ups to make that sacrifice. Healthcare is also practically unavailable to anyone who doesn’t know how to access it or who doesn’t know that they have that right. And it’s not accessible to someone for whom going to see a doctor doesn’t present itself as an alternative to hoping that things will somehow turn out all right. That’s why, for particular diseases like AIDS and tuberculosis, which Partners in Health especially emphasizes, the institution has pioneered the use of professional accompaniers, who make regular home visits to people in treatment, ensuring that they are on their meds and doing well.

Our CLM team thus comes across instances of striking, untreated illness that only our members’ lack of connectedness to their neighbors and their resignation in the face of their poverty can explain. We work hard to get them to pursue diagnosis and treatment in these cases. Our special relationship with Partners in Health means that all our members receive healthcare that is free, rather than merely cheap. But we find we have to invest a lot of time and energy in getting members to use the services nonetheless.

That’s why I spent a day recently at the hospital in Kanj, with a social worker from Partners in Health and three CLM members’ kids: Yvona, Elisson, and Raynold.

Yvona and Elisson are blind. Neither one has been so all their lives; each could see until a few years ago. Yvona is probably about twelve or thirteen. Elisson is almost twenty. Their families have watched each lose their vision without knowing what to do about it. Elisson and Yvona spend their days sitting in their parents’ front yards, with neither the vision they would need for normal participation in their families’ lives nor the adaptation to blindness that someone sightless from birth would naturally have.

I first met Elisson a few weeks ago, when hiking through his village, Elmani, with his family’s case manager, Benson. Benson has only been with us for a few months, so the main purpose of going out with him was to coach. One of the important, if peripheral, parts of his job is to get to know the whole family well, ensuring that he can speak to any of them about issues that are important. When I saw a boy sitting alone in the middle of the yard, detached from Benson’s presence, not obviously even aware of the visit, I went up to him to chat. I wanted Benson to see my effort to engage the boy in what we do. That’s when I discovered that Elisson is blind. His vision has steadily deteriorated over the last three years. When we met, he told me that he can see dark shapes pass across his field of vision, but that he can’t identify them.

We made an appointment for him at Kanj on a day we had confirmed that the ophthalmologist would be available. He and his mother got there early, and were in line before I was able to arrive with one of my other charges, and by the time I saw them, he and his mother were being led out of the hospital by Nahomie, the Partners in Health social worker who is part of our Bay Tourib team. The news was bad, and their faces showed it. Elisson has glaucoma. There is nothing anyone at Kanj can do to restore his sight.

I wasn’t aware of Yvona’s blindness until the case managers told me that they had decided to send her to Kanj the same day I would be there. She lives with her family close to the town of Bay Tourib, not far from our residence there, but I haven’t yet been to her home. She’s a thin little girl. Her news is much more encouraging. She has cataracts, and Kanj can do the necessary surgery. She’s been scheduled for February, and stands a very good chance of recovering her sight.

Raynold’s case is more complicated. I met him at his mother’s house in Anba So, a remote neighborhood of Boukantis, an area outside of Bay Tourib. I’ve written about the area before. (See: MoreCholera.) He was at home the day I went to his neighborhood with one of our case managers to spray the area with bleach. It had been hit suddenly with multiple cases of cholera. Raynold’s parents were away when I arrived. They left him to look after their nine younger kids, so he’s the one who let us into his parents’ house so we could spray, and he’s also the one who showed us to the other houses we needed to see. A couple of weeks later, he met me when I returned to the area to see how folks were getting on, and he spent the day walking with me from house to house.

That walking was not easy for him, not as easy as it should be for a boy his age. But Raynold suffers from scoliosis (http://en.wikipedia.org/wiki/Scoliosis). His spine is badly curved. He lives with constant pain around his right hip. He can walk only slowly. The curvature also puts pressure on his ribcage, which affects the way he breathes. It’s enough for regular breathing when he’s resting, but won’t allow any vigorous effort at all.

Getting him to Kanj involved some planning. His mother couldn’t take him because she would be in a weeklong workshop with other CLM members when we wanted him to go. So we picked him up on a Monday morning, and brought him to spend the night with us at our residence in Mirebalais. Tuesday, I would put him on the back of my motorcycle, and take him to the hospital myself.

I had a Monday evening meeting it Port au Prince, so I had to leave Raynold at the residence with our team. I wasn’t sure how that would work. Here was a seemingly shy rural boy, from a very isolated little settlement, suddenly dropped into the middle of a residence full of strangers and strange experiences.

When I got back at almost nine, I discovered that there had been nothing to worry about. Raynold had been well-fed by our residence hall cook, Nanoune, and was listening to music with one of the case managers, Ismith. Ismith had insisted that Raynold spend the night in the empty bed in his room, had shown him a Haitian movie on his laptop, and was chatting away with him like they had been brothers since birth. Raynold was a happy as could be.

The next day, we went to the hospital, where the news was not what we had hoped. The Kanj orthopedist said that Partners in Health does not have the expertise on staff to treat Raynold. They sometimes have visitors who could do so, but it’s not a regular, predictable thing. All he could do is suggest that we bring Raynold to see him regularly, so that he can keep track of the curve as it develops. As Raynold grows, he said, the spine may well continue to both bend and twist. Things could thus get worse. For now, all we can do is watch.

Raynold got back on the motorcycle, and I drove up towards Boukantis to drop him off. We spent quite a bit of time talking when we got there. He hadn’t really understood much of what the doctor had said to him, and I wanted to make sure he had a clear message he could give his mother when he got home. So we went over things several times. I also told him that the social worker would come to see his mother this week, and that I’d be in Bay Tourib next week if his mother still wanted to talk.

But before he walked away, he told me that, if it was all right with me, he’d just tell his mother that he was leaving home to come live with us in Mirebalais. He said she wouldn’t mind.

It was easy enough to understand. He’s the oldest of ten kids in an extremely poor home. His mother can barely have the means to feed them all. She hasn’t been in the program very long. And as an older child he’s no doubt asked to make sacrifices for younger kids who don’t yet understand. Nanoune fed him wonderfully, and Ismith made him feel liked a well-loved young boy. 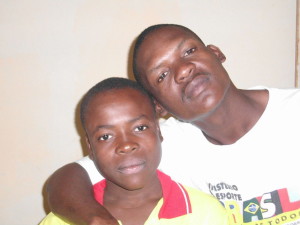 I explained that I thought that his mother really needs him. He can see that, with CLM, she’s working really hard to change their lives. But none of it is easy, and many of her children are still small. I want her to succeed, I said, and cannot imagine how she’ll do it without him. He said that he understood and agreed, but I’d be lying if I said that I felt sure that he did, or that I was certain about my own words. The reality is that we cannot turn our CLM residence into an orphanage. We need to keep focusing on helping the kids we encounter have better lives in their own homes.

So we will have to continue to stay close to Raynold. At the very least, we need to help ensure that he sees the Kanj orthopedist regularly. We’ll also look for any others who might be able to help him out. He deserves a chance at good health. But not only that: As a strong and healthy young man, he could be a major part of the path out of poverty that his family takes.