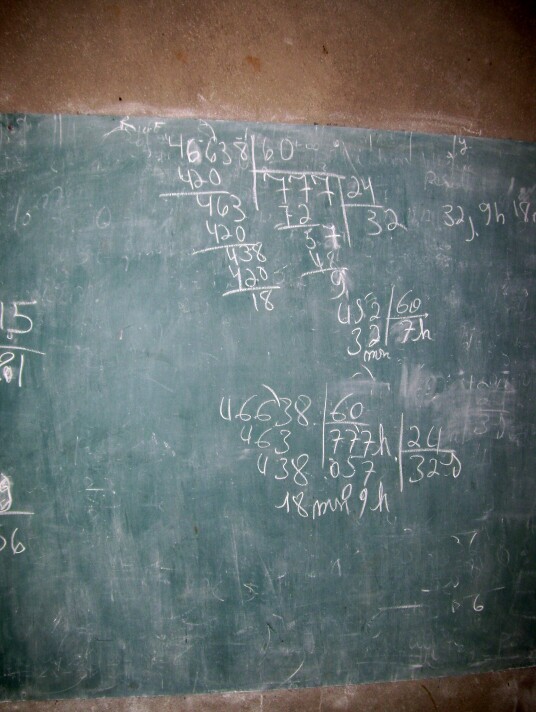 I hadn’t had a full Sunday in Ka Glo in several weeks, so I was looking forward to the day this past Sunday. I had imagined a day of relaxation: a little writing, but nothing too demanding, a little chatting with neighbors, but nothing too serious. I might take a stroll, but wouldn’t go too far. I would start looking at the copy of //Huck Finn// that I brought back from my last trip to the States.

I could not have been more pleasantly wrong.

At about 7:00 AM, Boul was at my door. He was, more particularly at my front patio, where I have a black board. He wanted to do some math. Between Boul and the several others who came during the day, it was well into the afternoon before I had an extended break.

I’ve been doing math with local school children almost as long as I’ve been coming to Haiti. It’s something I enjoy, and seems useful enough.

But Boul only just started coming. He’s in his early twenties and decided to return to school this year after missing several years. He registered for the sixth grade, even though he’s never been in the fifth. He’s hoping to manage the national primary school graduation exam next summer. He can’t give up working just to go to school, but he found a school well down in Pétion-Ville that he can attend from 4:00 PM until 7:00 PM. That means he has to walk about two hours home every night in the dark, but it’s worth it to him. He says he wants to get through ninth grade, and then just earn a living.

Boul lives with his mother, stepfather, and seven younger siblings in Upper Glo. One of those siblings is Ti Kèl, who’s been working with me a lot for more than a year. He does small chores around my house, runs errands for me, and generally makes himself extremely useful. So Boul’s seen me work with others, and a few weeks ago he came by for some help of his own. We had a pretty good time, so he decided to come back for more. 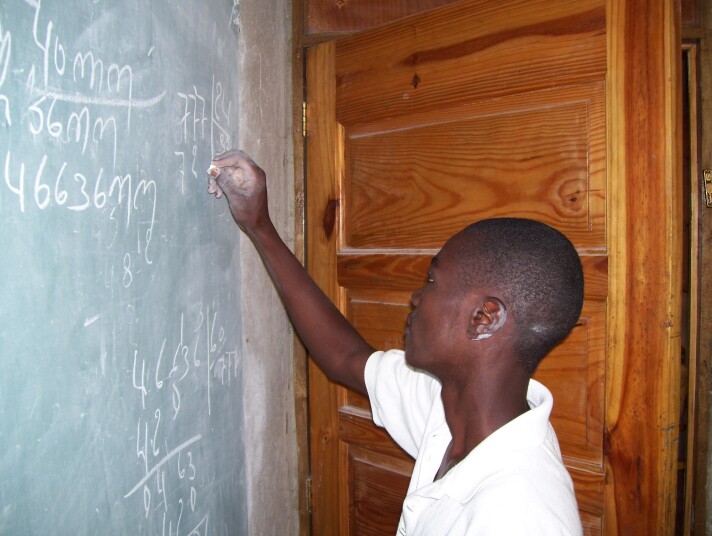 He was working on two different kinds of problems. The first he learned quickly, with very little problem. He was given a fraction and either the numerator or the denominator of a second fraction, and he had to complete the second fraction so that it was equal to the first. So, for example, he might be given two-thirds and a four as a numerator. He had to figure out that the complete second fraction was four-sixths.

He found the second type of problem much more difficult, ad we spent hours working through a rather long set of them. He would be given a number of minutes, and he would have to convert them into hours and, sometimes, days. 4976 minutes, for example is three days, ten hours, and 56 minutes. 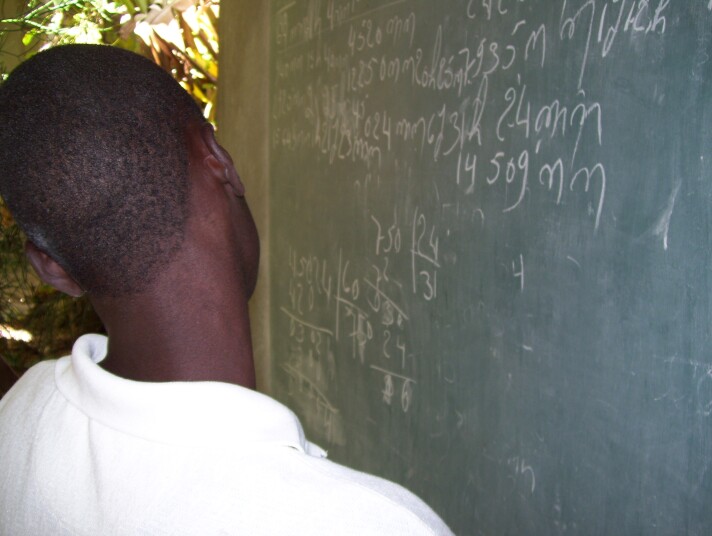 The biggest difficulty was that he couldn’t reliably divide. He knew all the moves, but was unaccustomed enough to them that he would invariably make one little misstep. But he stuck with it for several hours, with a range of onlookers.

Here are his little brothers, Ti Kèl and Roland: 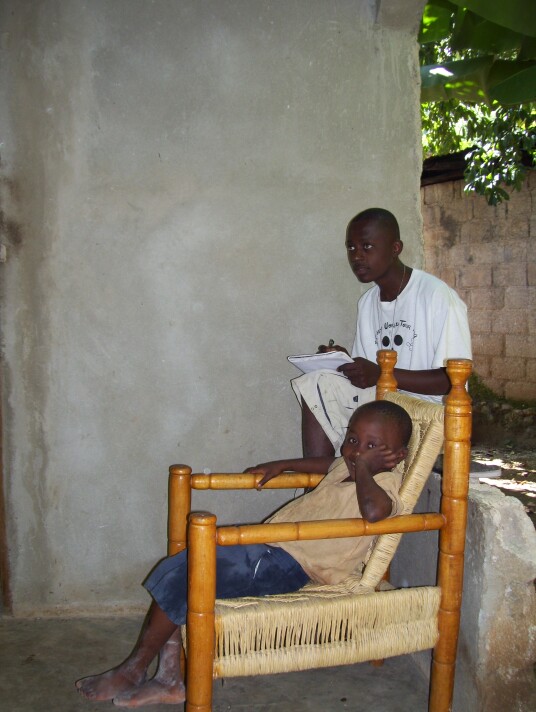 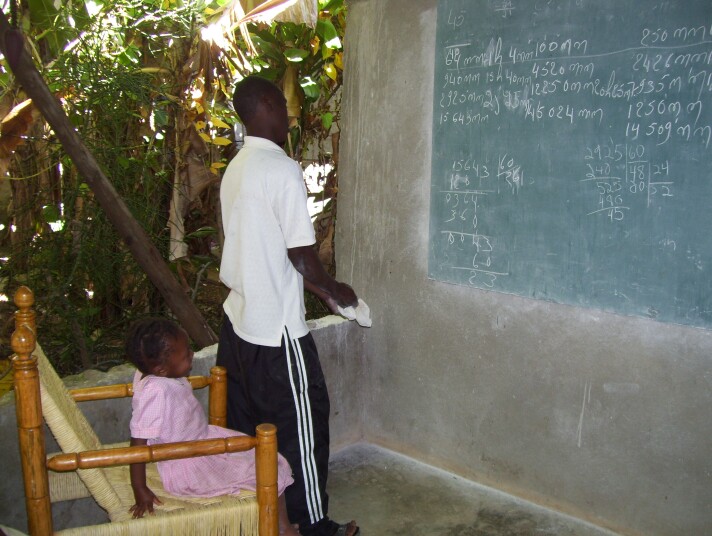 Here’s Ti Kèl again, with their neighbors Patoutou and Kaki: 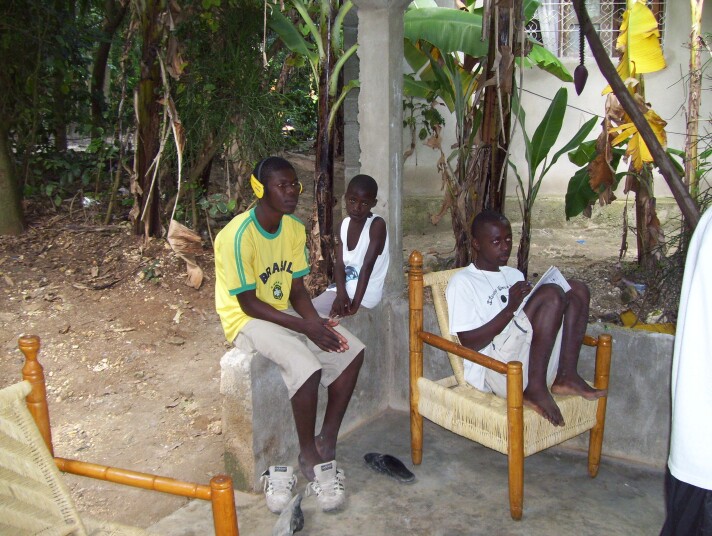 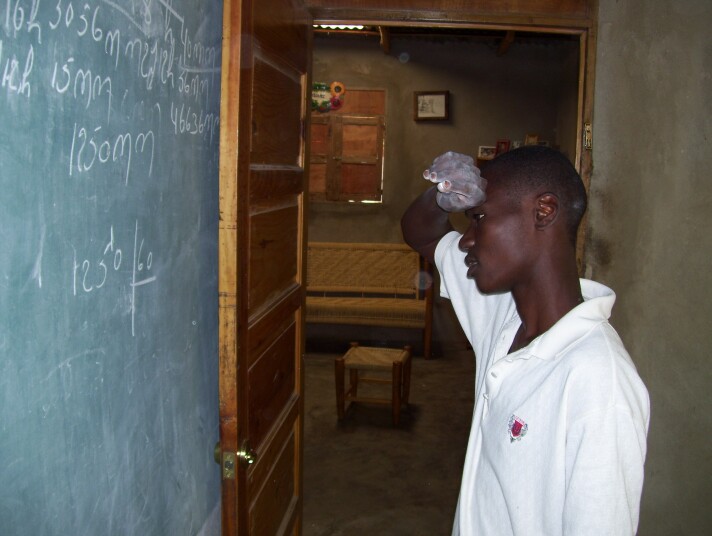 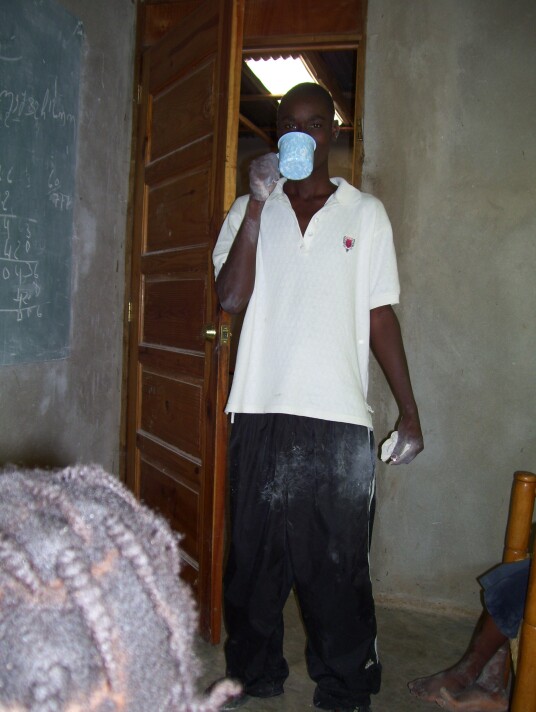 The little bit of tutoring that I do could hardly be my central activity here in Haiti. But I think it’s important to me. It helps me keep the very really difficulties that learners face right in front of me. And it’s both useful and encouraging for me to stay close to a young person like Boul, whose interest in learning is enough to bring him to the blackboard on a beautiful Sunday morning in Ka Glo.