Gauthier, the extraordinary person who leads the CLM program, told me I had to write this story. It has to do with a $50 investment I made last week.

When he recruited me into the program, he warned me that I would find myself reaching into my own pocket once in awhile. We deal with people who are, especially when we first meet them, miserably poor. “Miserably” here not just a word. It reflects the fact that they are hungry, sick, unprotected from most of the harms that might come their way, and without the social or financial resources to change their own lives.

The warning was especially true during the verification process, which preceded our enrolling new members into CLM. The process involves visiting homes in which the program is not yet at work. You see the poverty, but you’re not yet doing anything about it. You find yourself arriving in the mid to late afternoon, with children crying because they haven’t eaten all day and have no prospects of getting a meal before going to bed. The mother tells you her story, and you find yourself giving her 50-100 gourds, or a little more than $1-$2, if you have them, so she can buy what she needs to cook a meal for herself and her kids. It doesn’t feel like a very meaningful gesture. The family needs much more than 100 gourds. But it makes you feel a little better because it means they’ll eat that day.

But we’re past verification now. Our comprehensive intervention into members’ lives has begun. So the desire to hand out small change has faded. But things still come up.

I hiked up to Manwa a few weeks ago, needing to talk to some prospective CLM members. Manwa is on the top of a mountain, and the first structure one sees as one crosses over the ridge is a small church. It houses a small community school, which serves local kids, taking them through the third grade.

When I reached the school, I found Jackson standing in front of it, taking in the scene as the schoolchildren played. It must have been recess. He’s the youngest son of a new CLM member, a 16-year-old boy whom I met when I visited his mother’s house during the verification process. I didn’t know the homes I needed to visit in Manwa, and I thought Jackson would, so I asked him whether he’d be my guide. He said he would, so we spent most of the day hiking around together. At the end of the day, I paid him a little bit for his time, and we chatted as we walked back down the hill together. I asked him what he was doing up at the school. It’s a steep, half-hour’s hike from his mother’s house. He said that when he has nothing to do he likes to watch the children in school. To watch them. He’s never been to the school himself. His mother hasn’t been able to afford it.

So when I went back to Manwa to visit our members with their case manager, Martinière, I was looking for Jackson. He was, as usual, at his mother’s house. Martinière and I spoke to her first. She seems really devoted to the boy, just as he seems devoted to her. She wants him in school, and hopes that the goats and pigs she will raise through CLM will enable her to send him next fall. Her other children are older. It’s probably too late for them to start, but in Jackson she has one hope. We told her that she’d need to get ready for next year, but that we wanted to get Jackson started now, before it’s too late, and that we’d pay for it. She agreed.

When we were finished talking with her, we asked Jackson whether he could take us to the school principal’s home. We didn’t tell him why. When we got there, we asked the principal what we would need to do to get Jackson in school right away. Jackson’s draw dropped. As we negotiated and then paid the school fee for the year, Jackson could only watch. We then took him aside and asked a few questions. We needed to know whether he had shoes, socks, underwear, and pants and t-shirts that could be cleaned to look ok. Though he’d eventually need a uniform, that would take some time. The principal was willing to let him come right away, “in civilian clothes” as they say here, but he’d need to look more or less decent anyway.

Jackson had nothing but a ragged pair of shorts and a t-shirt, also ragged. No amount of cleaning would make them presentable. He’d need a whole new wardrobe. So Martinière agreed to meet him at a nearby market, on an off day, so that they could buy everything he’d need.

When we said our goodbyes and headed down the hill, Jackson’s last words were “lendi m pral lekòl.” Or, “I’m going to school Monday.” The matter-of-fact-ness of these words, their expression of a simple, unexpected realization was as striking as the excitement behind them.

If there could have been any doubt about his enthusiasm, it was eliminated the day he met Martinière in the market in Domond. I said that it’s near Manwa, but “near” is a relative word. It’s easily a four-hour hike each way. And Jackson’s lame. He stubbed his toe painfully walking around in his front yard, ripping off a toenail, and limps badly. But he and his mother made that walk and spent an hour in the market with Martinière. Jackson didn’t know how to try on clothes. Martinière told me that it was as if he’d never done it before. At 16, he was trying sneakers on the wrong feet, choosing pants much too large or much too small, picking the first of everything he would see. Maybe he was just afraid that if he took too much time over things, it would all turn out to be unreal. Martinière had to give lots of firm guidance. But they got their shopping done. Jackson even came with a handwritten list of books he’d need. The principal wrote it out for him. They bought those, too. All told, we spent about $50.

So Jackson’s excited. We hope it lasts. He has a tough road ahead of him. As a big and growing teenager, he’ll be sitting in class with kids half his age, kids who are now well ahead of him. He’s got a slight speech impediment due to a significant overbite. He’s surely in for some teasing. Limping to the Domond market and back showed a lot of determination of a certain kind, but the determination to face the small, daily difficulties that will follow is another matter.

In a sense, his situation is emblematic of what our members face as they join our program. They suddenly find that they have access to resources and support that they could hardly have imagined. They have assets to manage, food to eat, and a well-trained advisor to guide them. But their daily struggle to change their lives has just begun. 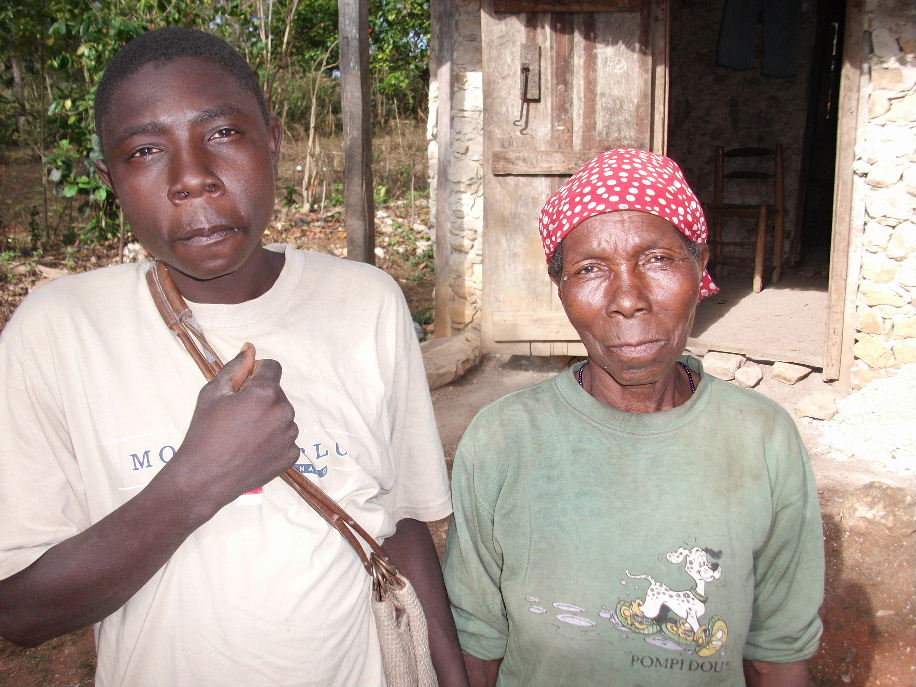 Jackson and his mother, Manie