Jeannette lives in Mable, a remote corner in the mountains that separate Haiti’s Central Plateau from the plain to the north of Pòtoprens. She lives there with her husband, Charles, and their three young boys.

Though she and Charles are both from Mable, they had just returned to the area when the CLM team was selecting new families for the program. They had spent a couple of years away in Mibalè. Charles had been involved in a conflict with one of his uncles about land, so he and Jeannette moved with the kids. The couple spent two years struggling to rent a room there and to send the children to school. Forced to move away from their land, which had been their main source of income, they couldn’t make ends meet. They sold off their livestock, and eventually ran out of money.

They were forced to move back to Mable, build a small shack, and return to farming. They didn’t have their own land. They had never been able to buy any. But they could work their family’s land. They needed to be fast and determined, however, because others who had similar claims to the land could move onto it and work it if Jeannette and Charles left it idle.

Jeannette joined the CLM program in May 2017. “We lacked the means to help ourselves,” she explains. At first, she wasn’t sure what the program was all about. “I didn’t understand all the questions they were asking or why they asked them. It was when they gave me the animals that I understood it was for real.”

The program gave the couple two goats and a pig, and the couple took good care of them. The two goats became eight, and their sow had six piglets, five of which survived.

But as they saw themselves flourishing, the couple also worried. They felt that their neighbors were jealous of their goats, and the goats were getting to be too many to keep a close eye on. So, they sold six of them to buy small heifer. They even had enough left over to buy a small hog for fattening. They hope to sell the hog in February, when their children’s school bills will be due.

Buying a hog seemed important because they had already sold their sow and her piglets. They needed the money from that sale to complete their house.

Home repair and construction has always been a principal part of the CLM program. Originally, it was added to the program the team inherited from Bangladesh for two reasons. First, Fonkoze felt that program members needed a good roof over their heads to stay healthy. Most lived in improvised shacks that cannot protect them from the elements. Second, Fonkoze wanted all members to have a secure place to store their things. This was especially true for the women who established a commerce and had merchandise to look after.

But home repair — in most cases, it is home construction, because the family has nothing worth repairing — has gradually become more central to the program. The team has made the housing-related graduation criterion increasingly demanding. In 2010, the house just needed to be walled in and covered with a good tin roof. Gradually, the team moved towards specifying completion of all the finishing touches: such as doors, windows, and the drop ceilings that close off the part of the roof that extends beyond the house to form a front porch.

But more importantly, home construction has become a more substantial portion of a family’s accomplishments. Fonkoze always insisted that families take on much of the responsibility for their house. The program provides some combination of roofing material, cement, and nails. It also pays a builder. But the family needs to come up with all the structural lumber that’s necessary and the materials it will use to build up the walls.

This can add up to a lot of expense. Jeannette and Charles spent over 5000 gourds on structural lumber and more than 10,000 on the palm trees they needed to turn into planks for their walls. They needed almost 3000 gourds for nails. They also spent 3750 on additional roofing material, because they wanted to build a larger home than CLM would support. And because their house was larger than a standard CLM house, they also needed additional money to pay builders. In all, the couple spent about $400, which is a lot of money for a family that recently had no means at all to speak of and is much more than the $250 that the CLM program pitches in.

But a home represents more than just a central, life-changing addition to a family’s wealth. A home represents the determination, the grit, the strength that it takes to plan and execute its construction. The finished home shows what a family is capable of. CLM members are intensely proud of their new homes. They often describe them in some detail during the testimonies they offer at graduation. A couple like Jeanette and Charles, who can manage the process of building a new home once, will leave the program confident in their ability to move forward. And Fonkoze and its CLM team can be confident in them. 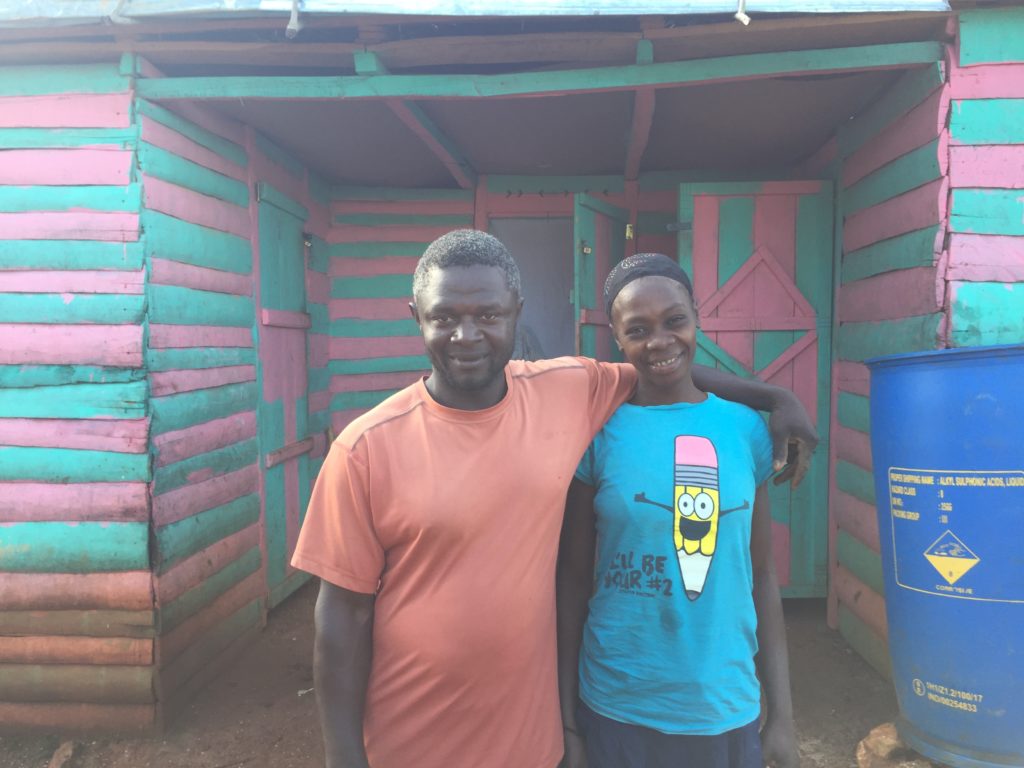 1 thought on “Jeannette André — At Graduation”