AAPLAG divides Lagonav into six zones. The division helps the organization administer its various programs across Lagonav, the large island west of Pòtoprens.

AAPLAG is the Asosyasyon Animatè ak Peyizan Lagonav, or the Lagonav Association of Community Organizers and Peasants. It has been working for years at community development on the island. It has health, agricultural, and environmental programs, but also microcredit and literacy. The adult literacy program is almost twenty years old. It was the first program in Haiti to start experimenting with Wonn Refleksyon back when we first starting creating Wonn Refleksyon in 1997. At the time, the program’s coordinator was Abner Sauveur, who was then and still is the principal of the Matènwa Community Learning Center. The current coordinator is Ezner Angervil, Abner’s former student.

In December, a small group of us led a workshop designed to help this year’s group of literacy teachers use a new version of Wonn Refleksyon with their students. This version would be based exclusively on short Haitian proverbs, which would also serve as reading lessons for the students. We also streamlined the typical lesson plan to make it as easy as possible for an inexperienced discussion leader to follow. (See: Driving the Dog.)

Friday, Ezner and I went out into the field together. We wanted to visit a literacy center to see how Wonn Refleksyon was working. Ezner had seen several discussions in various of AAPLAG’s 17 centers this winter, and had reported that the students really liked the process, that they enjoyed talking about the proverbs, but this would be my first chance to visit one.

We took Ezner’s motorcycle to Zone 1, the easternmost part of the island. It was about a 45-minute ride from Matenwa. 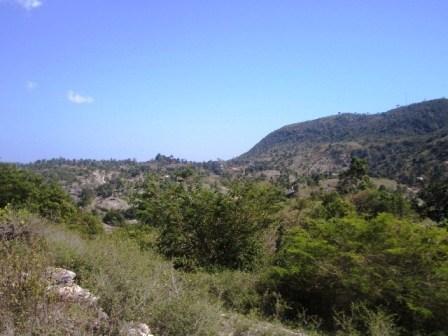 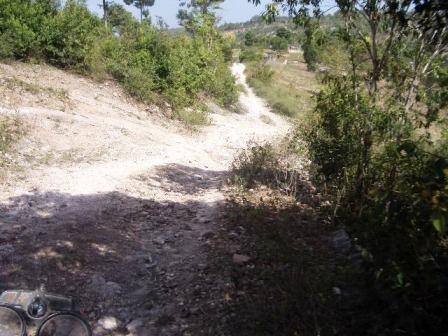 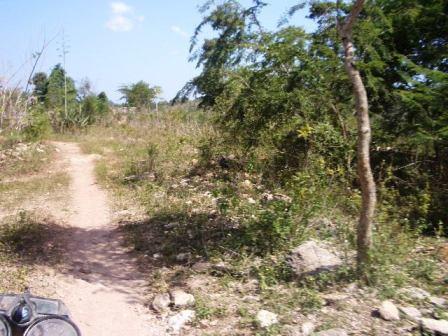 Here’s a view of the church the center is located in. It’s still under construction, but perfectly usable. 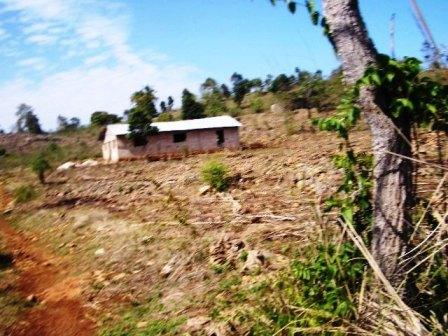 These views of farmland around the church can give something of a sense of what peasants on the island are up against. Soil erosion has been so damaging. This farm looks, more than anything, as though it’s cultivating rocks. 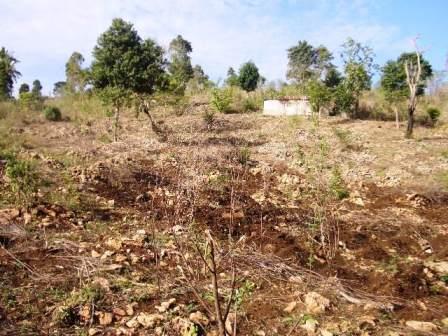 This is the dry season. Though the rains began a couple of weeks ago on the mainland, Lagonav is still waiting. 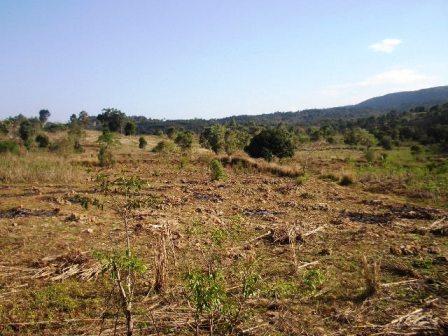 The class started over 20 minutes early because the teacher and most of the students had already arrived. The first thing they did was review the previous week’s work. The students had been writing their names on the blackboard, and two of them volunteered to write theirs. 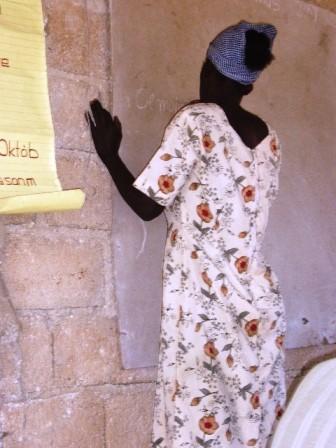 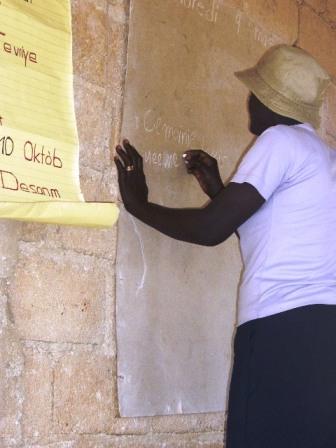 Here one of the women watches as her teacher corrects the way she had written her name. Her name is Neemie, but she had reversed the n and forgotten the i. The correction was very much positive, and she seemed encouraged. 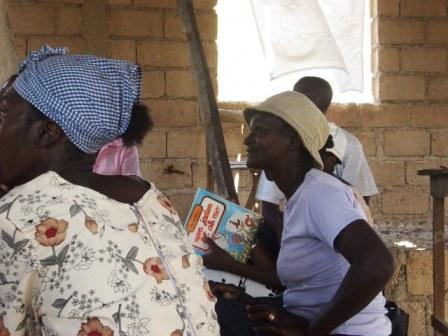 As always in Wonn Refleksyon, the main work is done in small groups, where people get to exchange opinions before the large group convenes. The proverb they are discussing is “//fè koupe fè//,” or “iron cuts iron.” It’s used in a number of ways, but often means something like, “what goes around comes around.” Small group work is a time to begin sharing experiences that relate to the proverb. 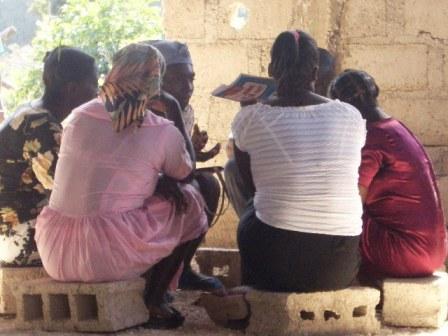 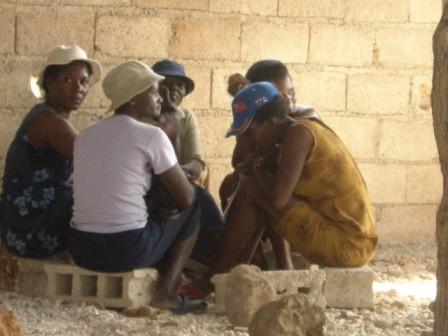 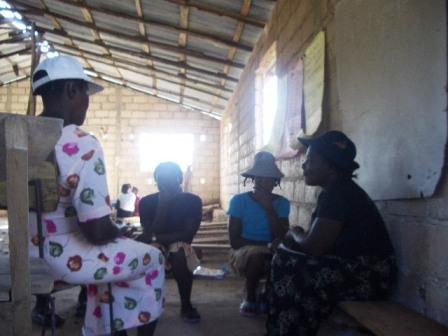 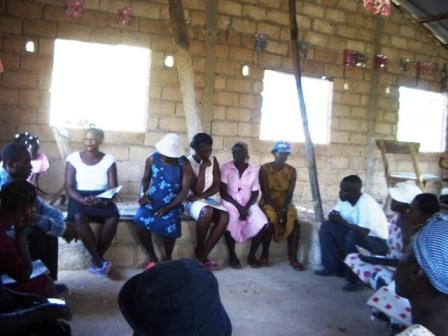 After the Wonn Refleksyon discussion, the group returns to the work of reading and writing. 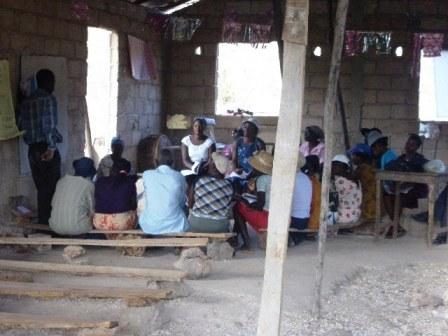 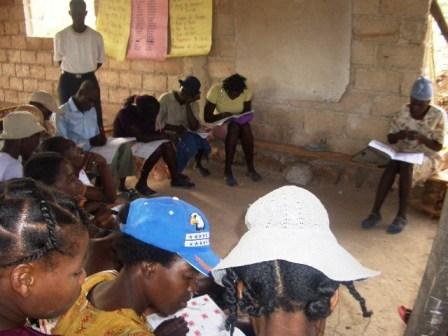 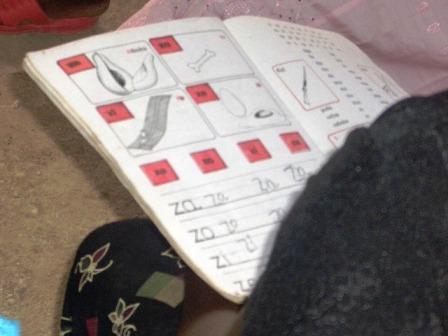 It was a useful visit. The group’s leader managed the Wonn Refleksyon well considering how little training and experience he’s had. He asked for some suggestions, and it was easy to point to a couple of things.

I don’t know whether I’ll get back to that particular center this year. There are, after all, 17 of them, and I’m rarely on Lagonav more than once a month, but Ezner visits them regularly. In the end, the minimum things needed for the Wonn Refleksyon to be process to be worth doing are simple enough that very little support is really needed.