Marie Yolène and her husband are doing well. Their harvest was better than that of most of their neighbors, though her husband reports that it was damaged by a mistake her made. “I planted too much pumpkin in my field, and it crushed some of the beans.” She had already fed the children plantain from their own garden by the time I got to the house in the morning.

It was a good thing they had their own produce, because Yolène explained that there would be nothing to buy in the area around her home on a Tuesday morning. The local merchants buy at markets on Saturdays and Wednesdays, so by Tuesday they tend to be out of most things.

Their home is almost finished. She needs to put a ceiling under the corner of her roof that extends beyond the walls to form a small covered porch, and she needs to install a new door, and she already has the wood she’ll need for the work. She’s happy about the house. She’s already living in it. “We used to get wet all the time. Now I don’t worry about rain.”

Her livestock is increasing. The goats’ progress has been slow. She had to sell off the two we gave her initially because they couldn’t stay healthy. The one kid that one of them produced died almost right away. But her case manager was able to find replacements she could afford that were pregnant already. So she should have young soon. Her pig had eight piglets, and though one died already, she is taken god care of them and has reason to hope that as many as six of the remaining seven will mature until she can sell them. She’d like to sell them off to buy a cow because a cow is the insurance that protects you from every kind of problem and it’s a step towards buying land.

She’s been enjoying her savings and loan association. She goes to the weekly meetings and buys shares. Share’s in hers cost 50 gourds, and members buy from one to five each week. They can take loans from the fund, which they repay with interest, but Yolène is focused mainly on saving. At the end of the year, members of the association will divide up the pot and each will receive a payout that depends on the number of share’s she’s purchased. Yolène plans to invest hers in beans. She’s calculated that the payout will come when the prices are low, and she’ll just hold onto hers until planting time, when the prices are much higher.

Her biggest issue recently has been the health of her son. He felt out of a tree and was cut badly. She rushed him to the Partners in Health clinic in La Colline, but because of the nature of his wound, the boy was referred to the better-equipped and better-staffed hospital in Mirebalais for further tests. When Yolène got to Mirbalais with the boy, she couldn’t get anyone to see him, so she brought him back to La Colline, and they took care of him without the tests they had hoped for. The boy’s now healing well, and Yolène feels good about having gotten him the care he needed. 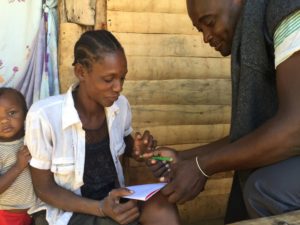