Miramène is moving forward quickly. Each of her goats has given her a litter. One gave her two, and the other only one. So she now has five. Her pig is pregnant and growing. She keeps good track of all of her animals, and is quick to talk to her case manager any time she thinks one is sick. She’s especially excited about her new house. She was the first CLM member in her area to have finished the work.

Her baby’s father came home from the Dominican Republic for a week during the holiday season, and she was proud to show him the progress she had made. He “pote kichoy,” which means that he brought money for his family back with him. So the couple was able to buy all the lumber they needed while he was around. And once all the construction materials are ready, the sort of small houses that our members construct go up quickly. He returned to his job in the D.R. after the week with Miramène and their child, but she says that he plans to return around Easter. He’s promised to bring her enough money to buy a goat. 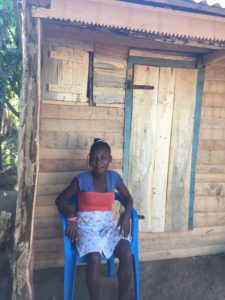 She has been building up savings in the account that her case manager keeps for her, but she doesn’t know how much the account holds. Her case manager gives her the total every week. She just doesn’t keep it in mind. But when I saw the two of them together, her case manager gave her the new total for the week and listed all the deposits he thought she had made. Then she corrected him. He had forgotten one, and quickly added it. So her memory is good enough.

She doesn’t show much interest yet in starting a small commerce. She doesn’t want to wander very far while she has an infant to deal with. Other women might work something out with her siblings or parents, who are her closest neighbors, but she doesn’t seem to want to do so. So if she decide to sell anything, it will be something very small, like cookies or candy that she can sell out of her home. That won’t feed her, but she still shares in the food her mother and older sister make.