I first met Modlet in 2014. Modlet was then in his mid-teens, one of his mother’s seven children. Their father died when he was very young.

His mother and sister had been selected to join the CLM program, and our team had invited them to an initial six-day enterprise training workshop at a school in Mòn Blan, not far from their home. The mother, Charitab, brought him along to the workshop because she didn’t think she could leave him at home. He was sickly, falling down all the time. His balance was bad. He had a hard time feeling his feet. He’d lose a sandal without noticing, and he frequently trip over things.

The area around Mòn Blan is extremely rocky, with steep and narrow footpaths cutting crooked ways around bare ravines. The footing there is tricky for anyone. For him, it had become dangerous.

Gauthier was at the workshop as well, and when we saw the boy we didn’t think we should wait. I put him on the back of my motorcycle and took him to the hospital. It was a hard ride because his terrible sense of balance made him a bad passenger. But we arrived at the Partners in Health University Hospital in Mirebalais.

It was the first of several diagnostic visits. He eventually saw Dr. Louine Martineau together with a visiting American neurologist. And they discovered a serious vitamin B12 deficiency. They started treating it with daily doses, he improved quickly, and the effect lasted for a while. But when the symptoms returned, they switched him to monthly injections. After six months of injections, he was doing much better, and they switched him back to pills, which he continues to take daily.

All this involved a lot of travel between Mòn Blan and the hospital. It’s more than a half an hour by motorcycle, and lines at the hospital can be long, so a visit usually meant at least a half-day’s work for someone on the staff. I was almost always the one. His mother and sister have a case manager, but case managers’ schedules are much less flexible that mine was as a manager, so I could help them out by doing it in the case manager’s place.

As Modlet and I spent more and more time together, a friendship took hold. We talked a lot, and one thing we talked about was school. Modlet was a terrible student. At seventeen, he was still in the third grade. He had had to repeat classes a couple of times because his grades were so bad. Math was especially hard for him. I was a little surprised to discover that he couldn’t do even simple addition.

So we added a math tutorial to our visits. I had him collect and clean twenty little stones, and we started using them to practice addition and subtraction. Sometimes it seemed as though we were making progress, and sometimes it just didn’t. When he got his report card in June 2015, he had failed third grade again.

By then he was eighteen, and I wondered whether it was time to help him and his mother plan a different future for him. Just because he couldn’t succeed at school didn’t have to mean that he couldn’t make anything of his life. I spoke to Charitab, and she agreed. She actually felt more strongly than I did that it was time for him to give up on school. We talked about whether she could give him a piece of one of her fields to farm so that he could start earning money. He had been growing fast and was now a slender but very strong young man. It seemed like a good solution. Someone would have to sell his crops for him, because he had trouble dealing with money, but he had siblings who could do that.

When we talked to him, he listened politely. But when we asked him what he wanted, he asked whether he could try once more to succeed in school. He didn’t want to return to the same school, but there was another one farther up the hill and he wanted to give it a try. He felt really strongly. His mother and I spoke about it, and we both thought it was a waste, but we also thought that he’d never be happy unless we let him try, so she agreed. He registered for third grade in the new school. His older sister took care of getting him his uniform and the books he would need. He was ready to go on schedule in September 2015. 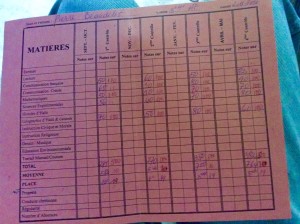 It’s a little hard to figure. He’s now 19, and when you talk to him he can still seem confused. But he works hard and is rightly proud of his success. We don’t know if the same B12 that helps with the nerve problems that were interfering with his mobility also has improved his brain function or if something else has made it possible for school to begin to click