Not every family graduates from CLM.

The record since the program took off in 2007 is striking. 144 of the 150 families who participated in the initial pilot graduated, and the team has maintained that 96% graduation rate ever since. 3395 families have succeeded thus far.

The criteria are straightforward, nothing fancy. A family must be eating at least one hot meal every day. They must have two sources of income and $185 worth of productive assets. They can have no untreated cases of malnutrition and must be living in a house with a good tin roof. We want the woman of the family to have a plan for the future and the confidence to know that she can succeed.

But that leaves about 4%, or about 140 families, who haven’t graduated. That’s really a lot.

They fail to graduate for lots of reasons. For some, the case manager has failed to establish the trusting relationship that our program’s work depends on. We had a member named Marie who went behind her case manager’s back and sold all the goats that we gave her. He continued to try to work with her, but her dishonesty continued. And that was when he was able to see her. Much of the time, she ducked his weekly visits.

We don’t know as much as we should about the women like Marie, about what they do after their cohort graduates. We have anecdotes that suggest that many continue to make progress. Marie herself finished building her house after we had moved on, and she continued to build up her charcoal business as well. But we don’t have the resources to ensure follow-up.

But Mimose is doing ok.

She and her husband Wozèn live in Mazonbi, a remote area at the end of a rocky, twisting road that follows a secondary ridge northwest from Gran Boulay, a village on the mountain that separates the Central Plateau from the plain that contains the suburbs north of Port-au-Prince. When they joined our program in June 2013, they had three small children. She had once had a small commerce, but had lost the money one day when she was at market. Then she became pregnant with her last child, and couldn’t really move around. The boy was born right before she entered the program. Wozèn took on the whole responsibility for supporting the household by farming their small plot, and doing day labor in their neighbors’ fields.

The issues that interfered with her graduation were nothing like those we saw with Marie. We evaluate women after twelve months to see how much progress they have made towards the program’s goals, and at the twelve-month mark Mimose was ready to graduate. She and Wozèn had worked hard to build a well-constructed two-room house, using money she saved from her weekly stipend to making it larger than most of the houses that CLM members build. She was once again managing a small commerce, and though she had had trouble with her goats, she had enough assets overall to meet our graduation criteria. 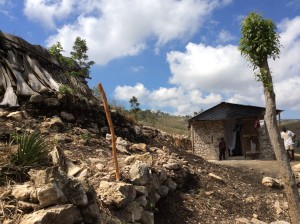 But then she ran into problems. She and Wozèn chose not to use contraceptives, and she became pregnant once more. The pregnancy made it impossible for her to get her small commerce to market – each of the local markets she sells at is a considerable hike from her home at the lower end of Mazonbi – and the money that she had in it frittered away as she and Wozèn worked to cover household expenses.

She and Wozèn had been struggling from the start to make something of their investment in goats. A jealous neighbor had killed three of them, and though they pursued restitution with their case manager’s help, the most they could get to replace their losses were two small goats that the man’s aunt gave them so that he could avoid prison. They reluctantly accepted the aunt’s offer because she had been a very good neighbor to them for a long time. They thought they owed her their cooperation. Shortly before the 17-month evaluation, which would determine whether Mimose could graduate, the two replacement goats died.

So the only productive assets that they had were a couple of chickens from a flock that the couple had been keeping to provide Mimose with the extra protein she needed during the last stages of her pregnancy, and a field they had planted with beans. It was less than our graduation criteria demand. The last thing we were able to do for her before we left Mazonbi and its environs was to arrange for another CLM member to give Mimose two more goats so that she and Wozèn could get started once more.

But it didn’t take long for them to begin to build their household back up again. Mimose gave birth to a healthy baby, and decided that her fourth child would be her last. The couple made the effort to get her to the hospital in Mirebalais for the childbirth, and she had the doctors their tie her tubes. “Four children is enough,” she explained. Wozèn added, “Children are expensive. They have to eat, and they have to go to school.”

While she was in the last months of pregnancy, Wozèn took good care of their new goats, and they grew quickly. But he and Mimose were constantly concerned about goat thieves. The area around Mazonbi is spotted with little hills and valleys. Wherever they might choose to tie their goats to graze, the goats would be hidden most of the time. And there are numerous little paths that lead to Croix-des-Bouquets and Titayen, easy routes to market for someone who decides to lead away a neighbor’s goats. So they sold them and looked for another way to invest the funds.

Then a neighbor asked them about farming a field that they could not afford to plant, and they agreed to rent it to him for two years. They took the rental money, added the money from the sale of the goats, and bought a cow. They paid a lot for the cow – about $260 – but they thought it was a good investment. “It’s a big cow,” Mimose explains.

And now Mimose is ready to get back into her commerce. In the coming weeks, she plans to apply for a loan from Fonkoze, once again joining the women who were in CLM with her. She’ll send Wozèn to purchase rice and beans and other basics for her in Croix-de-Bouquets, and then she’ll bring them for sale in the local markets in Labasti, Dalon, and Ti Sekèy.

We’re optimistic about Mimose. She and Wozèn work hard and together, and they learned enough during 18 months with their case manager to have an excellent chance to succeed over the long term.