One of the important pieces of the package of support that CLM offers to members is home repair. When members talk about the program, they consistently cite their new home with its good tin roof as one of the biggest changes that CLM has brought into their lives.

And it’s easy to understand. Most of the families we select for the program are living in terrible circumstances when we find them. Their shacks are thrown together out of the materials they can find: straw, sticks, and palm seedpods. Some of the women have the energy and the focus to make something more-or-less habitable out of the very limited resources available, but it is striking how many of them don’t. They fail to see the opportunities that even they have to make minor repairs to their houses because the small improvements in comfort or security that they could achieve are hidden by the daily search of something minimal to eat. Patching a roof or a wall, even when it would be helpful and easy, can’t seem very important to someone who has nothing to feed her kids.

All that is before women join CLM. We think of home repair as important for at least three reasons. First and most importantly, it is preventative healthcare. Families cannot stay healthy without a dry place to sleep. Second, it is economics. Members cannot engage in small commerce without a reasonably secure place to keep merchandise and cash. Finally, it is a matter of dignity. It is hard for a woman to become and to feel like a well-regarded member of her community if she lives in a shack that neighbors will always look down upon.

At the same time, we don’t look at housing as something we can just do for our members. They need to get used to doing things for themselves, and home repair is a good place to start. We give them roofing material and nails, and we pay the builders who put up the walls and raise the roof, but the members themselves have to provide the lumber they need along with the mud, rocks, or wood that they use to make the walls. It’s a big investment for our program: something like one-sixth of our total budget. And a big investment for our members: collecting the lumber and other materials can involve hard work, relatively big expenses, or both.

Here are some photos of homes before CLM home repair and one before-and-after shot: 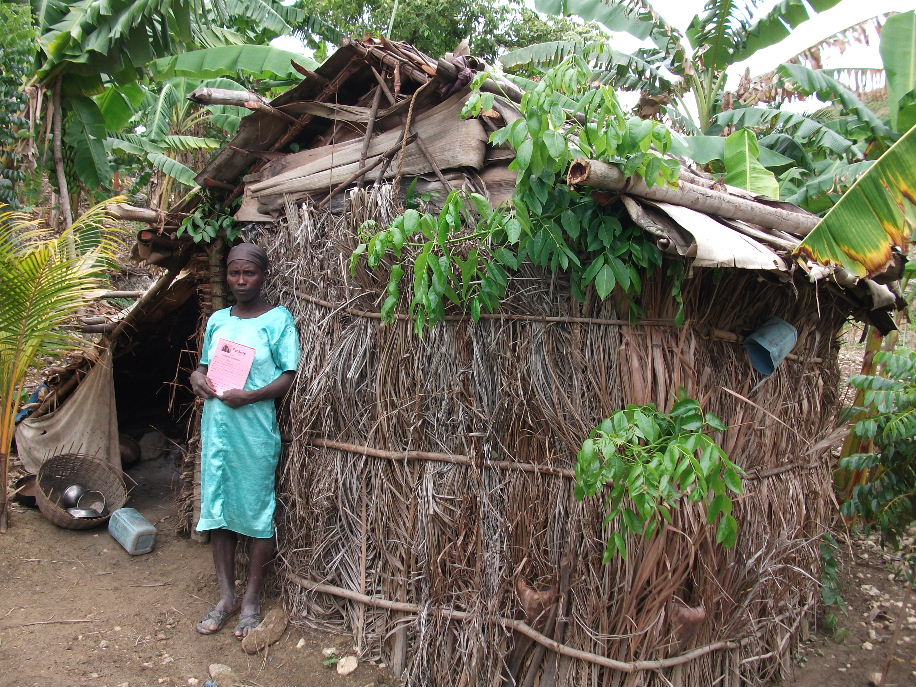 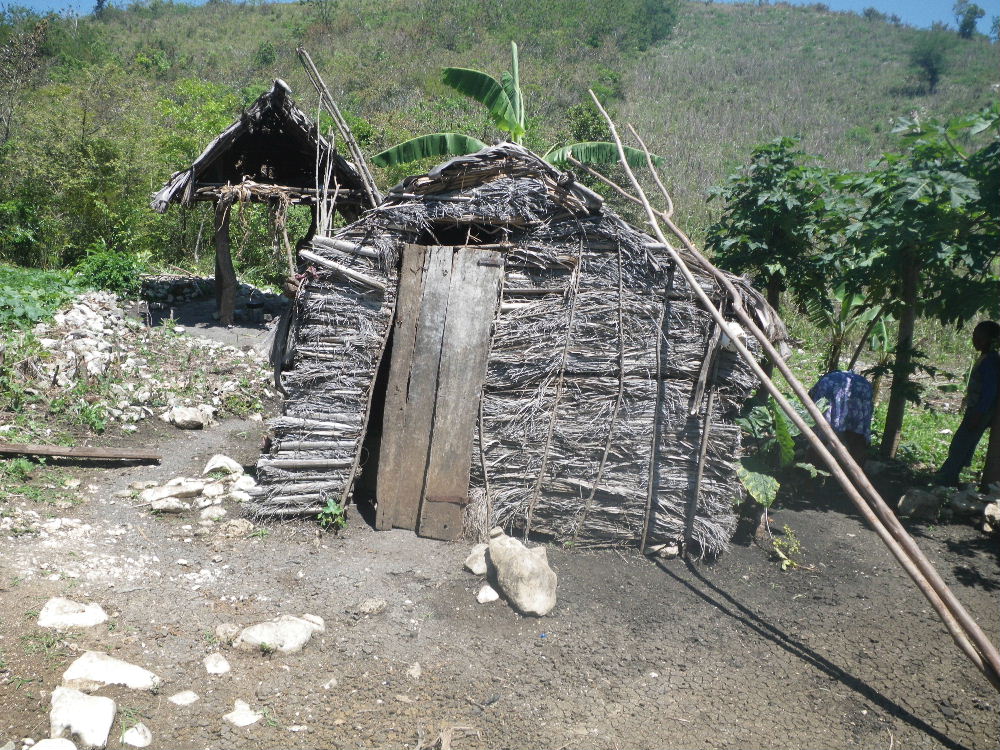 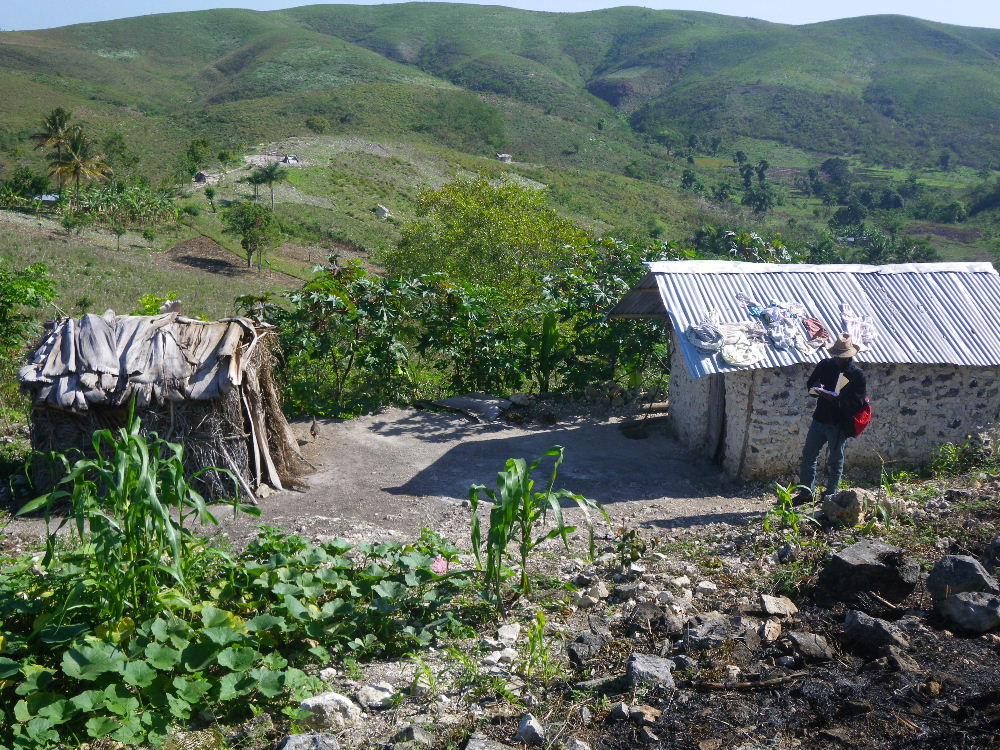 All this is just a way of explaining why Monday afternoon’s activities in Bay Tourib seemed so odd. I went to two different CLM homes with a team of case managers and a carpenter who’s also a member of the local CLM support committee, and we removed the roofs from the houses and walked away with the tin.

The first case was straightforward, and we felt good about it. A CLM member had built her house on land that belonged to her partner, next to his mother’s house. He was abusive, and she had had enough. She wanted to leave him, but was worried that she wouldn’t be able to rebuild what she had with him. She was afraid to go by herself to take the assets that CLM had given her. So she talked to her case manager, and he talked to the team. He also talked to the man. The result of it all is that we went to the house as a team, with the man’s agreement, and collected her things: the tin roofing material, the roofing nails, some cement, her water filter, and a few personal items. There was a large and loud crowd, but the only sign of conflict was an argument between her and the guy’s mother over ownership of a spoon.

The second case was much more difficult. Moïse and his wife were selected for CLM because they were having a hard time just feeding their kids. A few months into the program, Moïse’s wife left him.

Normally, CLM would continue to support the woman, but we couldn’t in this case. She had abandoned Moïse and all their kids. So we decided to stick with the children, registering a daughter as the household’s nominal member. Titon, the case manager, would meet weekly with Moïse and the little girl, and they would come together to CLM trainings.

But it hasn’t worked out.

It isn’t that unusual for CLM members to be dishonest early in our experience with them. Why would they trust us? What must look like the best things we do for them — giving them assets to manage and home repair assistance — must also look too good to be true. Especially when they are surrounded by jealous neighbors, who are encouraging them to believe that we are up to no good. Distrustful members will sell a goat and then lie to us about it, claiming it was stolen or that it died. They decide to burn through their assets before we take them away again. Generally, we stick by the members as they learn that we are really looking to support them over the long haul, and things work themselves out.

Moïse’s case didn’t work out. He sold two of his daughter’s goats, lying to Titon to hide what he had done. When Titon confronted him with evidence that he’d sold the goats, he changed his story, claiming that he had sold them because he had an urgent need for cash to by clothes and supplies to send his children to school. When Titon spoke to the children in his absence, they denied that their father had given them any of the things he had pretended to buy. Titon confronted him with this additional lie. By that time, Titon had spent some time asking around, and he learned that Moïse had spent the money on another woman he was trying to attract.

Moïse agreed to buy a goat to replace at least one of the ones he had sold off, and Titon agreed to keep working with him. A couple of weeks later, Moïse showed Titon the goat he had purchased. Titon asked to see the goat’s papers. He wanted proof that the goat in fact belonged to Moïse, and when Moïse showed them to him he hoped that he had worked through the worst of the lying and that they could now move forward. He decided to hold onto the papers for a little bit just to be sure.

His hope didn’t last long. The goat, it turns out, belonged to one of Moïse’s neighbors, an older woman who had asked Moïse to look after it for her. He convinced her to lend him the goat’s papers as well, but when she asked him to return the papers and he had to explain that he couldn’t, she decided to make a lot of noise.

For Titon, it was the last straw. He felt he needed to do something to show that the agreements we make with members mean something. They sign a contract in which they promise not to sell the assets we give them without our permission. Not only had Moïse broken the promise more than once, he had lied about. Other nearby CLM members were also telling Titon, who is loved and respected by most, that Moïse had been encouraging them to do as he had done.

So we decided to suspend Moïse and his family from the program. We went to their home, removed their roof, and took their water filter. Their two remaining goats are already in the hands of a committee member, who’s holding on to them pending a final decision.

Taking the roof off a poor person’s house is very far from what our role should be. Moïse’s yard filled with neighbors as we worked, talking quietly and staring in disbelief. After we had removed the first few sheets of tin, I heard someone say, “//tout bon//?” That’s like asking whether what she was seeing was real. Would we really carry out the threat Titon had been making to remove Moïse from the program? I think we did the right thing. I don’t think Moïse left us any choice.

But I was chatting with another CLM member as we were removing the roof, and we had to agreed that it was an ugly, if an appropriate, thing to do. It’s the wet season, and as heavy rains fell late that night, I had to wonder how Moïse and his children were making out. I was dry, lying in a comfortable bed, in the residence we share with the Partners in Health medical staff.