Approaches like our CLM program in Haiti are generally referred to as “graduation programs”. The idea is that program participants start at the very lowest end of the economic ladder and they graduate by moving up a step or two. They are still very poor, but their lives have changed.

At Fonkoze, we have thought of graduation as a mark of a graduate’s independence. Graduation programs are sometimes presented as an alternative to long-term support. Rather than regular cash transfers that could extend over years, a graduation program makes a greater up-front investment in a family, hoping that one big push will be enough to help them make their future on their own. At Fonkoze, and at BRAC, the Bangladeshi development organization that invented the approach, participants can graduate to other programs. Both BRAC and Fonkoze offer microcredit to graduates who wish to use it. But more fundamental than the step from one service to another is the change from a misery that is often without hope to a resilient and optimistic approach to a still-difficult life. The evaluation we use to determine whether someone can graduate from our program includes ten different criteria, and participation in microcredit is not one of them. Many of our more successful graduates are moving forward without microloans.

But our experience with persons with disabilities has forced us to change our thinking. We are in the midst of an experience with 30 persons with disabilities. It’s an attempt to adapt the CLM program to serve them. It was originally planned as a twelve-month program, but when the work was set to be finished, our team decided to extend the work for another six months. A detailed evaluation of the pilot is available here: http://www.microfinancegateway.org/library/final-evaluation-chemen-lavi-miyó-persons-disabilities-clmd.

There are cases that are easy to adapt to. Carmelle Jean, a partially paralyzed woman from Ti Fon, is unable to manage her livestock. Her mobility is too limited, as is the use she has of her hands. According to our original CLM principles, she would not graduate because one of the minimum issues is that a graduate be healthy enough to do the work she’ll need to do. But Carmelle has shown herself to be capable of mobilizing and managing help from her neighbors and their children. Her livestock is well managed, even if she cannot do the work with her own hands. Working with Carmelle taught us to consider the ability to do the work differently than we previously had, but it was an easy lesson to learn. 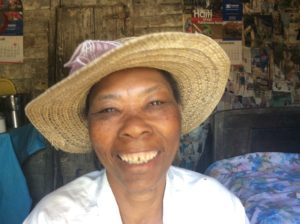 There are more difficult cases too, however. Josué is from Loncy. He’s the widowed father of four teenage and 20-something sons. He’s much more profoundly paralyzed than Carmelle. He can do nothing on his own. The boys feed him, they wash him, they dress him: they take care of all his needs. He lacks Carmelle’s skills as a manager as well. She knows exactly wants she wants done and when, and knows how to see to it. She really does manage her household, not just her livestock. Josué is completely dependent on what his sons decide.

He would not be able to graduate from our program according to our original standard. He does not manage his enterprises with his own hands, nor does he even do so a step removed, as Carmelle does.

But the change in Josué’s life has nevertheless been profound. When we first met him, he was spending all of every day inside a windowless, one-room shack. He wouldn’t talk to staff members who tried to interview him. He told them they were wasting their time. He didn’t bother to get dressed or clean up. He didn’t try to take any part in the life going on around him.

All that has changed. He now gets up early every day, gets cleaned up, and has his sons put him out in a shady spot in the front of their home, by the side of a main road. He spends the day chatting and joking with neighbors. He enjoys himself. He has his sons carry him in his wheelchair to occasional community celebrations, where he drinks and gossips with other older men. He eats a hot meal every day now, and he has a pig and goats that his sons take care of for him.

If graduation means achieving a measure of independence, Josué has not succeeded. But if it means graduating from one way of life to another that is distinctly better, than Josué has been a remarkable success.