At eleven years old, Vagens is already an experienced vegetable gardener. He lives with his mother and his older brother in a small one-room house on the road leading to Matènwa, on the rural Haitian island of Lagonav. He’s had his own garden at home since early 2005. In Matènwa, where planting can go on year-round as long as there’s water, this has meant that he’s already a veteran of five harvests. 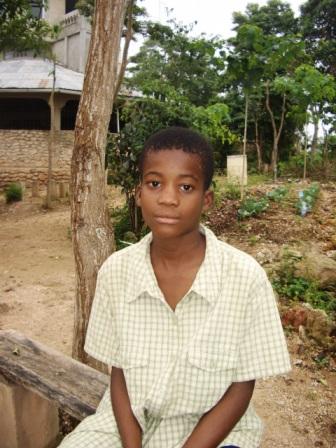 He’s is a sixth grader at the Matènwa Community Learning Center. The Center is comprised of a primary school and a middle school. It hosts an adult literacy class, and runs a range of community education and development programs as well. The school is devoted to providing a non-violent, student-centered education tailored to the needs of the rural community it’s in.

This simple mission runs directly against the current of almost all Haitian education in three ways. First, Haitian education, especially at the primary level, is violent. Beatings and humiliations are standard pedagogical techniques, used to combat everything from misbehavior to failure to memorize one’s homework. Second, classroom practice is neither student- nor even teacher-centered. It’s text-centered. Students whose language is Haitian Creole memorize passages in French that they rarely understand either from textbooks or from summaries that their teachers write on blackboards. Third, those texts are not tailored to the communities they live in. They rarely have anything to do with the realities that children face at all. They have been designed, as have a host of customs, including strict dress codes, to prepare students to enter into someone’s image of what proper society is. And proper society is almost always urban society, not the very rural world of Matènwa.

On first looking at Vagens, an American might think him a typical sixth-grader, even if he’s just a little small. But this appearance masks a larger truth. Before the Matènwa school was founded, about ten years ago, children in the area had only limited access to formal education. In the school’s first years it was filled with overage children, kids who had not been able to start school on time and who were, therefore, well beyond typical school age. So if Vagens is now a typical sixth-grader, that is only because the school is largely succeeding in getting local children into kindergarten and first grade on time.

Vagens learned to garden right at school. The school’s vegetable garden is one way it teaches its students to appreciate their rural community. It also teaches them a skill that can directly improve their lives there. It provides much of the food for the school’s meal program as well.

Vagens learned how to create beds of decent soil, how to plant the seeds and to take care of the young plants. He decided to try it at home. He planted carrots and cabbages. He made juice with his first carrots, and ate his cabbage with cornmeal or beans and rice. He’d like to try planting eggplant soon. He likes eggplant, and wants to grow his own. His only frustration has been with the goats that sometimes slip the cords he ties them with and eat his young plants.

“Growing food in your own garden feels great,” he says. “You get to eat vegetables without spending money to buy them in the market.”

At fifteen, Resena is a fifth-grader at the Matènwa school. She’s not originally from Matènwa. She was born in Arkaye, an important coastal market town across the bay, on the Haitian mainland. As a little girl, she was sent to live with distant relatives when her father and several siblings were killed in a boating accident. She’s been at the Learning Center since kindergarten. 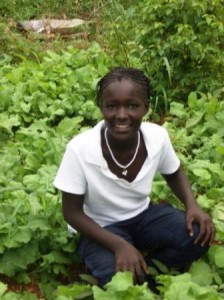 Life in Matènwa has be hard for her. Though the family that took her in sent her to school, they can be neglectful in other ways. This year, Margaret, the Learning Center’s head cook, a woman with three children in the school, and who is herself a fifth-grader there, was walking by the house Resena was living in when she heard her cry out. She went to see what was wrong, and discovered that Resena had been left-alone. Her adoptive family had gone to Pòtoprens and left Resena all alone. She was being harassed by a group of teenage boys, and was struggling to defend herself.

Margaret did not hesitate. She told Resena to collect her things, and brought her to live in her own already-crowded home. Resena suddenly seems like a happy child. The Learning Center’s Principal, Abner Sauveur, says she’s a very capable student.

Like all of the school’s students, Resena regularly works in the garden with her class. It’s work she loves. “We take such good care of the garden. The plants don’t die.” She especially likes working in the cabbage because she likes eating it when it’s ready.

She tried to start her own garden, but it was ruined by chickens. Now she’d like to try again, but wants to fence off a little plot before she plants it.

For more information about the Matènwa Community Learning Center, go to http://www.matenwa.org or e-mail its American Co-Director, Chris Low, at [email protected].