Even just getting to the graduation in Boukankare was challenging. Boukankare is in the lower part of Haiti’s central plateau, one of the poorer regions of this very poor country. It has a Fonkoze branch in the front yard of a clinic run by Paul Farmer’s organization, Partners in Health. Farmer, it’s said, was tired of seeing patients cured of diseases only to die of poverty instead. He recognized that financial services are critical to a community’s health, and so he invited Fonkoze’s collaboration.

The branch cannot be said to be in any kind of a downtown. It’s not in a village center, nor even at a crossroad. It’s just along a road, one made of loose dirt and rocks, that branches off of the major road between Pòtoprens and the important inland city of Ench. It winds up, down, and around some pretty rough terrain, fording a couple of streams. In times of heavy rain, it can be impassable.

But the area of Boukankare served by Fonkoze’s Ti Kredi (Little Credit) agents is remoter still. It’s especially hard to reach from the Boukankare branch. Instead, one takes a short ride straight west out of Mibalè, along one of the best major roads in Haiti, the one from Mibalè to Ponsonde in the Artibonite Valley, Haiti’s major rice-growing region. Then you get out of your vehicle, and cross the Artibonite River in a large canoe. 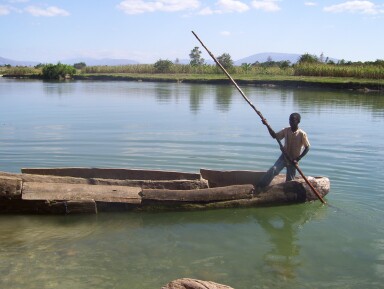 On the far side of the river, there are no roads, only footpaths. The getting to the graduation meant a substantial walk. The graduation was organized in the structure that the credit center meets in. It’s just a roof on some poles, but for the graduation the women had pooled their bedspreads and tablecloths to create a multicolored building with a style all its own.

The women had invited their families, friends, and neighbors, so by the time things we were ready to get started, there was quite a crowd. 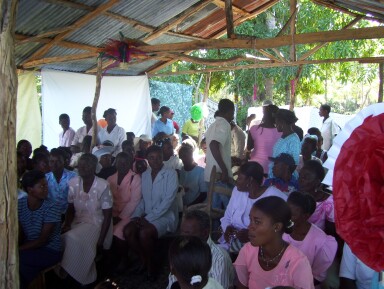 It was a fairly formal occasion. The guests were well dressed.

Here are the graduates, with Fonkoze’s Executive Director, Anne Hastings, in their midst. She led the delegation I accompanied from the central office, in Pòtoprens, to join the celebration. 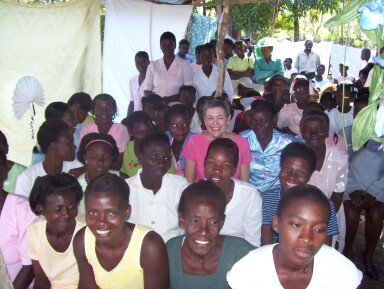 The graduation proceeded as such events generally do. There were speeches, the first one by the Center Chief, the woman whom her fellow members the had elected to represent them in their dealings with Fonkoze. 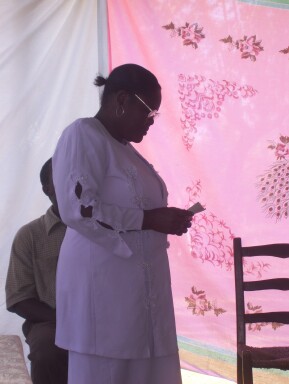 The second speech was something like a valedictorian’s address, a long and formal speech by one of the women who belong to the center. I don’t know how she was selected, but she read her address well, which is remarkable since few of the Ti Kredi members can read at all. 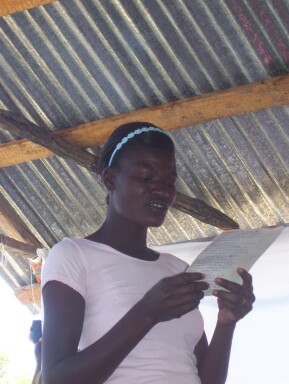 Then two of the women gave testimonials, describing what Ti Kredi and Fonkoze had done for them.

The leaders of each of the five-women solidarity groups are called “manman gwoup”, the group’s “mothers.” They each received a certificate, recognizing them for their leadership and their service. 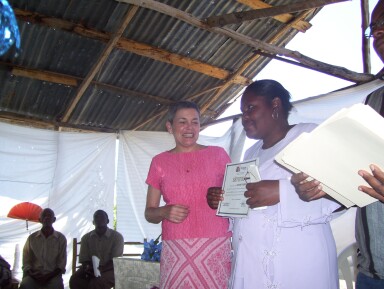 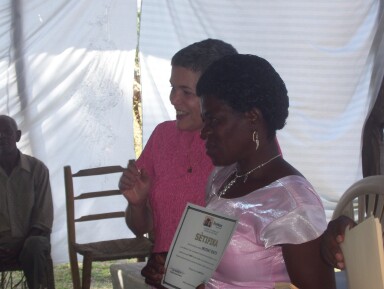 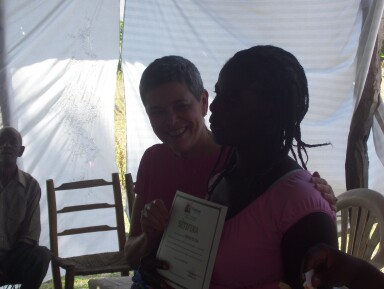 Special recognition was given to the one solidarity group that didn’t graduate. This deserves an explanation. They didn’t graduate because they fell slightly behind their repayment schedule, and they fell behind because one of the five original members of the group fled the area, without making a repayment on her second loan, worth about $40. Solidarity group members sign as security for one another’s loans, so her defaulting left the other four group members with an extra debt.

The women pitched in, dug into their savings, and made most of the loan good. The rest of the credit center gave them a hand to complete repayment of the bad debt. They then took their third Ti Kredi loan about a month late. They’ll graduate in early March. (See: The Non Graduate)

At the end of the ceremony, there was a magnificent feast. 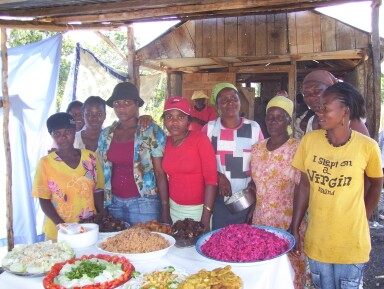 In academics, we don’t tend to say “graduation.” We prefer to use the word “commencement” instead. I think we do so for good reason. What matters at such moments is less the course of studies one has completed than the new challenges that lie ahead. Those challenges are, after all, what the education was for.

The Ti Kredi ceremony was similar in this respect. There was as much talk among the women about the gwo kredi, or “big credit” they were preparing to enter as there was about the program they had completed. That fact itself reflects one measure of the program’s success: It is giving its participants the sense that they can move ahead.