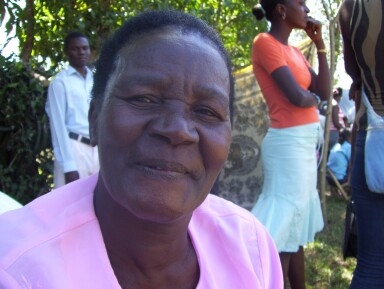 Asilia is a proud mother of four, all of whom are either finished with school or well on their way. She and her husband have sent them to school by working together. Each has had a business. She sold charcoal by the sack to retail merchants in Mibalè, buying them in various corners of the countryside, and carrying them to the market each week. She would also buy fowl – chicken, guinea fowl, and the like – from the folks in the countryside and carry them to the same markets. She told me she might carry more than a dozen large chickens on her head. Her husband sells pills – assorted pharmaceuticals — out of a bucket he carries from market to market in the region.

For whatever reason, her business activities collapsed. The capital she ran them with evaporated. So she was full of know-how, but had no way to put her experience to work. She had no way to earn any income at all.

That’s when she heard about Fonkoze’s Ti Kredi program. It’s a solidarity-group lending program that features extra-small loans and close accompaniment from a specially trained loan officer. Loans start at about $30. The loan periods are short, and repayments are frequent.

Asilia joined together with four other women. They had no need to find co-signers, nor to put up collateral. The five of them guaranteed one another’s loans. That’s one of the reasons it’s called “solidarity-group” credit. The women depend on the solidarity that develops among them, and the lending institution depends on it as well.

Most of the time, reliance on that sense of solidarity is unnecessary. Muhammad Yunus , the founder of the international microcredit movement, which now serves hundreds of millions of families worldwide, has said, “The poor always repay.” And that’s almost true. International repayment rates for microcredit far exceed anything a traditional lender could hope for.

But Asilia’s solidarity group ran into a bump in the road. One of its five members was new to the Boukankare region where Asilia lives, and the other four women didn’t know her well. Generally speaking, Fonkoze insists that fellow group members be close friends, but for some reason that didn’t happen in this case. The new woman paid her first loan on time, as did the rest of the group. The five of them then took their second loan, for just over $40 each. It was to be repaid over the course of two months.

According to Asilia, the woman “wasted” the money. This might mean that she used it to do something important, like buy food for her family or pay for her children’s schooling. But whatever she did do, what she did not do was invest it in her business. When it was time to make the first repayment on this second loan, the woman had nothing left. She left the area, and they haven’t seen her since.

Asilia and the other three remaining women repaid their part of the loan on schedule, but they couldn’t get new credit because the other woman’s $40 plus interest was missing. Fonkoze makes its loans to the groups of five women, not to the individuals they comprise. Therefore, a loan isn’t fully repaid until all five women have repaid their shares. So the four women got together and divided the remaining debt. They exhausted the little savings they had begun to accumulate while repaying the first one-month loan, and it was almost enough to cover for the missing woman. But it wasn’t quite enough, so they appealed to the other members of their center.

A center is a collection of six-ten groups of five. The center meets regularly with the Fonkoze credit agent who serves them. They also work together as they receive the educational services that Fonkoze offers. Finally, the center is also a place where individual women, and solidarity groups as well, can share their problems and their success stories as they try to make progress together. In this case, the rest of the center was willing and able to make up the difference between the debt that the woman left her group and what the group was able to come up with.

But not a moment without hope. Asilia and her group eventually took out their third and final Ti Kredi loan about one month late. They are now scheduled to graduate out of Ti Kredi in March. It probably won’t be a big celebration, but it will be a very happy day nonetheless. 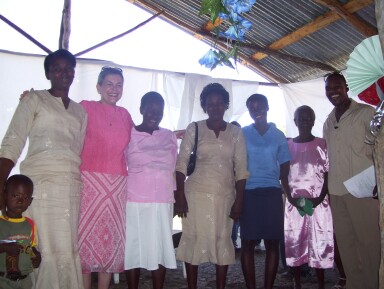 Asilia’s Solidarity Group with Fonkoze’s Executive Director, Anne Hastings, and the Manager of the Boukankare branch. They have a young admirer on the far left.

Asilia is glad to have discovered Fonkoze because it’s given her a second chance, a way to get her business started again. “Fonkoze helped me start small,” she says, “and it’s giving me a way to make my way. I will move forward as far as I can go.”