Pascal has been a case manager for Chemen Lavi Miyò for almost four years. He is one of the original six who were hired to shepherd the 150 women in our pilot through the process. He had been one of Fonkoze’s best credit agents before that. The results of the pilot were striking, with 142 of the 150 families graduating on time. That means, that the women who led those families had accumulated the resources – financial, personal, and social – to support themselves. A remarkable success for women who entered the program with nothing.

Fonkoze spent a lot of time struggling to raise the money needed for the major program scale-up that brought me to CLM. But the work didn’t stop during that interval. We stitched together enough financing to serve 250 members, which was already a big increase. So Pascal and some of the other original case managers just kept working. While most of our team is selecting new members, Pascal and others are well into the eighteen-month cycle with this 250. By early 2011, he will have accompanied his second group of families through this program.

He spends most of his days just visiting the families, moving around enough on foot and on motorcycle to ensure that he sees each of the members he’s responsible for at least once each week. These visits are the heart of the CLM program, because for all the asset transfers and home repair and health interventions and other things we do, unless we accompany our members very closely as they learn to use their new resources to manage their lives, they will fail. Weekly visits allow Pascal to help them keep close track of their businesses’ development, but also to brainstorm with them about the considerable problems they face in their daily lives and to plan.

On the day I went around with him, his first visit was with Gertha. She is a mother of six who’s eleven months into the program. She originally received three goats and 1500 gourds – about $37.50 – worth of merchandise to start a business with. She now has seven goats and a cow to go with about 2100 gourds worth of inventory and cash in her business. She started selling rice and oil, and still does so, but when she sees a chance to buy some fruit, she grabs it because she knows she can turn it over quickly. She also buys a kind of palm leaf that she braids to make sleeping mats. She now supports her family fully with the income from her business, using her livestock only as long-term investment. She and Pascal spoke about an experiment he arranged for one of her older sons, a young man who’s 19.

CLM had provided her the material and the money she would need for minimal home repair. Most of the families who enter our program live in homes that do not protect them from the elements. The roofs leak. The thin walls are cracked. The mud floors ensure an environment that’s bad for everyone’s health. CLM wants its members to live in homes that are shelters, homes that give them a chance to protect both their health and whatever merchandise they have on hand.

When he was helping her plan her home repair, Pascal found Gertha a young carpenter who was willing to take on her son as an apprentice. He worked hard enough that the carpenter was impressed, and now he takes the young man to other jobs. He and his mother are both excited that he is learning a profession that should help him support himself down the road.

Another of member whom Pascal visited that day was Julienne. She also received three goats and 1500 gourds when she started the program. She now has five goats, a cow, a pig, and 3500 gourds in her business. But during his visit, Pascal uncovered a problem: She’s been making a lot of her sales on credit. Of the 3500 gourds in her business, over 1300 are in her customers’ hands. It’s a dangerous situation, because even if they pay her eventually, they are reducing the amount of merchandise she can buy and, so, the amount of money she can make. And she would be able to feed her family if the income drops too low. And that’s a best-case scenario. The customers who owe her money could always fail to pay her at all.

So she and Pascal talked about why she sells on credit and why she probably can’t eliminate the practice entirely. They agreed that she would need to reduce the percentage of her sales that she makes that way. It is the only way to ensure that she keeps moving forward.

Pascal, like all CLM case managers, has only 30 minutes to meet with each member because he must see 50 of them every week. There’s always a lot for him to accomplish in the half-hour. He needs to talk with members about their investments, but also about their health, their children’s education – about all the aspects of their lives that CLM aims to help them improve, which is everything. Using those 30 minutes well might be the key to Pascal’s success 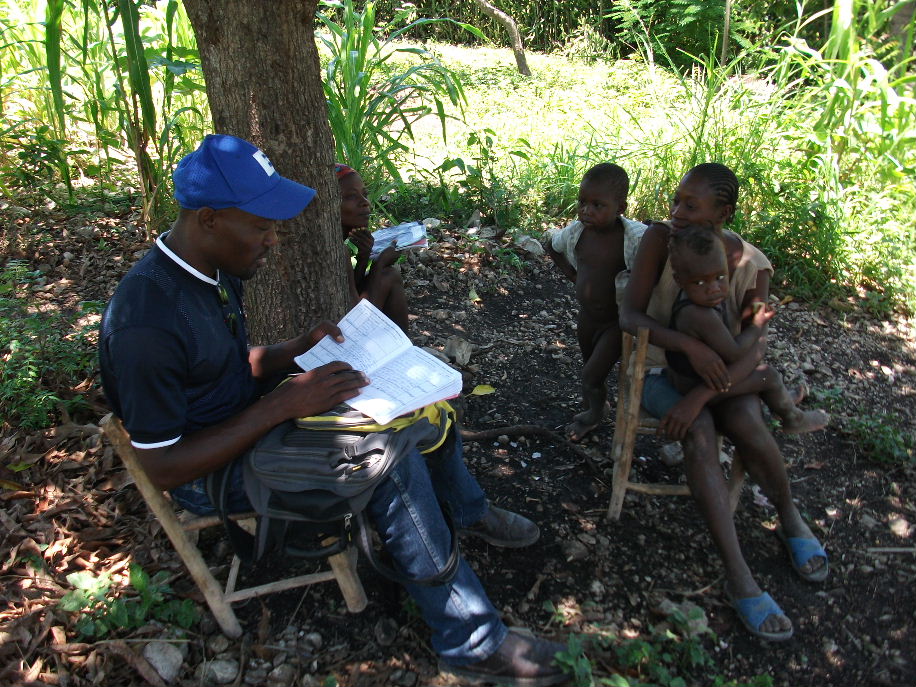 Pascal makes notes about problems CLM members are encountering and the decisions they make to combat them in their notebooks. On subsequent visits, CLM staff will check to the notebooks so that we can be certain we’re following through.