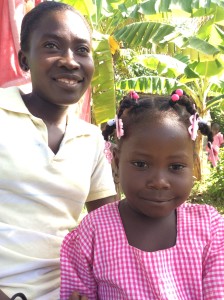 Ytelet is from Zaboka, a village hidden among the steep valleys of eastern Tit Montay, Boukankare’s most remote rural section. The road to Zaboka is a long, difficult hike. Neither cars nor motorcycles can get there. But the CLM team can.

Before Ytelet joined the program in December 2010, she really struggled. She was trying to take care of her own child and of her younger brother, Dieulonet. But she had very few resources to manage with. “There were times when you’d look up, you’d look down – you’d look all around – just to find a little change you could use to buy the kids something to eat.” She and the children would go days at a time without eating a meal. Persistent hunger left her and Dieulonet so weak that a minor fever nearly killed both of them in the program’s first months. Only the determination of her case manager, Martinière, to carry her to a hospital that was hours away saved her life. As she said at her graduation ceremony in the summer of 2012, “Without Martinière, I wouldn’t even be here. And nobody would know that I matter just like everyone.”

Ytelet flourished in her time with the program, but not in the way that one might expect. She chose goats and a pig as her two enterprises, and neither developed very quickly. After a year, her two goats were still two goats. And her pig made less progress than that. A first one died, and she struggled to collect enough money to buy a second, smaller one.

But she and Martinière looked at another area where he saw she could improve her life. Even before she joined the program, she would farm to try to feed herself and the kids. She had no land, but she would plant beans – the most important cash crop in the mountains of Central Haiti – as a sharecropper. “I might harvest a bushel or two, but I’d have to give half to the landowner.” What’s worse, without cash, she’d have to buy the seeds on credit, and the standard interest rate on seed loans in the Central Plateau is a flat 100%. “I couldn’t get ahead.”

Martinière realized that Ytelet could do much better with her farming if she had cash to invest. So they came up with a plan. Ytelet would work hard to save money from the weekly stipend she’d receive for the first six months of her time in the program. She eventually saved up about $30.

She used that money to help herself in two steps. First, she bought up beans at harvest time, when the prices were low. She sold some at a profit right away by carrying them down to Boukankare where the prices are higher. But her new CLM home gave her a dry place to stock beans, too, and she put away as much as she could and waited for the planting season, when prices would shoot up. She also set some aside to plant in her own fields. Second, she set aside some of her profits from her first sales and rented land for cash. That way, her harvest would be entirely her own.

The strategy worked. The last harvest before she joined CLM, Ytelet had planted four mamit of borrowed beans. A mamit is a heaping coffee can, and is a standard measure of dry goods in the Haitian countryside. Her harvest was not great, but it was good, about thirty mamit. However, fifteen mamit went to the landowner and eight to the man who lent her the beans. Six months into her membership in CLM, she planted 12 mamit of beans that she purchased with cash up front on a plot she rented for 1000 gourds. She put away 40 mamit of beans at harvest, even after using some of her harvest to pay the neighbors who had helped her to work the plot.

After graduation, Ytelet continued to make progress by sticking to her plan. Her $30 grew to over $125 that she rolls over twice each year in her bean business. “At harvest, people need money and the market is full of beans, so the prices are low. I just hold on to them until the prices go up again.” With two harvests each year, she is earning well. She has even added to her livestock with new purchases.

In October 2014, she made a major decision. Unhappy with the quality of education her kids would be able to find in Zaboka, she decided to rent a room down the hill in Difayi, when she’d find much better schools. It would cost almost $100 for the school year, but it would be worth it. “I just want my kids to get a good education.”

When she looks back on her time in CLM, she smiles. “Life is easy now. I don’t worry about money anymore.” Her easy life might not look easy to everyone. She hikes the five hours from Difayi to Zaboka and back every two weeks to check on things, and she has to work her fields, keep an eye on her livestock, and take care of what are now three kids. But compared to the life she once led, it is easy. And she couldn’t be happier about her progress. 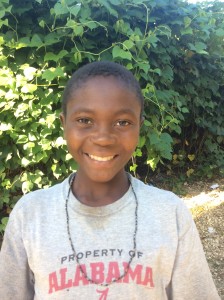