“M te mal viv,” he now says. “I lived badly.” He adds, “I spent my time just thinking about life.” Yves often was hungry. “I am blind, but I wasn’t stupid. I knew that I was missing something. I knew there were lots of things others could have that I couldn’t afford.”

Yves has been blind for years. Untreated glaucoma took away his vision when he was a boy. For a farmer in Pouli, the rural neighborhood just outside of downtown Lascahobas where he lives, it seemed like a real limitation. He would support himself as best he could by harvesting crops on his family’s land, but without the resources to invest in his farming, he barely managed.

In the spring of 2015, he joined CLMD, Fonkoze’s graduation program for extremely poor persons with disabilities. Though he was poor enough to have qualified for the standard CLM program, Fonkoze offers that program only to women who have dependent children. As a single, childless man, he couldn’t have benefited. The CLMD program, however, focuses only on poverty and disabilities, so a blind young man with no reliable source of support fit right in.

He chose goats and a pig – he likes raising livestock – and he got to work. He was careful with his cash stipend, and invested savings from it into his farming. He had never been afraid to work hard.

His livestock and his farming prospered. His two goats were soon seven goats, and with every harvest his wealth increased. He started renting additional plots of land so that he could farm even more. It keeps him busy, but he doesn’t mind the extra work. He sold five of the goats to buy a cow, and though his pig never reproduced he took care of it until he was able to sell it to buy a horse. “I wanted a mare, because after its first colt, you can start crossing it with a donkey to get mules, and they sell for a lot of money.”

But Yves hasn’t just gotten wealthier. He’s changed, even in his own eyes. He explains that when you start having visitors, it changes everything. The CMD program provided weekly visits from a case manager and less regular visits from other members of the staff. Yves had never had visitors before. “Tèt mwen te pi ba. M pat gen lavni. M gen yon bèl tèt kounye a.” That’s like saying, “I was feeling down. I had no future. Now I walk with my head held high.”

And others see him differently, too. “When you have no hope, people don’t value you. But when they can ask you for something and you have money you can lend, that shows real value.”

Even a year ago, Yves thought he would spend his life alone. Because he is blind, he thought he could never have a family. But now he thinks of the young women in his neighborhood, and he knows they think of him. “I’m not ready to make a commitment, but I will be.” 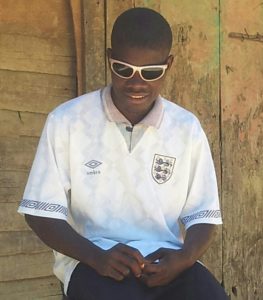