Monday morning, I spoke with Denius. He’s a boy about 19 or 20, though he looks several years younger. He’s his mother’s oldest child, one of her four surviving boys. His father, who was also father to Amisson, the next younger boy, died a few years ago. The mother, Osiane, died just as the CLM program was starting. Her death was probably related to malnutrition. The last time we saw her, she was weak and a little disoriented. And she had a scarf tied around her stomach as poor Haitian sometimes do when they are suffering hunger pangs. We just didn’t get to her soon enough.

Relatives decided to take the two younger boys, but to leave Denius and Amisson, who’s 14, to fend for themselves. They’ve been managing. Not very well, but they’re learning.

During the first few weeks we were discouraged to see how little Denius was willing or able to do for the household. CLM depends largely on members’ deciding to work hard with the advice and the assets that we offer them, but Denius seemed to be mostly sitting around.

When I started to press him, he admitted that physical exertion made him dizzy. The shock of losing his mother was combining with continued hunger to make him weak. I couldn’t do much about his sadness – the cure for that seems to a combination of time and Amisson, who is unswervingly playful – but I could help with the hunger. An American intern had just finished six months with us, and she left a large quantity of powdered protein drink (chocolate flavor) behind. We brought most of it to Denius and Amisson, and added a care package of some more conventional food that had been left over after six days of the new members’ enterprise training. Denius has been saying that he feels much better, and we see new energy in the work that he’s started to take on.

But he was a little panicked when I saw him Monday morning. Sunday night, the relatives who had taken the youngest boy, Bernardo, changed their mind. Bernardo is two, and had been getting sicker and sicker since his mother’s death. I suppose they didn’t feel as though they could take responsibility any more. So they brought him back to Denius and Amisson, along with a sack of his dirty clothes, and walked away.

Denius didn’t know what to do. It is hard enough for him to have to raise Amisson without their parents’ help. But Amisson clearly understands their situation, as much at least as he could be expected to, and he had made himself much more manageable than anyone could expect. Bernardo, especially a sick Bernardo, would be a different story. At the same time, Denius was clear: “I can’t just throw him away.” He was stuck, and he’d have to figure out a way to be father to the little boy.

When Denius and I first spoke on the phone, he was most worried about a high fever. “I put Bernardo to sleep in the middle of the bed, between Amisson and me, but every time I rubbed against him, it felt like fire against my skin.” I told him to start bathing Bernardo in cool water to see whether he could bring the temperature down while I was on my way.

By the time I arrived, the temperature was down, but Bernardo was lifeless. He was sitting in the middle of the bed – he would cry if Denius tried to make him lie down – but he could barely keep his eyes open. More striking was the terrible rash that covered his head. Blistering sores and cracked scabs were all over his scalp. Every once in a while Bernardo would make an effort to scratch the scabs, but mostly he just sat there.

So I had Denius wrap him up and get onto the back of my motorcycle, and we rushed to the PIH hospital. We had to wait for most of the morning. I asked Denius whether he had eaten anything, and he hadn’t. So I went out and got him a large plate of boiled plantain and meat sauce. The women who surrounded him, the only man in the line waiting with a child to see the pediatrician, seemed to enjoy watching him feed Bernardo as he ate.

They eventually saw a doctor, who gave them a seven-day course of liquid erythromycin and two large tubes of ointment for the rash. On the way home, we stopped by Mirebalais’s one grocery store, and bought some powdered milk and some instant oatmeal.

After I dropped them off in Trianon, I continued up the hill to Yawo, which is on the road leading west along the ridge from Fon Cheval. I wanted to see Elourdes. She’s a new CLM member whom I’ve written about before. (See: DifferentShapes.) I had visited her on Thursday and found her struggling with a painful burn on her right calf. She had taken a spill when riding on the back of a motorcycle. The muffler had landed on her leg. We had a tube of good ointment for burns in our office, so I brought it to her. Monday, I wanted to find out whether it was helping.

Her yard is generally a loud, busy place. She has nine children. One is a girl in her mid-teens with a child of her own. But Elourdes was sitting on her front porch, with four of five of the young children sitting listlessly around her. She, her husband, and I had a good talk. The ointment was apparently helping a lot, but they were more interested in the goats we had given her on Saturday. The husband wanted to know whether he was allowed to mark the goats, and we talked about the advantages of doing so.

He and Elourdes remained cheerful throughout our chat, as did their oldest boy, a youth in his late teens. The younger kids, whom I knew to be inclined to play, were distinctly cheerless.

The reason was obvious. It was late afternoon, and they had not yet had anything to eat. Elourdes has been in the program for a couple of months, but she has nothing like a steady income stream. She, her husband, and the oldest boy were able to joke about how one has to live with hunger when there is no food in the house, but the little kids were miserable. I pulled the son aside on my way back to my motorcycle, gave him some money, and asked him to go buy something they could feed his brothers and sisters. He thanked me, and I rode off.

On my way back down the hill towards Mirebalais, I stopped in Pòsab. I wanted to see Guilène, whom I wrote about in the piece that mentions Elourdes. I had particularly wanted to see her boy, Jovensonne. I had taken him to the hospital the week before, and I wanted to see whether his foot was healing.

The moment I saw him limping over to greet me, I knew he was doing well. The week before, he had been unable to walk because his foot had been pierced by a sharp tool in an accident that occurred while he was playing with his uncle, who is a small boy not much older than he is.

Jovensonne had a plate of rice in his hands, which was another good sign. He tried to get me to eat some of it, but when I wouldn’t he finished about two-thirds, then gave the rest to a hungry-looking child from a neighboring house.

He then went back to his play. He had taken a coconut leaf and stripped off the foliage, leaving only the woody, saddle-shaped stem. He had then tied a stick across the narrow end. He was sitting on the wide end, holding the cross-piece, and sliding around the yard on this improvised motorcycle, pretending to honk the horn just as he had when he sat in front of me on my motorcycle as I drove him home from the hospital the previous week. I could hardly have felt more encouraged. “He has a good body,” his mother explained. That’s a Haitian way of saying that someone tends to heal quickly.

As I think about these stories, I think about the fundamental challenge I face when I write about CLM. It is easy to talk about how worried I was about Denius and the difficulties he would face as de facto father to his two-year-old brother. It’s easy to focus on the sick feeling in my gut as I watch Elourdes’ young children, listless from hunger, and how I feel a little better when I’ve left some cash in their brother’s hands. It’s easy to talk about the fun I have playing with eight-year-old Jovensonne, who tells his widowed mother that he wants me to be his dad. But I think it’s important to remember that I am not the story, neither my frustrations nor my joys. Everything important about CLM centers on the extremely poor families we work with, the problems they overcome, and our case managers, whose creativity and devotion enable those families to transform their lives. The story of CLM is their story, and my situation as a close observer is a privilege that I hope I know how to appreciate.

A final note: Things may work out for Denius. When Bernardo’s father got word that his boy had been abandoned by the relatives who had said that they would raise him, he came and took him himself. I don’t know what his situation is financially, but he must be in a better position to raise a toddler than Denius is.

Denius is upset because the man apparently took the boy gracelessly. “He didn’t say anything nice to me about the way we took Bernardo to see a doctor and get the medicine he needs,” he complained. But he is also very relieved. He had started to worry that his hopes of returning to school this fall, after missing the last two years since his father’s death, would fall apart if he had a toddler on his hands.

Here, in any case, is a photo of Denius and Bernardo, taken during the day they spent as father and son: 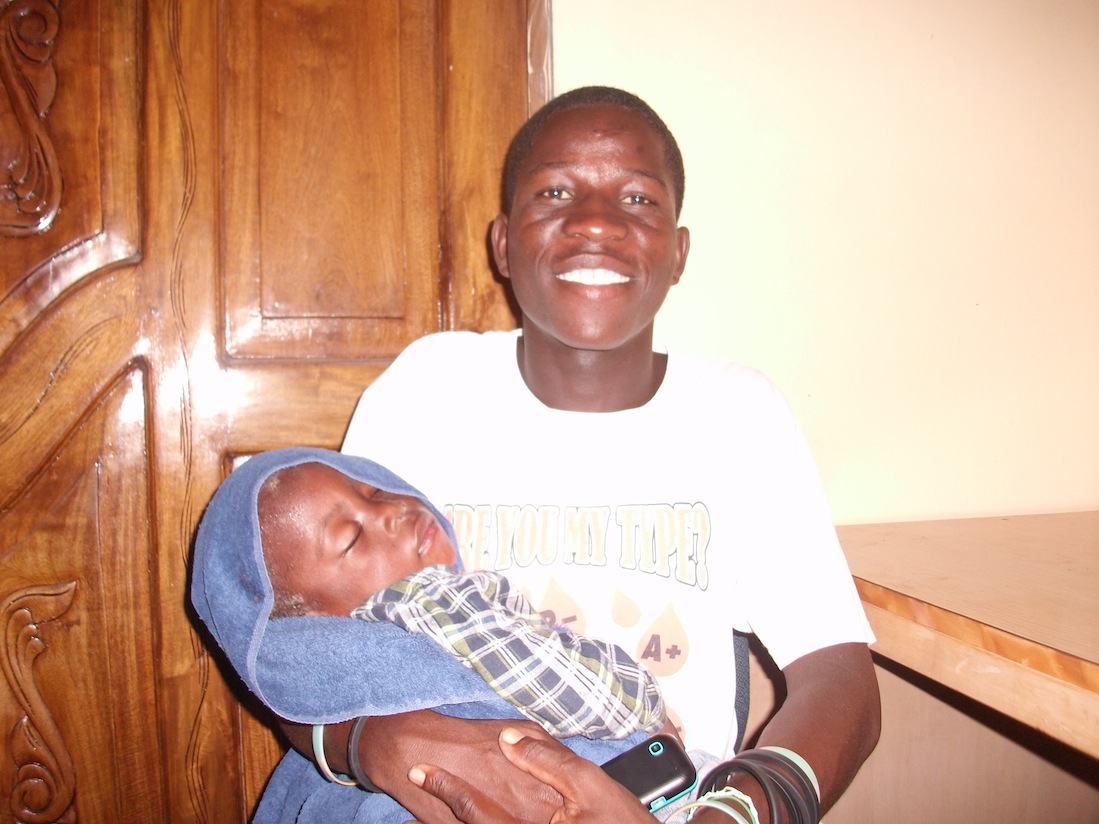