Nine months after the graduation in Bay Tourib, which is still the largest single graduation we have ever celebrated, a lot has changed in the mountains that overlook Tomonn. When I rode up for a visit in the summer, in the middle of the rainy season, the road had deteriorated badly enough that I gave up before I got to the town. For that trip, I went with my godson, Velicène. He’s a medical school student and was going to spend a week assisting the doctor there. We left my motorcycle by the side of the road in Jidipe, and hiked the last hour or so in the rain. But in the early fall, the Haitian government put heavy equipment to work in preparation for the parish festival in November, and the assorted tractors and graders did a lot of good.

For now, at least until next year’s rains wash the new, improved road out, the ride from downtown to Tomonn to Bay Tourib is easy. Motorcycle taxis go up and down the road for only 150 gourds, or less than $4. The old price was 500. And at 500 gourds, one had to get off the motorcycle to walk in a couple of places that were too difficult for even a professional driver to take with a passenger. Just as importantly, trucks without four-wheel drive can now get to the town, and one has started coming up to Bay Tourib regularly to buy the fruit that grows abundantly there and to transport it for sale to Port au Prince.

Previously, fruit would rot on the ground. People would have more than they could consume, but they would have a hard time getting it to market. That should no longer be a problem. If the truck focuses on produce, rather than charcoal, it will be an unmixed good for the region. But I had heard about the road. It was not really what I was curious about. I was much more interested in discovering how CLM graduates were doing. I had heard disturbing rumors of livestock lost to disease and to hungry dogs, so I was concerned. 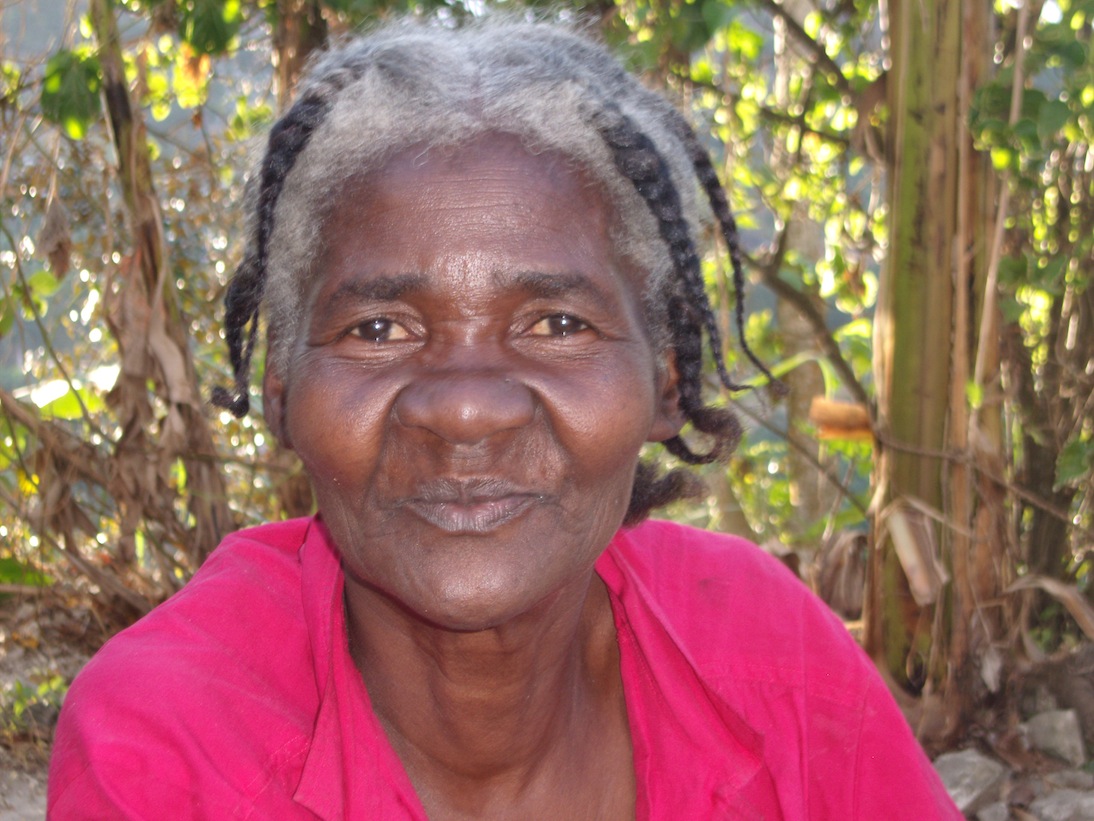 Mirana lives with her husband in Senflè, uphill from the residence at the Partners in Health hospital. I remember her very well from my first visit to her in the spring of 2011. She had just lost one of her older sons, the one who had been her principal source of support ever since Canot, her husband, had grown sick and incapable of hard work. The younger man had earned enough money to buy her a small house, had helped her keep their family fed, and had even paid to send his little sister to school – the first of Mirana’s children to see the inside of a classroom.

That son had gone of to Port au Prince, promising to find work and to earn a real income so that he’d be able to support her well, but the first news Mirana had heard of him was that he was dead. She had sold off what little she owned just to pay for his funeral.

The household was going hungry most of the time. She had planted a couple of cups of beans that had been lent to her by the local peasants association, but she, Canot, and their daughter were surviving mostly on handouts.

What was most memorable about that interview was when she expressed her greatest sadness. She said, “We get by with what we have, but I’m sorry for my girl. She’ll finish primary school this year, but there’s no way I can send her any farther.”

While Mirana was part of CLM, her case manager helped her figure out how to send her daughter to school in Tomonn. The young woman would live with a relative. Mirana would send food and money down as often as she could. That way, the girl would seem less like a beggar, and more like a regular part of the household.

And the first person I saw in the yard when I passed by on Christmas day was that girl. She’s still in school, but had come home for vacation. Mirana has not continued to accumulate much in the way of assets, but she has been able to keep herself, her husband, and their daughter decently fed, and the girl in school. The girl will take the national 9th grade examination this coming summer.

I asked Mirana about the rumor that some CLM graduates had been losing goats to packs of hungry dogs. She answered that she had lost one herself. But she still has one mature female. It’s now pregnant, and its most recent kid is a female on the verge of sexual maturity. So she should soon have a couple more. Both were tied in her yard, right in front of the house. She now brings food to them there instead of tying them where they can find food. It’s the best way she has to protect them from the dogs.

She had also been raising a pig, but had become concerned when several of her neighbors’ pigs had died. So she sold hers. Bay Tourib’s farmers were harvesting their beans just then, so she invested the money she earned from sale of the pig in dried beans. She’s holding on to them. By waiting until planting season to sell them, she will be able to turn them over at a significant profit. “I’ll be able to buy a pig again with money from the beans.” 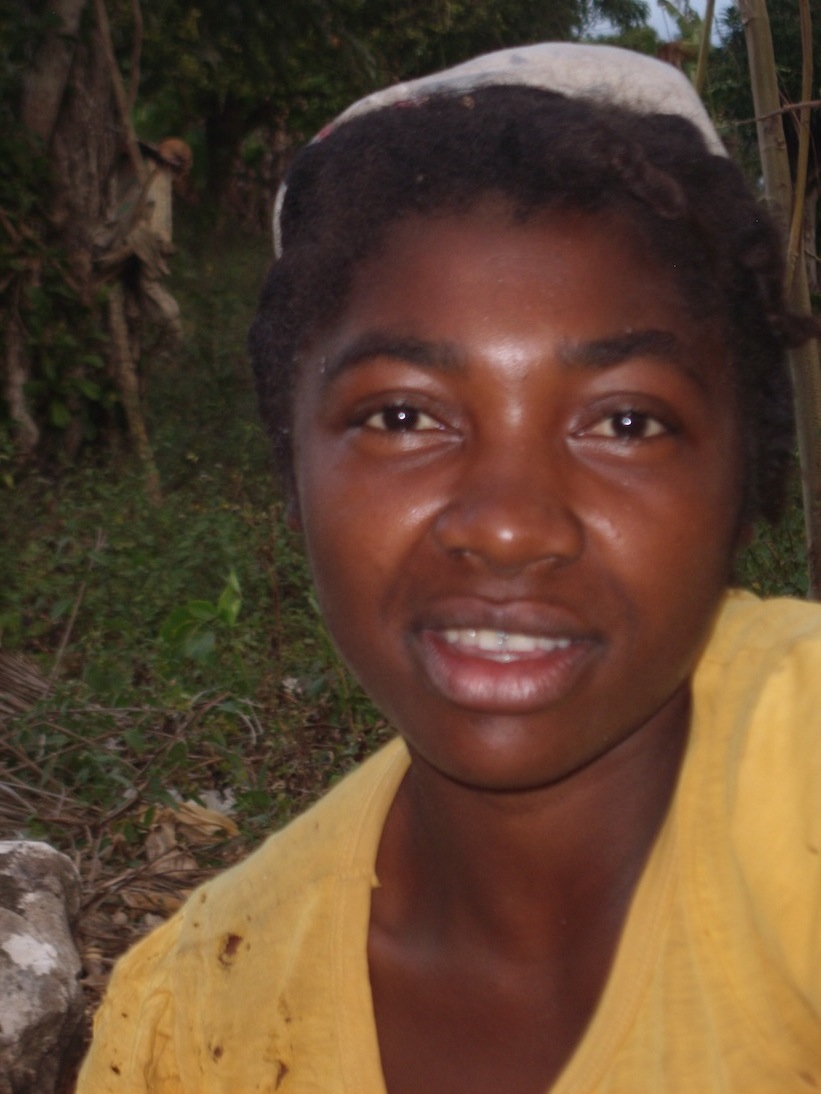 Mirana’s older daughter, Orana, lives in Fonpyèjak, with her husband Bob and five small children. Bob works hard as a farmer, and is able to keep the family fed while Orana earns cash with a business selling plastic sandals at the markets in Abriko, Regalis, and Koray.

Before CLM, they struggled in three ways. First, Orana had to carry her merchandise on her head because she had no pack animal. That severely limited her ability to earn. She was further limited by frequent pregnancies. On the other, Bob was unable to farm consistently because he had to leave home to look for work every time they faced a significant expense.

CLM helped them build up assets until they were able to buy a mule. That made it possible for their business to grow. They worked together so well that even when most of their capital was stolen during a purchasing trip to Port au Prince, they were able to get themselves going once again by selling off some of their produce.

Orana and Bob have not added new livestock since Orana graduated, but they added something important to their yard, something that reflects their growing prosperity.

A kolonbi is a grain depot built on long stilts to protect the harvest from rats. As I walked up to the front of Orana’s new home, the one she built while a member of CLM, I noticed that the straw house they had been living in before joining the program had been demolished. When I had been talking with Orana for a few minutes, she asked me proudly whether I had seen her new //kolonbi//. I hadn’t noticed it. It was hidden behind the new house. They used the lumber from the straw house, but then bought used tin roofing material to cover it. Orana was excited about it. Because Bob no longer had to take time off to earn cash, they had enough of a harvest to require storage. And her nice, new kolonbi provided a good space to store it in.

The family seems to be doing really well. The children are healthy and in school, and Orana uses family-planning services offered by Partners in Health. And Orana reports that her business is steady. 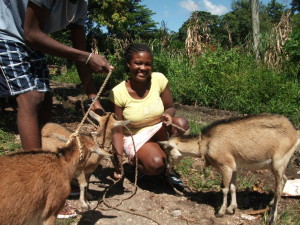 When Gladys heard I was in Bay Tourib, she came to the residence to see me. She was anxious to tell me how well she was doing.

I knew she had been involved in small commerce when she graduated from the program, so I was concerned to hear that she had wasn’t selling anymore. Then she explained why: Her horse had died. She can’t carry merchandise to market. It’s too far. When I asked her whether she had had problems feeding her two girls because she had let her business disappear, she explained that the harvest had been very good, so that they were doing well.

Like other graduates, she had been concerned when people started to lose goats to hungry dogs, but she had protected herself. She had sold off her remaining goats, and bought a pig instead. The pig had had six piglets, which were starting to grow. She was planning to let them grow until she could sell them and buy a mule. Then she would go back into business.

It was, generally, an encouraging visit. It is always exciting to see CLM graduates who have accumulated significant assets by the end of the program. But talking with women like Mirana, Orana, and Gladys is more encouraging still. Their wealth has ebbed and flowed since they joined CLM, but they have shown resilience because they have learned how to develop and work from a clear plan. They are still very poor. There is no mistaking that. But they are making progress, not as passengers riding a tide, but as actors charting a new course for the families they lead.