Guilène’s husband used to work loading and unloading a truck that carried imports from Elias Piña, in the Dominican Republic, into Port au Prince. The truck’s brakes gave out as it was going down a dangerous mountain road to avoid the customs station on the main road into the capital. He never made it to a hospital.

After he died, Guilène moved back to Pòsab, a small community near the market in Labasti, right on the main road that leads from Port au Prince to Mirebalais. She had neither land nor livestock of her own, and she lacked both the capital and the know-how to start a small commerce. Her husband had been the provider in their home. She had only had to manage the money he brought to her. So she moved into a shack on her stepfather’s land with Jovensonne, her son, and Guinya, a daughter who was born just after the husband died.

Guilène kept them fed at first by selling off the household goods she had accumulated as a married woman: her bed, her curtains, her sheets, her dishes, pots, and pans. When she had nothing to sell, they went hungry.

As her relationship with her mother deteriorated, life just became harder. She got on well enough with her stepfather, but the two women would argue and fight. Chimène, her mother, had problems enough of her own. She had numerous younger children she struggled to feed. They fought over everything and over nothing. Chimène wanted Guilène to respect her authority. Guilène resented the way her mother took advantage of her need to sell off her things. She had expected help. Instead she felt her mother cared about nothing but getting a good deal.

Since they were two separate households, we qualified both for CLM. And each got quickly to work.

When Fonkoze adapted BRAC’s Targeting the Ultra Poor, or TUP, program for Haiti, we were reluctant to change very much. BRAC had shown that the program could be successful in Bangladesh. We became convinced by the approach, and sought mainly to replicate it. But there were some things that had to be changed. Haiti’s mountainous terrain and the way its population is distributed each required minor adjustments in the way the program is administered.

But one standard part of Haitian culture integrated itself seamlessly into the work as TUP turned into CLM. It is what Haitians call a sòl. It’s an important financial strategy for many classes of Haitians, and it quickly became a central part of CLM.

A sòl is a savings club. A number of people get together and contribute a set amount every day, every week, or every month. Each time they contribute, one of the members collects the whole pot. If there are ten members, and they each contribute 100 gourds a week, one of the ten will get 900 gourds each week. It’s a way that Haitians, who can be under a lot of pressure to spend what they earn every, force themselves into a discipline that permits them organize a lump sum.

We quickly discovered, however, that our members wanted to do much more with their tchotcho than feed their kids. They would make small deposits in the savings accounts we would open for them, or they would buy small assets, like chickens.

And they also wanted to organize a sòl. Most would put aside 100 of their 300 gourds. They would collect their share more or less often, depending on the number of women who were in the sòl with them.

Our case managers quickly discovered how useful a part of the CLM process a sòl could be. One of the most important challenges that a case manager faces is to teach CLM members to plan. Most members have spent their lives struggling to find food each day. They haven’t had the leisure to think about the future.

But each time a CLM member is scheduled to received the money from her sòl, she and her case manager take some extra time to plan what she will do with the money. She might use it to pay school fees or to start a small commerce or to buy livestock or to invest in farming.

When it was Guilène’s turn, she used it to address her biggest problem. She added its 1500 gourds to 500 she had left from the sale of her bed and put the 2000 gourds down as a first payment on a five-year lease on a small plot of land. The total price was 5000 gourds, but the landowner likes Guilène, and was willing to take a partial payment. She quickly built an ajoupa, a tent-like structure that has a peaked roof that comes all the way to the ground. Its only walls are small triangles in the front and back. An ajoupa is generally made of sticks and straw, but Guilène was able to cover hers with the old roofing tin that she brought with her from her house in Belladère. That got her out of her mother’s yard, and made it possible for her to start to feel better about her life.

Her first major problem struck as she was having a neighbor dig the hole where she would place her latrine. The hole made an attractive place to play for Jovensonne and his uncle, Chimène’s second-to-youngest son Lukachòn, who’s just a couple of years older than he is. One day, when Jovensenne was in the hole, Lukachòn let a heavy iron pick they were playing with fall in. It landed on Jovensonne’s foot, and cut all the way through.

One measure of the hostility Guilène felt towards Chimène is that she accused her of indifference to the damage Lukachòn had inflicted on her boy. She was so angry that Chimène sent Lukachòn to Port au Prince to stay with another one of her older daughters. She was afraid of what Guilène might do to him.

This happened on a Friday morning. Guilène’s case manager, Nerlande, wouldn’t be in the neighborhood until Monday. Guilène had no money to get Jovensonne to the hospital. Though the care would be free thanks to Partners in Health, there would be transportation to pay for and food to buy if they had to stay a long time. She could have called Nerlande, but she had just joined the program, and was not yet used to thinking of her case manager as her most important partner in the struggle to improve her life. So she carried Jovensonne to a neighbor, who stanched the wound with cotton and poured in some alcohol.

By Monday, when Nerlande and I went by, the wound was badly infected. Jovensonne was stuck in bed with a high fever and a foot swollen to twice its normal size. I put him on the front of my motorcycle and rushed him to the hospital. He went through agony as nurses carefully removed each thread of cotton from the ugly wound. An x-ray showed that the pick had passed through his foot without breaking any bones. In that sense, he was lucky. The doctor who saw him gave him a course of children’s Tylenol and amoxicillin, and he was starting to heal within days.

The experience would have shaken any mother, but it was especially hard for Guilène because of her special relationship with Jovensonne. Since she became a widow, Guilène has gotten used to referring to him, though he’s not yet ten years old, as the man in her house. She is always raving about how loving and helpful he is. Not only does he refuse to complain when she can’t feed him the way she’d like to, but he begs her not to borrow money or buy food on credit because he doesn’t like to hear people speak roughly to her when she cannot pay. Haitian children are generally raised to share, but Jovensonne is especially good about doing so. Nothing falls into his hands without his mother and his little sister get something first.

A couple of weeks ago, we were glad to see that Guilène had started a small commerce. It is an important step towards assuring daily income. When she joined CLM, she had asked us to give her goats and a pig. Each member chooses two activities she would like us to help her start. Guilène takes good care of her animals, and they should eventually earn her significant profits. But they could not help her feed her children in the short term. She needed a way to earn at least a few gourds every day, and small commerce seemed the most likely way for her to do so. We wondered where Guilène had gotten the money to start her commerce because we knew that the down payment she made on her lease had more-or-less cleaned her out.

Guilène told us that after she pays 100 gourds into her sòl each week, she takes 25 of the remaining 200 gourds and gives them to Jovensonne. To an American accustomed to a culture in which even young children get an allowance, this might seem like an obvious thing to do. But of the 2400 who have graduated from CLM thus far, and the 1350 currently in the program, Guilène is the only one we know of who has done something like this.

Jovensonne spends 15 gourds on whatever treats happen to catch his eyes – always sharing with his mother, his sister, and his friends – but he puts ten gourds into his own weekly savings club. He had seen how a sòl had helped his mother, so he wanted to be part of one too. Each week, he and his friends all contribute their ten gourds, and one of them gets the whole pot, which is 400 gourds.

When it was Jovensonne’s turn to receive the pot, he gave it all to his mother and told her she could start a small commerce. She got off to a successful start based only on the money her boy gave her, selling cookies, crackers, and hard candy from a basket at the side of the main road. Eventually she was able to add her own cash when her second turn came around. That allowed her diversify the range of products she can sell. She added peanut butter sandwiches and coffee that she roasts and grinds herself. She also occasionally fries dough or sweet potatoes. 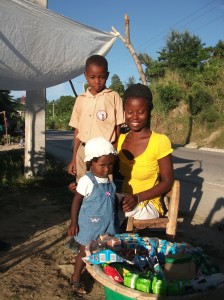 So Jovensonne started his mother in business, and proved that, at nine years old, he is a real partner in her struggle to lift her family out of poverty.

One final note: The accompaniment CLM offers is not focused narrowly on members’ economic/financial development. We are committed to help them improve all aspects of their lives. Nerlande believed that a better life for Guilène and her children would depend, in the long term, to healing the wound separating her from her mother. So she invested a lot of extra time over the first few months talking to both women about their conflict.

And we are glad to report that her encouragement has yielded results. Guilène decided to go to her mother and make up. “We can’t both be members of this great program and not be friends,” she explained. So they are friends once more. When Guilène has to leave her business for a few minutes, her mother sends Lukachòn or his little brother Dinaldo to cover for her together with Jovensonne.