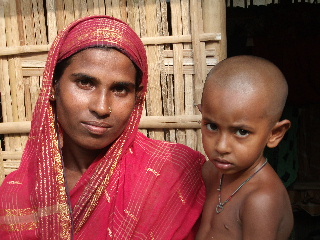 Nomichha used to work as a servant in her neighbors’ households. They wouldn’t really pay her, but they would give her some food, and between that and the few taka her husband could earn working other people’s land, they would do the best that they could for themselves and their child.

Then BRAC came into their lives.

BRAC is the world’s largest NGO, a comprehensive development agency that was formed in Bangladesh in the wake of independence in the early ‘70s. It now employs over 100,000 people in countries across south Asia and Africa in its broad array of anti-poverty programs. Fonkoze sent three Haitians and me to Bangladesh for a month to study one of those programs – it’s called “Targeting the Ultra Poor” (TUP) – because it is the model for CLM, Fonkoze’s approach to addressing extreme poverty. BRAC will be providing extensive technical assistance as Fonkoze scales-up its program to reach many more families. BRAC is especially known for its capacity to do things not only well, but on a large scale.

BRAC’s TUP team came to Nomichha’s village just over a month ago. They held an open meeting, inviting the local population to help them identify the ultra poor households among them. After verifying what they learned at that meeting, they sent a caseworker to each of the selected households to describe the program to the prospective participant. She would receive training in running an income-generating activity and then be given the assets she would need to get the business started. She would get a daily stipend to buy food for several months. That would enable her to give up working in other households so she could devote herself to her new business. She would also gain free access to essential healthcare services. Most importantly, she would receive weekly visits from her caseworker, who would provide extensive additional training for two years as she built up her new livelihood.

When she heard that BRAC was willing to give her two cows, she was a little afraid. At first she decided not to take them. She had heard rumors that BRAC would force her to convert to Christianity. But her neighbors and family spoke to her, and they convinced her that the rumors weren’t true. So she took the cows, and has been caring for them for a month.

BRAC offers the women served by TUP a wide range of assets to choose from: various sorts of livestock, small plots of land to farm, merchandise to create a small business. But Nomichha can’t really tell you why she chose cows. She’s still very shy. Her neighbors answer most questions for her.

She’ll have a lot to do to graduate in two years: build up her business and her confidence as well. But BRAC gives her a proven road to travel, and dedicated and experienced staff to lead her on her way. 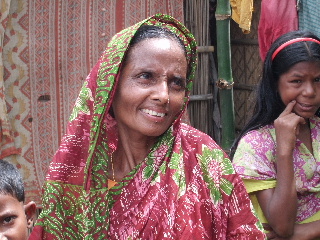 The difference between Nomichha and Mazeda is dramatic. Mazeda is a graduate of the TUP program, having joined it in 2006. She tells a similar story of her life before TUP. She was a domestic servant, doing odd jobs for food in her wealthier neighbors’ homes. “I had a miserable life,” she says, “full of problems.”

BRAC gave her one cow and two goats, and she quickly got her dairy business up and running. She now has two cows and a calf, and is selling two cases of milk per day. She eventually sold the goats because she wanted to invest the money in a rice business instead. “I had learned how to process rice from a neighbor, but I never had the money I needed to start a business myself.” She buys raw rice from farmers and then processes it to be sold in the market. She built her own house with 12,000 takas (about $170) that she earned from her businesses, and leased farmland for 20,000 takas so she can grow some rice herself. She has 3000 takas in savings as well.

BRAC’s program is designed not just to provide extremely poor people with some income, but to fundamentally change their lives, and Mazeda is a great example. “I’m a different person in my village now. People respect me. They come to me for advice, even for small loans.”

We explained to Mazeda why we had come to Bangladesh, and asked her whether she had advice for the Haitian women we would be serving. She asked us to tell them three things, “You need to work hard, listen to the advice your caseworker gives you, and take good care of your assets. Mainly, though, it’s hard work.”

Meeting her, and other TUP graduates, is enormously helpful as we look to make our program in Haiti expand. We don’t have a lot of graduates in Haiti just yet. The pilot of our program served only 150 families. Seeing so many graduates, and hearing their stories, gives you a sense of the scale our program is capable of. It is possible to eliminate extreme poverty for more than a lucky few. One village after another, BRAC is eliminating it from Bangladesh entirely. Though we are not ready to bring the program to such a scale in Haiti, seeing it before one’s eyes gives good reason to hope.