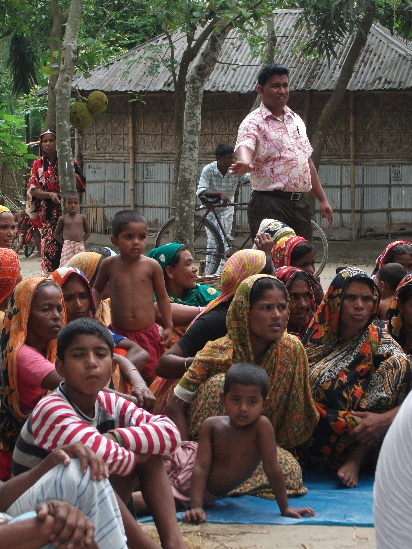 The BRAC program for the ultra poor begins, just as Fonkoze’s version does, with a careful selection of the women who will be invited to participate. The program is both resource and labor intensive, so you want to make sure that the people you’re serving really need it.

The selection procedure that’s used is called “participatory wealth ranking” (PWR). Just as its name suggests, PWR invites the residents of a community to collectively provide the initial information that will guide eventual selection. PWR involves three staff members: an organizer, a facilitator, and a recorder. And it unfolds in three steps: an initial visit, mapping, and wealth ranking.

The first member of the PWR team, the organizer, undertakes the initial visit. She goes to a village that the BRAC ultra poor team has identified as needing ultra poor services, and she does two things there. She walks around, meeting the community’s members, especially its leaders, and gaining a sense of the number and types of households the village contains. And she invites residents to a meeting to be held the next day. She doesn’t say much about the purpose of the meeting, but just asks them to come because BRAC needs to collect information about the community for a program it hopes to offer.

The next day, all three BRAC staff members come to the village. They will lead the village’s residents through a two-step process. The first step is to trace a map of the community on the ground. They ask for a volunteer from among the participants to help them with this, but work hard to make sure that as many participants as possible are contributing their opinions. This can involve a lot of discussion as to just where to put the roads, and it can take several attempts to get it right. One of the reasons for tracing the map on the ground, rather than directly onto paper, is to make erasure and correction as easy as possible. 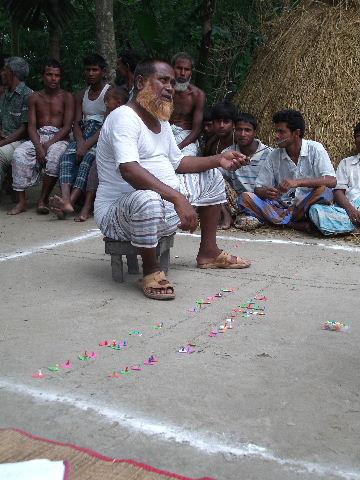 After tracing the roads, the volunteer adds symbols to mark important landmarks – schools, Muslim mosques, Hindu temples, government offices – then places small numbered cards everywhere that there is a household.

As each small card is placed, the PWR team is collecting information. They ask the name of the principal member of the household, his or her father’s name, and his or her occupation. This information is gathered by the second member of the PWR team, the facilitator, and written down by the recorder both in a notebook and on larger cards, with each household getting its own card. The notebook will be the official record of the day’s activity, but the cards will be the tools that permit the team to move the group to the next step in the process. 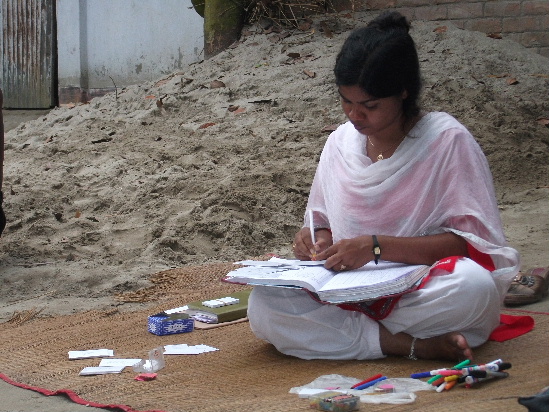 That next step is the actual ranking process, where the team learns the relative economic status of every household in the community. The facilitator will begin by choosing three of the cards and asking participants whether the three households are equally well off. If they are, the facilitator will have to choose another couple of cards and ask the same question. If they are not, the facilitator will ask a volunteer from the community to put them into separate piles. The group will then go through the whole stack of cards, one after another, deciding which pile to put each of them into. In the course of this work, they are likely to come across households that do not exactly fit into any of the piles. For example, they might come across a family much wealthier than any of the initial three. In such cases, they will simply add a new category, or pile. By the activity’s end, they might have five or six or even seven separate piles, each of which represents a distinct level of wealth.

If, at the end of the activity, the facilitator feels that there are too many cards in any one of the piles, he will go through that pile again, asking participants to split the households it contains into two groups. What is most important, at least for the program for the ultra poor, is that all the poorest households in the village end up in one of the bottom two piles, because it is those two piles that BRAC field staff will concentrate on for initial and final verification.

While almost everyone is ranking the households, the team asks another volunteer to copy the map that they have drawn onto paper, so it can form part of the meeting’s permanent record. The map will be filed in the office, and can help BRAC staff, especially supervisory staff, to find members’ households.

The information that’s gained through PWR is not 100% reliable. Program staff will have to follow up with two sets of home visits to gather and verify the detailed information necessary for selecting program participants well. But the PWR is a valuable step in the process nonetheless.

Second, it helps protect the program from the jealousies it inevitably engenders. A certain few households in the community are being selected to receive substantial support. Having defined people’s level of wealth at a public meeting can make it easier to explain why some people receive support and others don’t.

Finally, it usefully raises the presence of extreme poverty as an issue before the community’s eyes. BRAC will not be able to provide all the support and protection that the ultra poor will need to lift themselves out of poverty. The women who are finally chosen will need their neighbors’ encouragement and support as well. Eventually, BRAC will help the community organize a poverty reduction committee, whose mission will be to provide the extra support and advice that program participants need. In including everyone in the selection process is one way of reminding them that there are terribly poor people in their midst.