Since Fonkoze established its CLM program over ten years ago, the team has been thinking about businesses it can transfer to program members. We help all members establish two businesses when they first join the program, and many eventually establish more than that. But the number of different businesses that we’ve learned how to offer over the years is pretty limited.

We started with just three: goat-raising, poultry-raising, and small trading. We added pig-raising when we noticed that the first asset many of our members purchased as soon as they had means to invest was a pig. We’ve watched raising pigs separate itself into two distinct businesses. Some members choose to raise a sow for the young she provides, and others raise a boar to fatten him up for sale to a butcher. For a while we experimented with giving members a horse to go with their small commerce, but we gave it up because we realized that a horse didn’t really count as a second business. We always want members to start with two, because there’s so much that can go wrong when you are extremely poor.

For the past two years, we’ve been trying to add some form of agriculture. Most of our members farm in one way or another anyway. They grow corn or, until recently, millet to feed themselves and their family. They’ll have a few plantain trees in their yard, and any who have access to land and can muster the resources are certain to plant beans, either pigeon peas or other more valuable varieties.

But for us to introduce a form of farming as part of the packages of productive assets we hand out when families first join our program, it needs to be reliably profitable. Farming beans, the main cash crop for at least the poorer farmers in the Central Plateau is not. Too little rain or too much, or rain that falls at the wrong moment, can destroy a harvest. And the crop cannot take too long to produce. We cannot consider plantains as part of an asset package because they take a full year before they yield anything.

So, we’ve been looking at peanut farming and hot pepper farming. The former isn’t working very well. It really depends on someone having access to more high-quality farmland than CLM members would normally have.

But farming hot peppers is showing some promise. It’s not for everyone. You have to have some land, though not a lot. And it can’t be just any land. Too wet or too sandy won’t do. But hot peppers grow well in many of the places that we work and they sell reliably across the Central Plateau.

Antonia Pierre is a mother of four who lives in Janjak, in Thomonde. She will graduate from the CLM program on August 1st. When she started, we gave her two goats and a pig, and she and her husband have done well with them. They have six goats now, and two of them are pregnant. They sold their first pig – a sow that never had piglets – for 4,750 gourds, or about $80. They used 4,500 to buy a boar, thinking it would grow faster, and it has. At this point it’s worth more than 10,000 gourds, and it’s still growing.

But as part of our experiment with hot peppers, we offered a pepper garden as a third asset to women in Antonia’s area who were interested, and Antonia was quick to sign up. “My husband has worked on pepper farms in the Dominican Republic, so he knew how much a pepper crop could be worth.” She was nursing when the CLM team organized the initial training for those who chose to participate, so her husband went in her place. After the training, the CLM team distributed a drip irrigation system to each participant. During the training, it had established nurseries where hot pepper plants were prepared. Antonia and her husband planted about 150 plants on 75 square meters of land in front of their home.

As the garden started to develop, Antonia was still pretty limited as to what she could do. But her husband was committed to the project. “He would wake up in the middle of the night to fill our barrel with water.” Once the barrel was full, it could keep the peppers watered for as many as three days. He worked hard to fight back the weeds, and stay on top of pests, too.

The couple almost took a step backward went he decided to go to the Dominican Republic for a few months. They had ceased receiving their weekly cash stipend from CLM. The program provides the stipend for just six months. And none of their business activities had started to bring anything in. He figured he could earn some quick money and return quickly. He didn’t see what alternative he had. But with an infant in her hands, Antonia had neither the time nor the energy to give their peppers all the attention that he could. She was less regular with watering, and the plants suffered. “The leaves started to dry out. They turned brown.”

But he came back after a couple of months, and it was just in time for the couple to begin their harvest. The pepper plants had suffered some in his absence, but there was no serious damage.

When sales began, the CLM team was in for a surprise. We had assumed that we could help Antonia and the other members who joined the hot pepper experiment by linking them to buyers who would sell large quantities of peppers to the growing hot-sauce industry. Small Haitian factories were producing high-quality hot sauce, and we thought that they would provide the best, most reliable markets for these small farmers. We had initially established the pilot as a part of a larger effort to support the development of “value chains,” linkages between farmers, salespersons, and end users, which could be part of developing strong economies in rural Haiti and markets for CLM members’ produce that would be more reliable long-term.

It didn’t work out that way, because there was something we didn’t know about the use of hot peppers in rural Haiti. The manufacturers want ripe peppers. These, they feel, give them the best, most consistent flavor. Rural Haitians, however, eat and cook with hot peppers when they are just half-ripe. It’s what they are used to. And harvesting the peppers before they are completely ripe has advantages for the farmer. It allows for a bigger harvest spread out over a longer season.

It also presents a generally different business model. Large farmers will pass through their fields every two weeks and clean them out of thoroughly ripe peppers. They can sell these by the sack to sauce factories. They make money in lump sums every two weeks. But when Antonia focuses on semi-ripe peppers, she can harvest every few days. She’ll take a small bucket to a market, and sell them by the cup. Rather than relatively few lump sums, her more frequent sales give her the kind of steady income that allows her and her husband to manage their household. She calculates that she has already made more than 15,000 gourds, or about $250, this year, a cup of peppers at a time. She can’t compete with the large producers, but they cannot compete with her, either. They don’t have the time or the inclination to make their living out of lots of small, retail sales.

None of this means that pepper farming has proven to be a guaranteed success. Antonia’s sister-in-law, Dieubenit, has achieved little through her efforts. 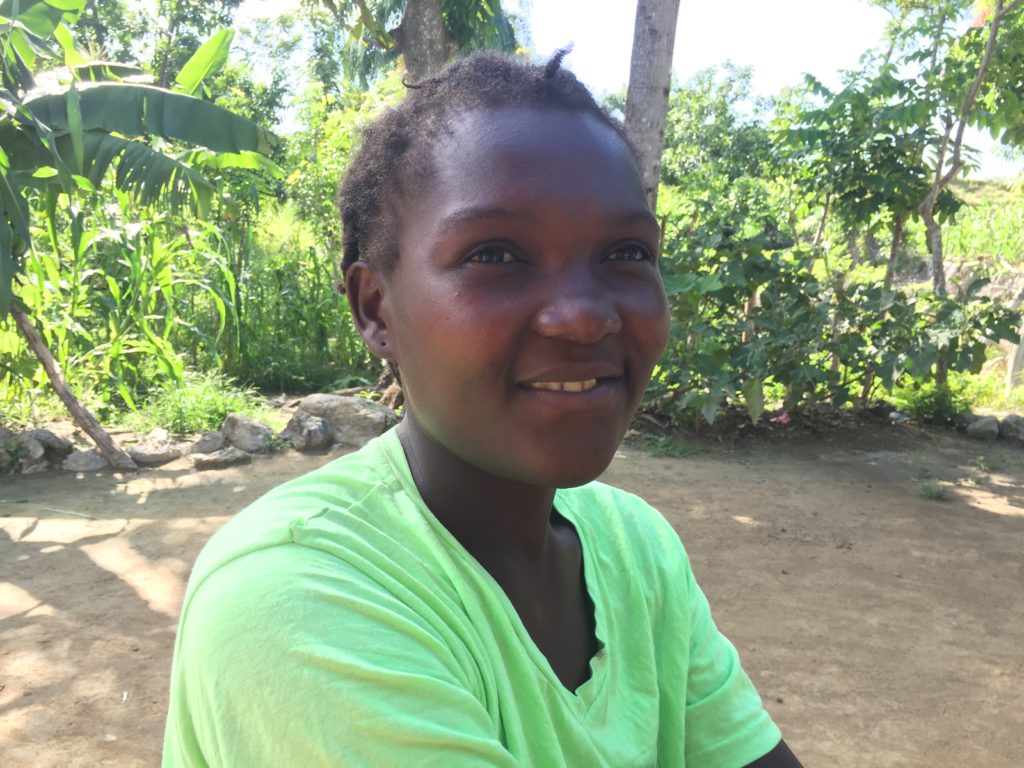 It’s not that she’s been an unsuccessful member of the CLM program. On the contrary, she has been, largely, strikingly successful. The two goats we gave her are now seven, even though she sold one of the larger ones to buy a donkey. The donkey has been important because she established a strong business buying and selling charcoal using savings from her weekly stipend, and until she bought the donkey she was limited to what she could carry on her head. She has about 2000 gourds in the business that she uses to buy merchandise every week. Profits from the sales send her children to school and they enable her to invest in her fields and to hire labor to help her and her husband farm. Quite an accomplishment for a couple that used to get by on the 50 gourds per day – less than $1 – that her husband could get working for their neighbors. We also gave her a pig, which she fattened up and sold for 7500 gourds. That money gave her half of what she needed to purchase a small plot of land that she and her husband built their new house on.

The reasoning behind the purchase of land explains the failure of her pepper crop. Until they bought their own land, the couple lived in a shack on a piece of land owned by a wealthier neighbor. He let them put up the shack to live in because he didn’t need the space himself and felt sorry for Dieubenit and her husband. They planted their peppers on his land as well. He didn’t mind. He wished them the best. But he had family members in the area, and they were either lazy or malicious with their livestock. They let them graze on Dieubenit’s pepper crop more than once. “It wasn’t my land, so I didn’t think I could say anything.” When the landowner found out, he was angry, but it was too late. “Now that I have my own land, that can never happen again. I won’t let it.” Dieubenit plans to try peppers again.