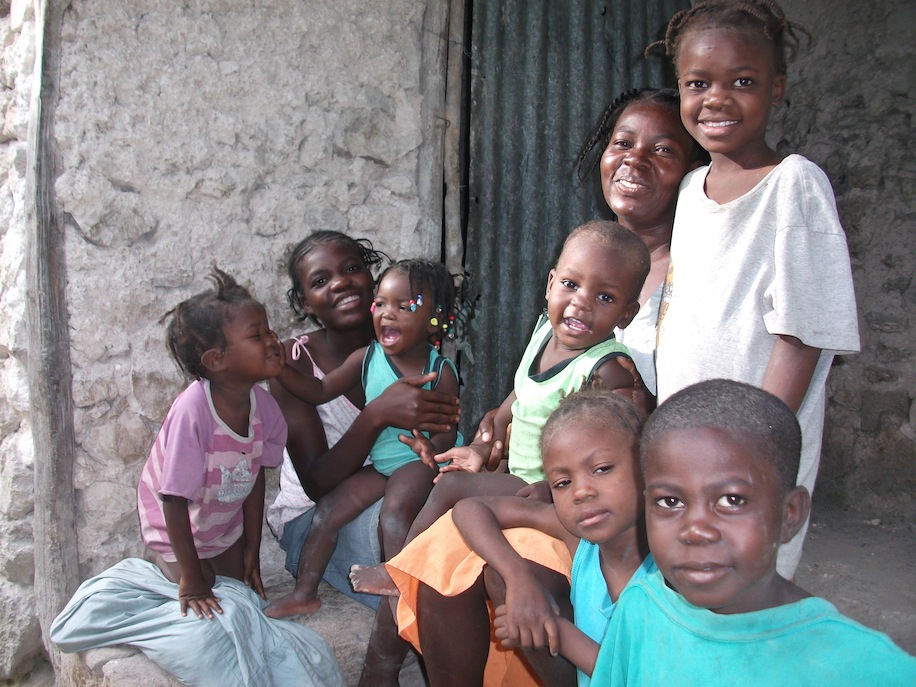 Elourdes Joseph lives with her husband, nine children, and a granddaughter in a small house in Yawo, in the mountains the separate the Central Plateau from the plain that envelops Port au Prince.

No one has to tell her how difficult life is when you have that many children. She’s tried family planning, but she never felt comfortable with it. “It made me short of breath. I couldn’t walk up even the little hill next to my house. And it gave me back pain, too.” So she had one child after another, and could only shake her head when her oldest daughter, who is still a teenager, became pregnant and added another child to the household right as Elourdes was pregnant with her youngest son.

She and her husband have always struggled, and by enterprising management of minimal resources they have managed to stay afloat even as their family has grown. Nowhere is their enterprise clearer than in the story of their home.

For the first few years after her marriage, Elourdes lived with her husband in a series of make-shift arrangements: first in the homes of various friends and relatives, then in a tent on her father-in-law’s land. But very early on, her husband bought a tree for 20 gourds. Just a few years of growth and inflation enabled her to sell the tree for charcoal for 900 gourds. They needed 600 of those gourds for household expenses, but Elourdes invested the rest. “I didn’t want all the profit to melt away.”

So she bought a very small pig for 300 gourds, and cared for it until she could sell it for 2500. Then she sold it, and bought roofing material. By then, a local organization was cutting a new road in her neighborhood with a NGO-funded cash-for-work program. Her husband was able to earn enough money to cover the other expenses that building required.

But all that enterprise is not enough to support a family of twelve. Her husband suffers chronic back pain, so he can’t work very much, and they have little land and no livestock to build a livelihood with.

Like many new members, Elourdes is optimistic about the program but a little unclear. She says she wants to “move forward,” with the program’s help, but she not yet sure what that might mean. 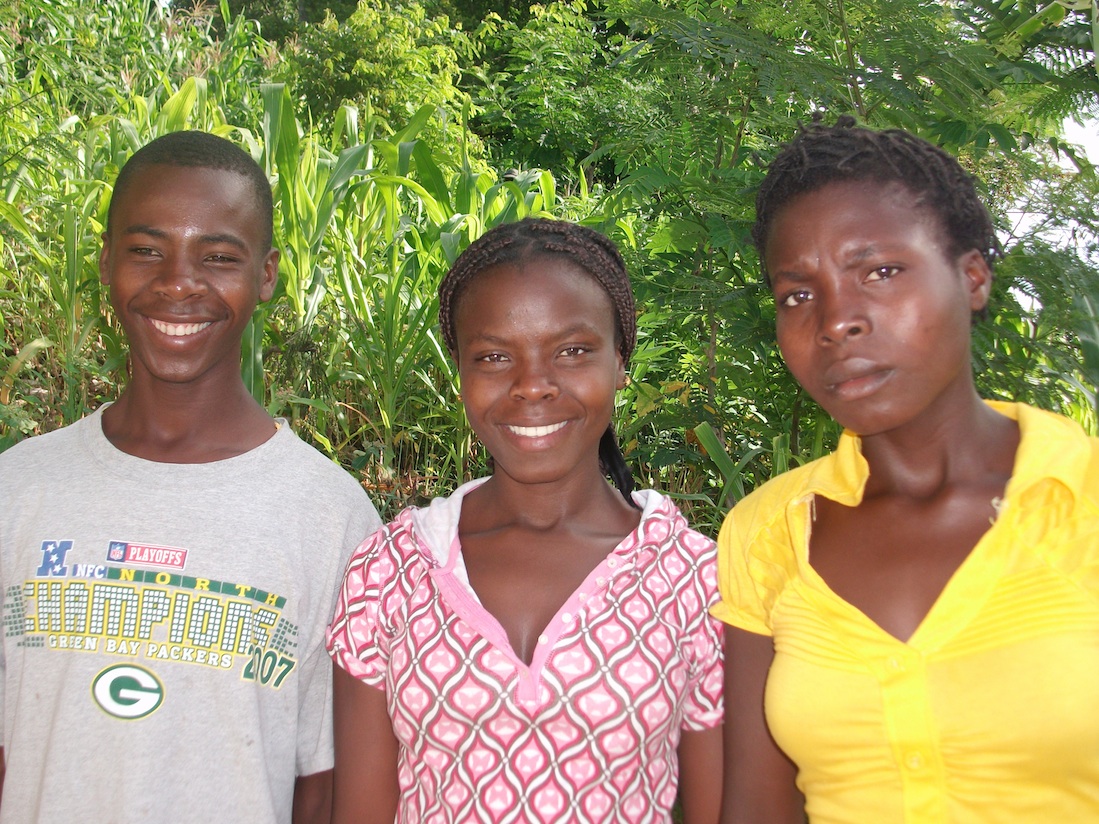 One of the criteria for a family’s membership is that it includes a woman who is capable of working and who has at least one child dependent on her. Generally, that means a mother and her children or her child. Sometimes, we come across grandmothers raising their children’s children, or godmothers who have responsibility for a godchild. But in almost all cases, we are dealing with mothers, even if the children on their hands are not their own.

AFH’s cohort of CLM families has three exceptions, however. They are groups of siblings whose parents have passed away. Julienne Dorcé and her younger brother and sister live in Yawo, in a house that belongs to a childless aunt. The aunt moved out when she realized that her sister’s children need the house more than she does.

Julienne’s mother died about a year ago. The father had died long before that. The mother left the seven children, including an infant she had had with another man. That infant died shortly after their mother did, leaving just six. After the baby’s death, relatives took the three younger survivors, having decided that the older children would have a hard enough time taking care of themselves. So the three oldest now live together.

The two younger, Sorel and Maudeline, grew up in Port au Prince, with another aunt, because their mother could not feed them. One hears all sorts of horror stories about the many, many children in Haiti who are focred to grow up outside their parents’ homes. They are often little more than unpaid servants, subject to every form of abuse. But Sorel and Maudeline were lucky. Their aunt took good care of them, sending them to school when their mother could not do that much for the children who remained with her.

They had to return to Yawo and their mother after the earthquake of 2010 destroyed their aunt’s home in Port au Prince. The aunt came shortly afterwards with her children. But by then, both women were sick, and both eventually passed away. Sorel and Maudeline joined Julienne and their siblings in a house that belongs to one of the dead women’s sisters, and the aunt’s children, who are still quite young, moved in next door with another aunt, who is a single mother, and her kids. She joined the CLM program together with Julienne. 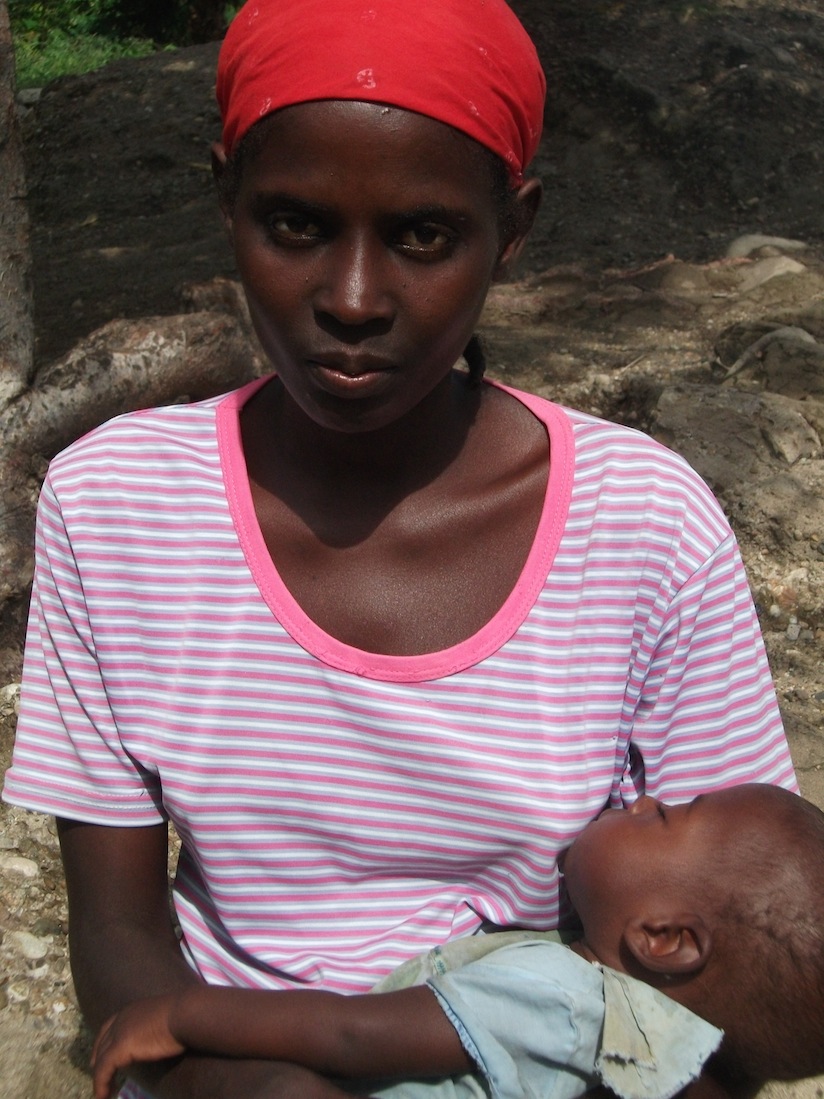 Saintanette Denval lives in Demare, a hilly agricultural area behind the important market in Labasti. She and her husband have two children, a girl about eight and a 16-month-old boy.

Demare is not really an area that one would expect to find as full as it is of families who qualify for the program. The land is rich. Sugarcane and corn grow well, and there’s plenty of forage for livestock. In addition, the market is right there. Residents can get their produce sold with very little difficulty.

But for the many landless and almost landless families who live in the neighborhood, Demare offers very little except the chance to earn about one-fourth of the minimum wage – the Haitian minimum wage – for a day of farm labor.

When CLM case manager Hilaire Nozan visited Saintanette in her home during the selection process, he was shocked by what he saw. Her baby was clearly starving. He was fourteen months old and lacked the strength even to lift up his head. Saintanette explains that she could see that the baby never ate anything, “But I didn’t know what to do.”

Hilaire knew he needed to act, so he arranged for the CLM driver to drive Saintanette and her boy to the Partners in Health hospital in Cange the very next day. Doctors there found the boy to be severely malnourished, and they admitted him for treatment. He was in such terrible condition that they had to keep him for almost two weeks, feeding him first intravenously and them with Partners in Health’s special fortified peanut butter.

The boy is fine now. And Saintanette couldn’t be more grateful. “If Hilaire hadn’t taken us to the hospital, my boy would not be here with me.

Guilène is a single mother of two, who lives in Pòsab, right along the national highway that runs south from Mirebalais to Port au Prince. She and her husband were struggling hard together. They had one child, and they started building a new home while Guilène was pregnant with their second.

He worked as a day laborer on a truck that would carry goods from Belladère, on the border with the Dominican Republic, to Port au Prince. One day, his driver took the dangerous unpaved route over the mountains, through Zoranjè to Titayen, so that he could avoid the customs office on the main road. While descending a steep hill, the truck’s brakes gave out. Both the driver and his workers died in the accident. Guilène was a widow, eight months pregnant with her little girl.

So she finished the house in the front of her mother’s yard. Her stepfather did much of the work that she couldn’t do herself. And she began to sell her furniture and her other household items in order to buy food to feed herself and her boy.