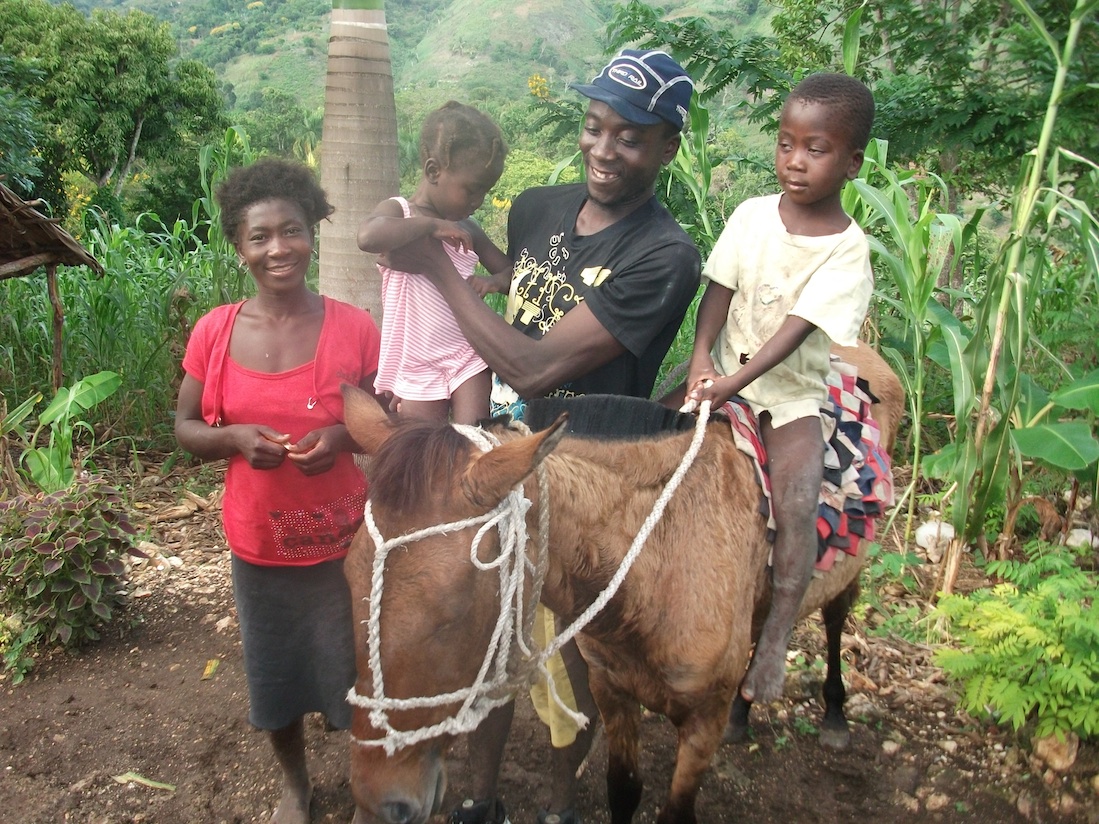 Elienne lives with her husband, Odak, and their two children in Gran Dlo, a small hillside neighborhood that runs along the stream across from the Partners in Health hospital in Bay Tourib. Though she is just 24, and though Odak is only a few years older, they have been married for eight years.

Until this year, they shared a one-room straw shack with Odak’s mother. It was tight quarters, but they managed. But now, thanks to Elienne’s participation in CLM and Odak’s hard work, they now have their own stone house, covered by a good tin roof. “We were able to give the old house to my mother-in-law. It’s close enough that we can be together, but it’s nice to live by ourselves.”

And the house isn’t the only change in their lives since they joined CLM. They used to get by on Elienne’s small commerce. “I would sell rice and oil and things like that.” Since they had no other assets, her commerce was regularly disappearing because as she would have to reach into it to feed her mother-in-law, her husband, and her kids. The couple had no other assets, so each time they ate up the assets in her small commerce, she would have to wait until Odak could earn enough money doing odd jobs to set her commerce up again.

But CLM gave them two goats and a pig, and their animals have flourished thanks to Odak’s care. And several of Elienne’s fellow CLM members hired Odak to build their CLM-financed houses, bringing in additional income that allowed them to add to their livestock and invest more in their crops as well. Odak is proud. “I’m not afraid of hard work.”

Last week, the couple was able to withdraw savings Elienne had accumulated from her six months of $1-per-day food stipends, add some of the money that Odak earned building houses, and buy a horse. It was expensive. They paid 4750 gourds, or almost $120. But it’s a good horse: still young, but big enough to carry a load for the six hours it takes to walk down to the market in Thomonde, and to the smaller markets closer to her home as well. I wanted a horse that was healthy, but also gentle. It has to be willing to carry my wife,” Odak says.

The purchase represents a key moment for a CLM member. It’s a moment we call “asset transformation,” when members take the smaller assets they have accumulated in the early part of the program and use them to make bigger investments. The bigger investment might be a large animal, like a horse, a mule, or a cow. Or it might be a plot of land.

Asset transformation is important for two reasons. On one hand, it puts a family’s livelihood on a bigger and broader basis. A family might choose to buy a cow, which can provide milk and raised status right away, and large annual chunks of income as it has calves. Or it might choose a pack animal that dramatically increases the potential for small commerce.

On the other hand, the process is important because of the choice it represents. Few of the women who join the program have had the luxury of learning to plan their future. They are too busy thinking about how to get food each day. Asset transformation is an opportunity to make a decision as part of a strategy the woman is developing for her family’s future life. The women get significant coaching from their case managers as they make this decision, but we make sure they are making it themselves.

Now Elienne has to make the choice she made with Odak work. “I go to market as much as I care. My case manager, Thermil, says that if you buy a horse but don’t use it to make money, you didn’t need it in the first place.”

“Our life is different now,” she says. “We had no goats, no pig, no house. Thanks to CLM, things are good.”