Jésula was born on 1973, in Tèblanch, a savanna located a couple of miles to the northeast of Mirebalais, just off the main road to Hinche. She’s from an extremely poor family that was not able to send her to school. Like her four brothers and sisters, she stayed at home, working in the fields and doing household chores. At fifteen, she got pregnant and decided to leave home with Solon Marcelus, the man who let her pregnant. At the time, she didn’t really know what it meant for her to be pregnant.

Because she came from an extreme poor family, she and her husband had nothing. They built a little straw roofed house close to her family’s, and there she gave birth to eight children: two boys, and six girls. Unfortunately, her husband was lazy. So she was the one who had to work to feed the entire family and pay to send the children to school.

To do so, she got into business, even without any stable capital. She had never had much of her own capital to start with. She would borrow money in the market itself to buy and then resell anything she could find. She would take the profit she made home and give the capital back to her creditors at the end of the day. She managed to earn enough that way to pay school fees for some of her children. She even bought a couple of goats.

Unfortunately, two of her daughters became sick. “When I asked my husband to help me pay for the treatment they needed, he told me to let them die.” Jésula sold all she had to save her girls. “That was the end of my relationship with him. I couldn’t stand his abuse any more. He would beat me. He wouldn’t do any work.” Having sold what little she had, she couldn’t pay anymore for her kids’ school.

She decided to move forward with a new partner, Jean Louis-Jacques, who already had his own family. She had one additional kid with him, but they broke up a few years later. Now, her youngest child is five years old.

When CLM began selecting members in Tèblanch, Jésula was accustomed to spending as much as a week without any food to cook. She had one goat, but was carefully saving it unless she needed money to pay for a sickness or death. “I was losing hope. I had too many problems. I couldn’t sleep at night. I used snuff to keep my mind away from my trouble.” 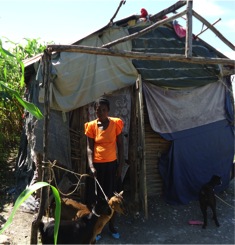 Since she joined CLM, she began receiving the food allowance, about $7 per week. She has received two goats, and she will have at least fifteen birds – a combination of chickens and turkeys – by the end of this month. She has now begun to dream.

She wants is to become a “grandanm.” That’s a word used for a wealthy woman. To Jésula, that means owning a cow, goats, and land to build a house on. She also wants to be able to sign her name. She dreams of being a respected member of her community.

She is very happy to be part of the program. She’s already begun learning how to write her name, and has 1600 Haitian gourds – about $40 – in her savings account. She promises that she will graduate from the program. “Now I realize I take less snuff because I have hope. I sleep at night.” Looking forward, it is easy to see her succeeding.

Marie Lourdes Pierre: The search for autonomy and dignity.

Marie Lourde lives in Six Evain, a village close to downtown Mirebalais. She’s a 30-year-old mother of seven children with three different fathers. Only six of her children are still with her, one of the died. Her first was born when she was just 16 years old. Her current partner, Marcelus Espagnol, is an older man married to another woman.

Like many CLM members, Marie-Lourdes does not know how to write her name. Her father never had the means to pay to send her to school. At 30 years old, she has never done anything to earn money. Feeding her family was a heavy duty because Marcelus was the one who earned whatever the family would eat. If he didn’t stop by the house, there was no food for that day. She has no profession, no job, no capital to start a small business, not even a chicken in her yard.

When she joined the CLM program in September, she chose goat-rearing and pig-rearing as her two activities. She has already received her two goats, and will receive the pig next week. She started receiving weekly food stipends from the start, and has saved 3250 Haitian gourdes, or about $77. But her challenge is serious. She has difficulty communicating, tending to merely laugh in answer to any question you ask. 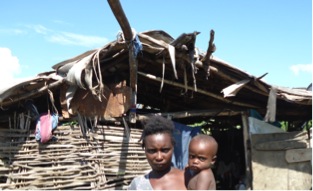 Nevertheless Marie-Lourdes sees her life already changing. “I couldn’t send my kids to school. Even though the school was free, I couldn’t buy uniforms. With CLM, all my kids are attending school this year because I have a little cash to pay for them.”

Her dream is independence. She wants to be able to support herself. And she wants to feel herself respected, just like other members of her community. She has never been invited to any kind of community gathering. The only one she ever attended was a funeral. “Nobody ever invites me because I am poor. When you are poor, you get no respect.” She used to be resigned, “malere pa sou moun” she explains. That’s hard to translate, but it’s like saying, “When you’re poor, you keep to yourself.”

She believes that she will graduate from the program. She will work hard to be successful, because she thinks it is her last chance to get her independence and the restoration of her dignity.