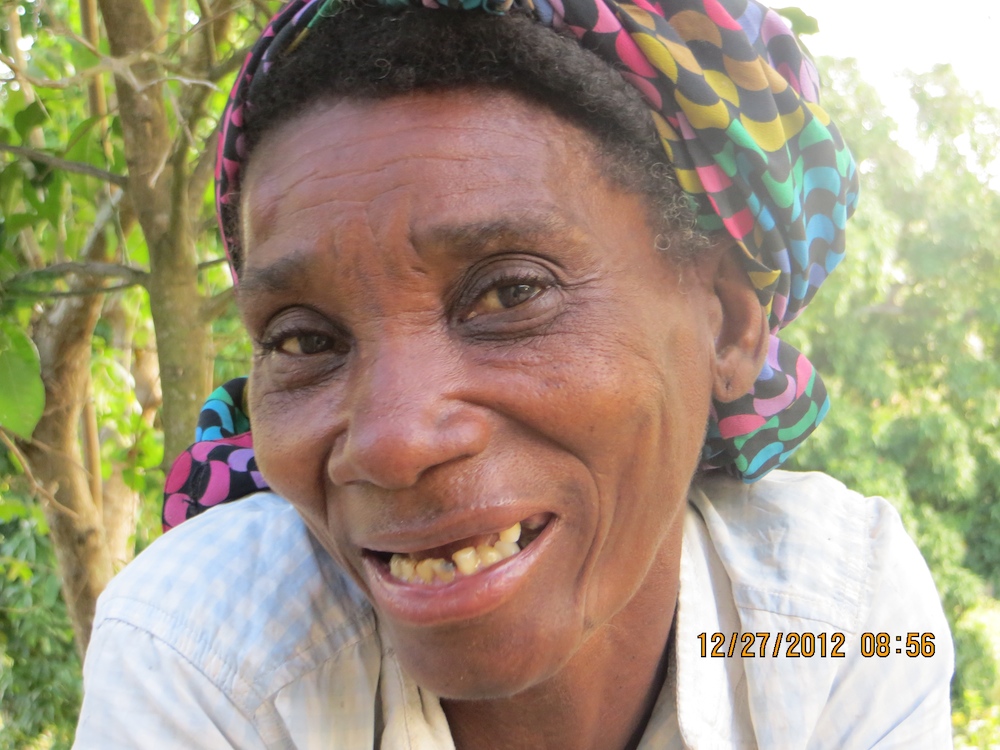 Elimène lives in Fond Pierre Jacques, a hilly neighborhood just southeast of the town of Baille Tourrible. It sits along both sides of the road that winds from Thomonde up towards the Partners in Health clinic that is our base in the region. It’s just beyond and uphill from the clinic. The region has nothing but houses, trees, and farmland. Residents of Fond Pierre Jacques plant fields both there and in the unpopulated region further to the east, along the path that leads to Platanal.

She wasn’t one of the women originally selected to be part of the CLM program in the Baille Tourrible region. We had not initially even visited her house when our selection process began. Somehow, she didn’t get onto our list for home visits. It’s not that unusual. Sometimes potential CLM members are so isolated from their communities that the local residents who help us develop our lists fail to even consider them. They don’t exist.

In Elimène’s case, though, that’s hard to imagine. Her house sits right along a major path, and it’s a substantial house, though it was in very bad disrepair. It’s much more likely that she and her husband learned to conceal their poverty, their regular hunger, from their neighbors. We develop our lists at public meetings, so if her neighbors had learned to overlook her poverty, her name would have ended up on a list of families that don’t need CLM.

Final selection of CLM members is complicated in all sorts of ways, from the basic need to get to the truth out of people who have every reason to think they should hide it to the funding-driven need to find exactly a certain number of members. The latter issue means solving a puzzle. Nothing ensures that the number of people who need CLM in a region is equal to the number we can serve. In fact, it’s pretty unlikely. To launch a cohort with exactly the number of members that a grant requires, we must piece together pieces of a territory that give us the number we need and figure which other areas we can most sensibly leave out of the program until the next funds come along.

We invited the right number of women for our new cohort to the first enterprise training in Baille Tourible, but by the end of the training we knew we had a couple of slots to fill. Several of the families whom we had invited to join decided not to participate, and a few of the families we had thought qualified turned out to have additional assets that we hadn’t initially seen. So by the end of the training we were short a few families.

Our case managers are always looking for families that need the program so that we’ll be ready when an opportunity arises. One of the ones working in Elimène’s neighborhood was Wesly, the most experienced one we had on the original Baille Tourrible team. Wesly noticed Elimène’s house, and thought that it deserved a closer look. And when we realized we needed to fill out the cohort, he interviewed her at length. He felt that she was qualified, so he had her meet Emile Mésidor.

Emile was helping us manage the launch of the CLM program in Thomonde. He would have the final word. Elimène remebers her meeting with Emile very well. “He asked me a lot of questions, about what I had and how we lived. He asked where we kept our cow, but I told him we didn’t have one. He asked about my horse too, but I said it belonged to my husband. I didn’t have any animals of my own at all. He ‘s the one who said I could be in CLM.”

They were living at the time with their youngest son and a granddaughter who had been left in their care, supporting themselves by farming and with a small tobacco business. Elimène would buy the tobacco in Hinche or Thomonde and then sell it in one of two markets in Baille Tourrible.

She was making a small profit now and again, but she couldn’t sustain it. Whenever it came time for heavy agricultural work, the commerce would collapse. She wouldn’t have time to buy or sell. She’d drain it of capital to buy food for her family until harvest. And even then, they never had enough. They were always hungry until their crops came in. Even in good years, they might have stretches of several weeks when they had little to eat. In bad years, things could be much worse.

So we invited her to join the program. She chose goats and a pig as her assets, and got right to work.

Goat rearing didn’t start very well. We gave her two goats, but they were small ones. One of them quickly became sick. Elimène, however, was determined. “I struggled and struggled with it. It finally pulled through.” The other was healthier, but they both were small when she received them. They have finally produced offspring, but it took much longer than it should have.

Pig rearing was more successful. It is risky business. Mortality among pigs is relatively high. But it can be quite profitable when it works. Elimène’s pig managed to raise four piglets. She sold three of them, and is now raising the mother and a younger female. She chose to sell them very young. It is less profitable, but a lot less risky and a lot less work. Pigs require a lot of care. She figured she’d have an easier time if she wasn’t managing too many of them.

She took the money she got from selling two of the pigs and bought beans at harvest, when their price was low. She’s now storing them until planting season, when she’ll be able to sell them profitably.

Her biggest success, however, has been with small, regular commerce. “They didn’t give me commerce, but Titon [her case manager] said I should try to start one if I could.” She talked to him about the tobacco business she once ran, and they agreed that she would try again. “You have to sell something that other people don’t sell. I’m the only tobacco seller in Baille Tourrible.”

So she took some of the money that she had saved up from her weekly food stipend, added the money from the third piglet, and went to Hinche to buy. There, she discovered a new product. “I always sold local, Haitian tobacco. But people were asking for the darker imported tobacco that they like to use for snuff. Now I sell both.” She found that she could get a cup of prepared snuff in Hinche for 200 gourds, or about $5. But she could buy the unprocessed foreign tobacco it’s made from for half that much. She makes the snuff by drying the tobacco in the sun, and pounding it into a fine powder. She then discovered that she could cut her costs even further buy blending the darker tobacco with the less expensive local product.

So her tobacco business is more profitable than it ever was and, what is just as important, she has come to see its fundamental importance. “I won’t ever let the business collapse again. Even if I can only sell on Saturdays and Sundays, I’ll keep it up because it means we always have food in the house.”

And her ambition is now larger than food on the table. She wants to start buying more land. As committed as she is to commerce, she really sees herself as a farmer. “Whatever you think I look like, I know how to work with a hoe and a sickle.” She wants more farmland so she can make more from her crops.

Her plan is simple: “I’ll keep taking good care of my animals, and put away money whenever I can. If you can sell a couple of goats or pigs, and can add some money from a harvest, you’ll already have enough to buy a small plot.” In a couple of months, she’ll buy a horse so she can get larger crops and the fruit from the trees in her yard to market, too. That will add a lot to her income.

It is pretty clear that Elimène is well on her way to a better life. She has solved her family’s hunger problem, and is looking to a future with an ambitious but very well-founded hope.