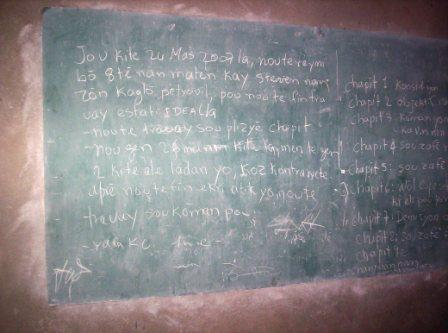 The last week or so has been important for the group in Cité Soleil and for me.

The first thing that happened was trivial in a way, but very much telling. I arrived in Cité Soleil on a Friday afternoon, having spent the day at the Fonkoze office after arriving from Wanament in the far northeast corner of Haiti. When the guys saw me, they invited me to hurry up and change clothes so that I could go play basketball with them. The unimportant side of this is that I used to really enjoy playing basketball, but hadn’t played in several years. So though I was a little nervous about playing with a bunch of spritely young men, I was very pleased to be back on a court. The important side of this is that the basketball court is several blocks from my room in Belekou, in the very heart of the neighborhood.

Here’s why that’s interesting: Since I started going to Belekou, I have spent all of my time either inside my room or on the street right in front of it. The room is on the second floor of a building at the intersection that leads into the neighborhood. When we started meeting together back in October, the guys I work with asked the gang leader who controlled the area whether my presence would be alright with him, and he said he had no objections. Even so, the guys always thought I should avoid raising questions about my presence in anyone’s mind, so they more or less insisted that I stay right where we work together and not stroll around other parts of the area.

But things have changed since UN forces took over the area about a month ago without firing a shot. It’s quite calm. And though residents resent the presence of the occupying force and though they shout curses and slogans when armored personnel carriers make their regular, heavily-armed rounds, they also seem happy about the peace. When the guys invited me to play ball, it required that I walk deeper in Belekou than they had ever allowed me to go, and they did so very casually. This was a clear indication of the improved safety that they feel.

The importance of the second thing that happened is hard to judge with certainty, but it’s very promising at least: The guys spent the last two days writing out a formal charter for their organization and electing its officers. The name the chose is “IDEAL,” which stand for “Independence, Development, Education, Association, and Lawfulness.”

It was nevertheless important in at least a couple of respects. For one thing, it’s something that they’ve wanted. From my very first meeting with them, they spoke of their sense that they needed to be organized. They have felt, rightly or wrongly, that their being part of a recognized organization, with an official charter, letterhead, and membership cards will give them an identity that they’ve lacked. Though I tried to convince them that they should link their identity to what they accomplish together rather than to pieces of paper, they have found my reasoning to be only very partially satisfying. Though several of them are rightly proud of the progress they’ve made through the English lessons that Héguel and I provide, it’s been clear enough that they want something more. And they think that they now have what they were looking for. In addition, their willingness to stay focused over the course of two days on the tedious work of formulating their charter is a testimony to how ready they are to invest themselves in moving themselves forward.

In writing down their charter, they got help from my long-time colleague Gerald Lumarque, a community organizer and literacy teacher from Fayette, a rural area outside of Léogâne. He’s helped numerous grassroots organizations establish themselves. He came to Cité Soleil and met with them in our room there for a day. It was his first trip to Cité Soleil, and he was very nervous. In fact, midway through the week he contacted me to say that he had been advised not to go there, that it was too dangerous. Only when I told him that I would be sleeping there the night before he came to work, did he change his mind.

At the end of that first day, we all went up to my house in Kaglo. The twenty-six of us spent the night, and then worked through the next day until the statutes were completed.

The photos below are from the evening and the following day in Kaglo.

I went up a little early on Friday to help get the house ready. Neither Byton nor I are good about doing dishes or keeping things clean, so there was some work to do. As always, Ti Kel and Mackenson came to help. 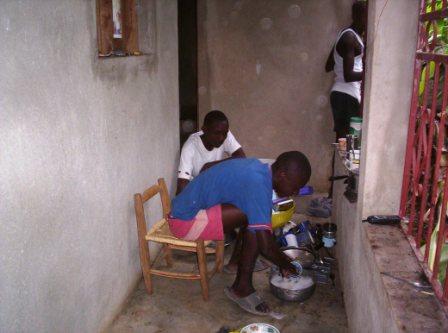 Lilly very quickly made new friends. Here she is with Haril. He’s an eighth-grader, his parents’ second child. He earns what he can by collecting rainwater in an otherwise-unused basin and washing motorcycles. 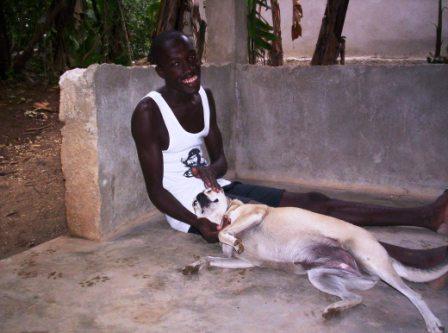 Here she is with Daniel. Daniel is less fortunate than Haril. He isn’t able to go to school, though he went long enough that he can read and write. He earns a living fixing the flat tires that are so common among the motorcycles and bicycles that work in and around Cité Soleil. 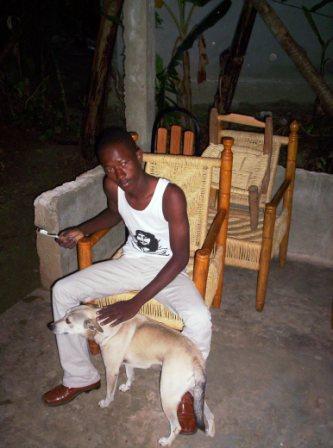 Once Gerald and the whole team got to my house, they had a long discussion about what they had achieved through their first day of work and how they would organize themselves for the second day. 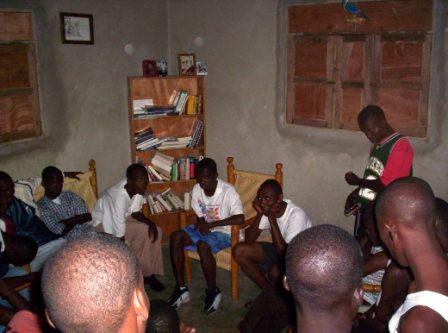 The house wasn’t really designed to sleep twenty-six, but we managed well enough. 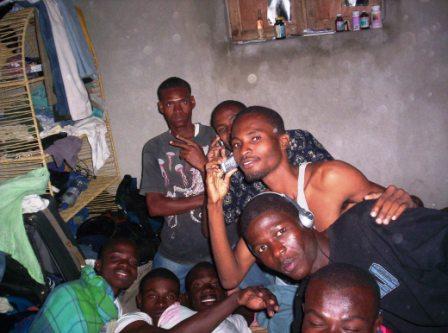 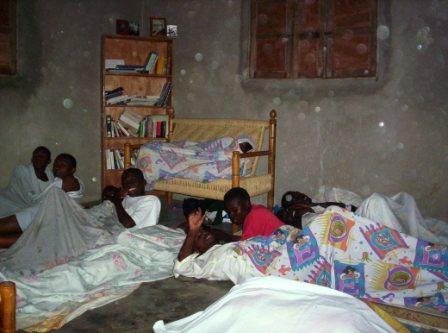 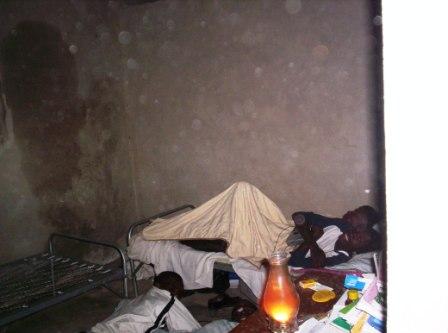 When they got up Saturday morning, we had a small breakfast of coffee with bread and butter. Here are some of the guys, ready to get to work. 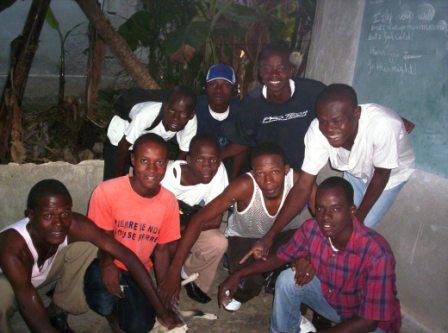 The group spent most of the day following Gerald at the blackboard on the front patio, working out the rules they would set for themselves. He would write down proposed formulations. They would then debate them, tinkering until they came to agreement. Their newly-elected Secretary General would then write them down. The rules covered everything for admission to the group, to its governance, to its name and objectives. 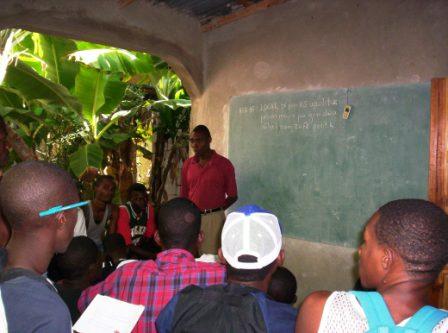 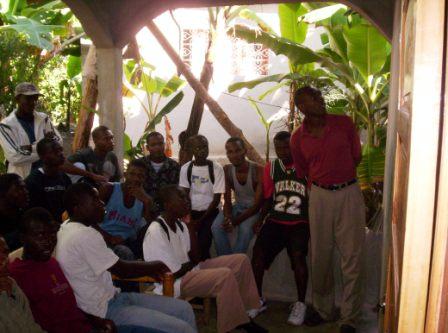 At the end of the day, before they left Kaglo, the group asked me to take a picture of all of them, standing under the great Mapou. 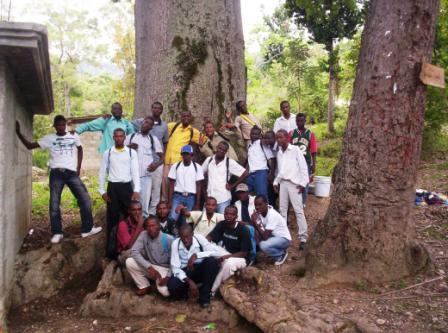 It will take more to make the group into something important than it took to write out the statutes and elect the officers, but everything has to start somewhere.