Laumène has been sick. She hasn’t been able to work around the house. She was having a hard time even just getting out of bed. She felt rotten, but she wasn’t going to do anything about it. “I was waiting for it to pass.”

Her case manager, Martinière, was having nothing of it. “When he got up here to see me, he was really angry. When he calmed down, he called his office on the phone to get them to send a truck to pick me up, then he came back to my house and helped me organize myself.” Laumène credits Martinière with setting things in motion for her. “He was right. My life was important to him.”

Laumène ended up having to spend four days in Mirebalais, between an initial doctor’s visit, lab tests, and second consultation based on results. Thanks to Martinière’s arrangements she felt well cared-for for all four days. “They took care of me at the office, and found a good place for me to spend the nights. All of that took effort.”

The experience left her feeling good about the CLM program and the team she works with, but her own recent efforts have her feeling good as well. Her home repair is complete. She has a little u-shaped house with two small rooms across the base and a separate, even-smaller room on each side. The smaller rooms are only accessible from the outside. They’re not connected to the larger ones. She set one aside as a storeroom. “I’ll keep the key to this room myself. When I start my small commerce, I’ll need a place to keep things secure.”

And for now, her brother has borrowed the other. He’s repairing his own house. “I like having an extra room. If family comes to visit, I can give them a separate room. If our sheets are dirty, they don’t have too see. And I like having larger rooms, too. I’m still not feeling well, so I didn’t feel like clearing my sleeping mat off the floor. But in this house the kids can just walk around it.”

Though she’s been dealing with some set backs around her livestock – she lost a goat and her pig – she’s working hard to overcome them. She bought another goat and a couple of very young turkeys, too. 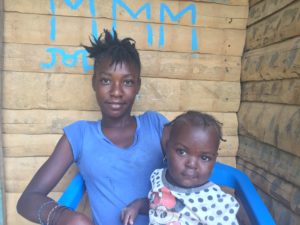 Her girl’s father had sent her the money to do so, but since the end of her weekly stipend she’s had a hard time just dealing with daily expenses, so she talked to the man, and they agreed that she would use the turkey money to buy food and some other necessities. He’s promised to bring money for a turkey when he comes back from the Dominican Republic for an Easter visit.

But she knows she needs some way to start earning money regularly, and she has a plan. “I want to start a small commerce. I’ll sell sugar and roasted coffee. My mother sells bread, and her customers are always asking for sugar and coffee, too.” She’s talk it over with her case manager, and he thinks it’s a good idea. They agreed that she’d withdraw 1000 gourds – a little less than $15 – from the account she keeps with him to get started.

That’s when she ran into a problem, however. They made their plan last time he visited, and he even recorded the transaction. Then he forgot to hand over the money before he went to the next house. The whole thing seems to have slipped his mind.

That’s okay in a sense. He remembers now, and will correct his error. It has just set her back a couple of weeks.

But the larger issue is that she let him walk out of her yard without saying anything. She wasn’t comfortable enough to say, “Hey, you forgot to give me the money.” His status as an authority figure, even one whom she’s fond of and trusts, got in her way.

The two will have to works towards building her confidence. She won’t succeed in the long term until she is comfortable asserting herself.

Louisimène was out in the field, working in asosye, to help someone plant beans. So the next house was Juslène’s, and she and her case manager have a lot of work to do. 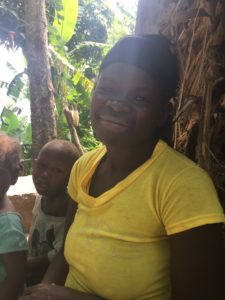 It is increasingly clear that Juslène has developmental issues in her way. She doesn’t communicate well, nor has she been able to think through even a small part of a plan.

Progress on building her home has stopped, and she seems hard pressed to explain it. She’s been depending on her partner for all the work that the couple must contribute, but he seems responsible for the initiative as well. His focus is elsewhere lately, probably on getting his beans into the ground, so there hasn’t been any progress at all.

But Juslène’s inability to get focused enough to make a decision has broader implications. Her boy is sick. Poor hygiene has left him with rashes on both of his legs. He seems sick, and she’s not planning to get him to help. Though she followed her case manager’s instructions to bring him to a mobile clinic we arrange to check him for malnutrition, she doesn’t think the rashes are important enough to do something about.

Her economic progress has been limited as well. Though one of her goats had a kid, the kid soon died. More importantly, her pig, which was her largest single asset and the one with the greatest potential for return, died as well. Thanks to the intervention of a member of her Village Assistance Committee, she was able to sell it to a butcher. But butchers don’t pay cash for sick animals. They buy them on credit, and Juslène hasn’t seen the money yet. 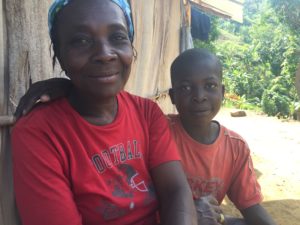 Idalia has made some progress since we last saw her. She’s settled into the idea of remaining in Gwo Labou until she graduates from the program. Then she plans to return to her home in Jinpaye, in the mountains between Kolonbyè and Granbwa.

But she doesn’t want to stay in Gwo Labou permanently. She and her husband were able to build a house and install a latrine on a small piece of land that overlooks a rental plot they farm and another plot they work as sharecroppers. But she doesn’t like living on land that isn’t hers. What’s more, she doesn’t feel comfortable with her neighbors. “They’re the kind of people that don’t bother to ask us how we are, even though they’re my husband’s family.”

So she’s decided make her investment in her home minimal. She had her son build the house so that he could get the stipend that CLM provides to builders, but he isn’t really a skilled builder, and the work he did was poor. She, her husband, and two of her boys now live in one small room, and though it is covered with tin, the roof is much lower than CLM homes normally are. Not only that, but she and her husband decided not to buy the palm trees they would need to wall the room in sturdily. They used tach, the palm-seed pods normally used as the roofing material of the rural poor, so the house is very fragile. She and her case manager will need to talk over that decision. 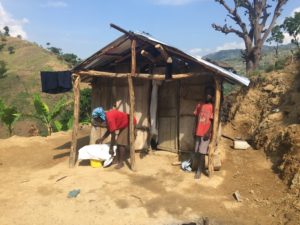 She is struggling with her livestock, just as Juslène is. She lost both her pig and one of her two goats. Like Juslène – and Laumène, for that matter – she hasn’t been able to collect the money she’s owed for the lost livestock. All three had livestock sold for them by a committee member, but of the three, only Laumène seems comfortable pursuing the matter.

She took the first steps to getting her older boy to a doctor, but her youngest one is asthmatic, so he really needs to get treatment, too. Getting them care is possible. Her case manager can work together with the CLM nurse to ensure that the boy gets seen if Idalia can bring him to the hospital, but she has consistently been missing or showing up late for appointments. The hospital is so overloaded, that its staff feels it has to be strict about the way it provides care. So if Idalia can’t learn to arrive on schedule, her children may miss out on the care they need. That’s something for her case manager to work on with her.

Rosemitha is making progress, though she’s still struggling. Her three goats are now five, with one of the adult females ready to have kids.

Her small commerce nearly disappeared when a load of plantain ripened before she could get it to market, but she and her husband decided that she should try again. So she took the 600 gourds – about $8.70 – that remained, and she bought tomatoes and onions at the market in Kolonbye. She then carried that load for sake in the main market in downtown Savanèt.

Her results were poor. She returned with only 500 gourds, though she resisted her desire to snack during the day. She thinks she made a mistake, but she’s not quite sure whether she bought too dear or sold too cheap. She had calculated a profit after her purchase, but when she got to Savanèt she fold that she had to break up her merchandise into larger piles than she had anticipated. Customers expected a pile of six tomatoes for the price she had expected to sell a pile of only four.

She and her husband have decided that she should give it one more try with tomatoes and onions this coming week. If she doesn’t make money this time, she will think about another business.