Carmelia Jarbath became a Fonkoze member in 2009, when she joined a newly forming center for its Ti Kredi program, in Madival, a small community on the road that rises eastward out of the coastal city of Marigo. Fonkoze had established Ti Kredi as a way to help women who were not yet in business. The women would receive and repay three small loans in six months, while participating in tailored education programs. During those six months, they would save up to pay their one-time registration fee and the balance they would be required to have in their savings account to secure their first standard solidarity-group loan.

Carmelia had been aware of Fonkoze credit programs for some time. In fact, she played an important role in the credit center in Madival. The center had been flourishing long before the Fonkoze branch in Marigo that serves it was, having been established by credit agents working out of the branch in Jakmèl, farther west along the southern coast.

When Fonkoze decided to offer education programs in Madival– basic literacy and business skills classes at first – it tried to recruit one of the borrowers to teach them. For Fonkoze, recruiting teachers from among its borrowers – rather than from local educators, who were mostly men – was an important part of building leadership and solidarity.

But the center in Madival had no one among its members with the education that teaching literacy would require. So, its elected chief, Iliamène, recruited Carmelia to be their teacher. She was then in high school. She taught basic literacy and business skills, and she really liked the work. She felt that the training and the experience made her better at communicating.

When she eventually joined Fonkoze as a borrower, it was almost by accident. A neighbor had asked to use her picture ID. She wasn’t sure why. One day, Carmelia went to the Fonkoze branch in Marigo to collect the small stipend she was receiving for teaching the classes. She was surprised when the branch’s teller said that she could not pay her. There was a hold on her stipend because she was behind on her loan repayment. But she hadn’t ever taken out a loan.

It turned out that her neighbor had used her ID to take out her own loan. She hadn’t had ill intentions. She just wanted to join the credit program, and didn’t have her own ID. At first, she repaid regularly, and the situation didn’t come to light. But when Fonkoze’s branch staff saw Carmelia’s account blocked, and knew that she hadn’t borrowed anything, they corrected things immediately.

At the time, Fonkoze was in the process of establishing a Ti Kredi center in Madival for women too poor to join the existing credit center, and Iliamène was helping out. “The women they were signing up really were much poorer than the ones in Iliamène’s center. They were too ashamed even to asked for credit there.” Carmelia asked Iliamène for advice, and decided to join.

Her first loan was for 1000 gourds, which was worth about $25 at the time. “I bought some things I thought I’d be able to sell quickly: some girl’s underwear and pens and pencils for kids in school. When I sold everything, I had 1500 gourds.” Since she was still living with her parents, she didn’t have to spend her profits, so she just reinvested them in her business. And after six months she was ready to graduate from Ti Kredi: She had a small but steady business, and was ready to move forward with standard solidarity-group credit.
From the start, the other women even chose her as their center chief. She would be responsible for representing their interests within the institution, but she would also work at center meetings alongside the credit agent to ensure that his recording keeping and the receipts he gave members – of whom many were unable to read – were correct. She liked being a center chief. It made her feel respected in her community. The women in the center listened to her and they showed that they trusted her. She received training from Fonkoze on center management: how to organize reimbursements, how to lead discussions, how credit works. “It was training I would have paid for, but I got it for nothing as part of the work.”

She continued with Fonkoze, as a borrower within a five-person solidarity group and the elected chief of her center. She would vary her commerce by the season. Sometimes she’d sell school books and supplies. Sometimes it was cosmetics. When nothing else was selling, she’d turn to groceries: rice, sugar, flour, oil, etc. She took larger loans as her business grew, but smaller ones occasionally when business would slow down. Even if she reduced the size of her loans, however, she never dropped out entirely. “The women who joined with me, the members of my group, never wanted me to drop out. They didn’t want to take loans without me. If I wouldn’t sign, they wouldn’t sign.”

Each year, Fonkoze holds an assembly for the center chiefs for each branch. Since Carmelia and Iliamène each led their own center, they would attend these meetings together. Those local assemblies would elect representatives to attend the annual general assembly in Port au Prince, and Iliamène was frequently sent from Marigo. After the general assembly, Iliamène would give a report to Fonkoze members back in Marigo. Carmelia liked to hear the news.

Once Carmelia asked whether she could go along. Iliamène was delighted. Still unable to read and write well, she could leave it for Carmelia to take notes. And Carmelia was just anxious for the experience, even though since Fonkoze would only cover the expenses for the women who were elected, she would have to pay her own way.

When they got back to Marigo, she listened to Iliamène’s report, but she had a lot to add. She had extensive notes to work from. The next year, she nominated herself to be a representative and was elected easily. In the following years, she went to three national assemblies as a representative for Marigo, and she always enjoyed them. “I liked hearing what other women would say. We were all there together, and we all had the same goals. The meetings made me feel independent. They made me feel like an adult.”

The assemblies discuss issues that are important to the women as Haitians, as businesspeople, and as Fonkoze clients. But they also elect members of Fonkoze’s governing board. Carmelia was nominated a first time by the manager of the Marigo branch, but she lost that election. The next year, however, she tried again and was elected. She’s into her second year on the board, and loves the opportunities it has offered her. “I’ve met all sorts of people and been to places I never would have gone. And I’ve gotten so much training.”

Through it all, Carmelia has kept up her business, using profits to start building her own house just downhill from her parents’. She’s continued to take out loans as well, but when she finishes her home, she’ll be ready to take her business to another level. It will include a storeroom for merchandise, and she plans to start selling groceries wholesale to smaller businesses in the area around where she lives. Right now, they have to send down the mountain to Peredo and Marigo to buy what they need. “I think I’ll find plenty of customers.”

She plans to continue as part of the credit center she was part of starting, but wants to shift to an individual loan. “I’m ready to take out my loan on my own.” 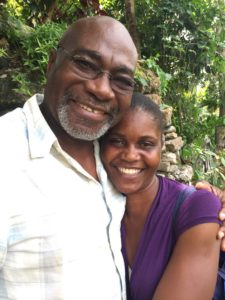