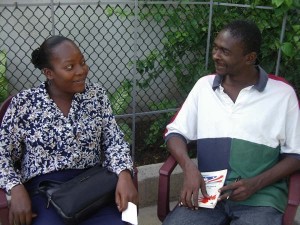 Frantzie and Heguel are shown sitting here. The picture was taken at the fourth annual Open Space Meeting on Open Space, at the Villa Ormiso in Bizoton, Haiti.

Frantzie Cyril: I’ve known about Reflection Circles since before 2000, but I really became active when I started to help others learn about them in 2001.

HM: You say that you’ve worked to help others learn how to use Reflection Circles. How does that work?

FC: Brother, when people first learn about Reflection Circles, they can spend a week just asking themselves questions. They can want to ask themselves over and over again what Reflection Circles really are about. After two or three weeks, they begin to understand Reflection Circles without problems.
Reflection Circles offer something really important. They help people learn to take responsibility for their own education. The Reflection Circle method, which doesn’t depend on a strong leader, allows people to develop their own capabilities. Every participant learns from all the others.
The people I work with show how excited they are about Reflection Circles in the way that they talk about the activity. They say that our Reflection Circles are working inside their minds without their even knowing it.
Someone shy, who’s afraid to ask questions, afraid to speak in front of an audience, someone who lacks self-confidence – these are problems that can interfere with their learning. Reflection Circles can help them put all those problems behind them. There are all sorts of thoughts that can make someone believe that when they speak, others will judge them. Participation in Reflection Circles can help people feel a sense of their own value because they come to see that their ideas are very important, that they are helping other people learn. Then, too, each learns from others as well. You start to ask questions about everything you see around you. You become someone capable of living in society without difficulty.

HM: Have you used Reflection Circles in traditional schools only?

FC: I have been using Reflection Circles with children in traditional schools. I had one experience where I used Reflections Circles every week for a whole year with the same group of students. I was not the regular classroom teacher, but I met with the children every week. When I began working with the group, neither the teacher nor the students were very skilled. They hadn’t begun to know how to ask questions. One or two of the kids showed promise, but these few had a hard time asking questions.
By the end of the year, the students were quite sharp. Reflection Circles had a clear, positive effect on them. When the children returned to school the following year they themselves asked for Reflection Circles in their new classroom.
An experience like that is extremely valuable within a traditional school. One of the serious problems such schools face is that children in them aren’t learning to ask questions.

HM: In what ways do you believe that Reflection Circles can help Haiti?

FC: Brother, when I imagine what would happen if there were Reflection Circles going on all throughout Haiti, I believe that we would be able to build a whole new society. We have lots of problems in Haiti right now, but the cause of them all is that people fail to respect one another’s ideas. They don’t know how to talk with one another. They can’t accept differences of opinion.
People who experience Reflection Circles have no problems with people of disagree with them. They come to see it as something perfectly normal. There is no rule that says we all have to agree. Reflection Circles could help our society a lot in this sense. I think that if all Haitians were involved in Reflection Circles, our society could function without much trouble.

HM: Everything has its good side, but it has its bad side as well. What problems do you see with Reflection Circles?

FC: Keep in mind that Haitians aren’t really used to paying attention when others speak. We aren’t really used to respect others’ opinions. Reflection Circles can be difficult at the start because people don’t know when to speak. They get bored listening to others. They can then feel they need to challenge or even reject the principles that guide Reflection Circles.
There are those, for example, who start talking without waiting for others to finish speaking. They cannot respect the rule that says that one should interrupt when another is talking.
But these problems start to disappear as participants get used to the Reflection Circle rules.

HM: What comparison would you make between Reflection Circles and Open Space meetings?

FC: There are some similarities between Reflection Circles and Open Space, but they are not the same thing. People mainly use Open Space for large meetings. Open Space is a way for people to find ideas.
Open Space is literally a space that opens up. It allows everyone in a group to express opinions. There are no frustrations in Open Space because every participant expresses what they feel and think. Open Space isn’t like a reporter who’s looking for something particular. In Open Space, participants are free to say what they think and feel, are free to share their own ideas about whatever subject they see before them.
Open Space doesn’t give power to just one person in a group. It gives power to everyone. The ideas we discuss belong to us. It depends on us to decide when we should talk about them. The Open Space process pushes everyone to take responsibility, but it also helps everyone stay relaxed. No frustration is possible.

FC: As for Reflection Circles, I’d just like to see more Haitians involved. I see nothing I can criticize in it. The only problems that arise are in the first days when someone is introducing the practice to a group, because Reflection Circles have rules and principles. But these problems never take long to solve.
The last thing I want to say to everyone in my country is that anyone who has the opportunity to get involved in Reflection Circles should just do it. It can help our country. It’s something positive. It can change the world.

HM: Thank you very much Frantzie for this interview. I hope we can speak another time.