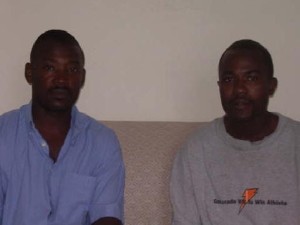 Héguel Mésidor is a Haitian journalist who lives in Pòtoprens. He recently spoke to Frémy César, the Haitian educator who founded the Apprenticeship in Alternative Education. I have made only editorial changes in Hèguel’s text, which he himself translated into English.

Frémy César: Alternative education is a practical approach to education. It is a way to help people take responsibility for educating themselves. It helps them discover their potential and create horizontal relationships between leaders and participants. Alternative education is education in which it is not just the leader who holds power. It gives all participants the chance to share power as well. The relationship it creates between leaders and those who participate in the activities they lead can create an environment of peace and of love.

HM: What do you mean by a “horizontal relationship?”

FC: Normally, one speaks of two different kinds of relationships, horizontal and vertical. A vertical relationship means “stop.” It can’t move either to the right or to the left. Reflection Circles are designed to avoid that sort of thing. When we speak of horizontal relationships in Reflection Circles and in Open Space, we mean that the conversations have been shared and the power has been shared too. Our relationship within the group is on a single plane. No one in the group is dominant, and no one is dominated. No single person has power; everyone has power.

HM: What tools do you use in the practice of alternative education?

HM: Can you tell me more about what Reflection Circles are?

FC: The object of alternative education is to create a healthy working relationship among participants. Reflection Circles have two big goals: First, to help people develop a deep relationship with what they read and hear, and, second, to help people learn to teach themselves. Different means have been adopted towards those goals. Reading a text or studying an image are two examples.

HM: In what sorts of activities can Reflection Circles be used?

HM: How does it work when Reflection Circles are used in traditional schools?

FC: Each of our activities has its own objective. For example, when we work primary schools, we are helping the students develop their capacities in order to create a participatory classroom where there is an atmosphere of collaboration between students and their teacher.

Students should not simply wait passively for their teachers to tell them something they need to know. Students can discover their own talents, too. They can discover the power of their own thoughts. Reflection Circles can show students how to share their thoughts and how to exploit them.

When we work with adult literacy groups, Reflection Circles have helped participants express what they already know. Adults who cannot read or write are nevertheless full of knowledge. This is hard to recognize when they are not in an atmosphere that invites them to express themselves. Reflection Circles and Open Space give literacy learners the chance to share their talents and their experiences. Literacy learners have a lot to say, and when they are in an environment that encourages them to express their thoughts, those thoughts can be very useful to other members of their group. Many of them have never had spaces in which to say what’s on their mind. Reflection Circles give them the chance to express what they have inside of them.

When we work, on the other hand, with grassroots organizations rather than schools, our goal has been to help the organization’s members create a space of communication, create a strong democratic world. Especially in organizations that have a single director, it is important to help that director learn that the organization does not belong to him or her. This is very difficult. It is hard to accept the need for all members to share in leadership. It requires that members grow into their shared responsibilities, and the director needs to feel comfortable with that development. Reflection Circles can help that progress.

HM: Are there differences between Reflection Circles and Open Space?

FC: There are fundamental differences. For example Reflection Circles use texts, pictures, proverbs, and stories as the basis for the conversations. Open Space uses only a theme.

Sometimes there is not even a set theme. Instead there is only some general motivation that pushes people to come and participate. A group of people simply comes together and presents one another the various projects they’re working on and the meeting works without any problem.

In Reflection Circles, we talk about four rules. The first rule is to pay close attention to the text, the proverb, or the picture. The second is to listen to what others say. The third is to speak clearly. The fourth is to respect others.

As you can see, the two practices are totally different, even if they both aim towards democratic participation by all in an atmosphere where all learn from one another.

HM: You have been involved with alternative education for a long time. What are the main problems you face when introducing alternative practices into the traditional system?

Literacy instructors are not always mature adults. Many of them are young people. Those young people are the ones I’m most interested in. They need a comfortable way to bring their literacy centers to life. Our work will influence people like that.

HM: What challenges have faced those who are developing Reflection Circles?

FC: Finding a way to use Reflection Circles with people who neither read nor write. We are now overcoming that challenge with a new book that uses images and Haitian proverbs instead of texts for discussion. The new book is called Annou Reflechi Ansanm, or “Let’s Ponder Together.”

HM: What differences do you find between Reflection Circles that are based on texts and those based on pictures?

HM: What are the difficulties you find in working with people who cannot read or write?

FC: There are difficulties everywhere. Even so, just because someone does not know how to read words on a page, that doesn’t mean that they can’t read at all. They can, perhaps, read a picture. Consider the reading that they are doing in their lives already. When they see something and they say “this is a mango” or “this is a lemon tree” or “this is a horse,” they are reading the world. They already know how to read. They just haven’t had the chance to learn to read the written word yet.

It isn’t hard, in fact, to read a picture. Someone who doesn’t know how to read or write language can still discover all sorts of things, maybe even more than someone who can read and write because they will pay more attention to the details.

HM: Have Reflection Circles spread through all of Haiti?

FC: It is not yet all through Haiti, and that isn’t yet in our plans. But it has touched many parts of the country, such as Pòtoprens, Okay, Okap, Leyogann, Pestel, Fondwa, Site Soley. After the various experiences that have already been undertaken it is the way people are moved by the work, the way they love it, that shows that the work should continue.

HM: What would you like to see Reflection Circles change in Haiti?

FC: The one thing I would like to see Reflection Circles accomplish is to create a space of love and respect between those who participate in it.

HM: What do you mean by “respect”?

FC: Respect is a very subjective matter. It’s not easy to know whether someone truly respects you.

One thing that we watch for is when, in a conversation, some people try to do all the talking. They don’t give others the chance to express themselves. Such people are demonstrating that they don’t believe that the others they are with have anything to say. Another sign is when someone fails to pay attention when someone else is talking. When someone doesn’t want to pay attention to what another person has to say that shows disrespect.

HM: What is the most important result you’ve seen in the work so far?

FC: One big result of the work has been that it’s created a network of people who are working together.

HM: What would you like to see Reflection Circles create?

FC: I hope that Reflection Circles will keep building a new mentality among Haitian people, one in which individual responsibility and collective conscience are tied together in everyone.

HM: What do you mean by “individual responsibility” and “collective consciousness”?

When I speak of collective consciousness, I’m thinking of how the groups we work with improve at working together. As new situations develop for a group, all the group’s members need to be willing to play their parts.

HM: Where could someone turn for more information about Reflection Circles?

FC: There are a several resources available. Fondasyon Limyè Lavi is an example. That is the organization that took the initiative to introduce Reflection Circles into Haiti. There is also the internet. Someone who wants more information should check the Touchstones Discussion Project (www.touchstones.org). There is a lot of information on their site because Reflection Circles are a Haitian adaptation of Touchstones’ work. Generally, I think it’s easiest for people to gain a good understanding of Reflection Circles if they are working within a Reflection Circle group. They get more out of everything they read or hear about the project because they get to practice the principles and know them first hand.

HM: What do you think Reflection Circles can do for Haiti in terms of development and in terms of education?

FC: I am very shy about speaking of development because it is such a vague term. If someone were to ask me about social change, however, I would say that Reflection Circles can help a lot because I believe that any positive, durable change in education, anything that opens educational practice up, can have a good effect on the mentality of the people involved. It can help them see Haiti with different eyes. They can learn to think of Haiti as a space that they can make livable or unlivable. I am sure that Reflection Circles and Open Space can make contributions to the kind of social change we’re looking for.

As people learn to understand one another better, they will become better collaborators. They can think more positively, in a way that will help build a new society of peace, unity, and reconciliation.

HM: Thank you very much for the interview, Frémy.