Yesterday I was in Cité Soleil for the third time in the last couple of weeks. It seems important to share this fact as a sign of how the country is changing. Just a month ago, I would not have considered entering that part of Port-au-Prince. It has been the center of a kidnapping industry that took off after the removal of former President Aristide in February 2004. It’s been dangerous for outsiders and for those who live there as well.

It is there that Jacob was murdered last August. He was a long-time Cité Soleil resident who founded the group of artists whose other leaders have been living with me since late November. It’s been the base from which very heavily armed gangs have been operating, and it’s where kidnappers have been bringing their victims. And all this doesn’t even mention the most serious, persistent danger: dangerous living conditions, with few jobs or other sources of income, poor sanitation at best, overcrowding, and all the other problems that accompany serious urban poverty.

In any case, I’ve been there recently. The first visit occurred a few weeks ago when I was on my way back from Lagonav. I was on a bus, and when it got to the edge of Cité Soleil it did something no bus I had taken in over a year had done: it continued. Busses have been avoiding the area completely, taking various detours to do so. This bus went right along the edge of the Cité, and what was most striking was that none of the passengers complained. Haitian passengers feel free to speak up if the route a driver takes is not quite to their liking, but these passengers had no qualms about passing along a neighborhood they have scrupulously avoided for many months. I asked several who were sitting near me, and they affirmed that there was no longer anything to worry about.

My third visit to the area was a similar instance. I was on a bus headed to Lagonav, and it not only passed along the edge of the Cité, it drove right through. It took the express road to the north that has been all but abandoned since the beginning of the troubles here. Drivers have instead taken a much longer and more congested road through very crowded areas called Croix de Mission and Bon Repos. That detour can easily add an hour to the trip.

The second visit is the one I want to talk about, however. I spent Saturday afternoon walking around Cité Soleil with Jethro, one of the artists who have been staying with me. The main purpose of our visit was to see his grandmother, but we used the chance to wander a little. The comfort we felt was striking.

I had gone to Cité Soleil with him once before. That was in the summer of 2001. I was partly responsible for a Wonn Refleksyon workshop to be led by two of my Haitian colleagues. They had never led a workshop before, so my role was to provide them with support during the workshop and to help them evaluate their work afterwards. It’s a neighborhood that can be confusing, so I had asked Jacob whether he could send someone to help me find my way, and he sent Jethro. Jethro was a teenager at the time. He led me to the workshop the first day, and met me at the end of the second day so we could walk over to where he and Jacob and the others were making banana bark cards and other crafts.

When Jethro asked me a few weeks ago to visit his grandmother with him, I was pleased but a little surprised. He had been staying with me because he himself was in great danger in Cité Soleil. The night that Jacob was murdered, he had to hide with another friend under a neighbor’s bed while their workshop was ransacked. They fled during the night and spent several months hiding in the countryside before they moved in with me. During their first weeks with me they had been wary of getting to close to Cité Soleil, preferring to spend as much time as possible up on the mountain, going down to Pétion-Ville only on the most necessary errands.

But Jethro finally entered Cité Soleil on the day of city-wide demonstrations that brought supporters of René Préval into the streets to protest what appeared to be efforts to manipulate ballot counting. The demonstration Jethro was part of passed right through Cité Soleil. There, Jethro crossed paths with gang members close to those who had killed Jacob, and they assured him that he would now be safe if he wanted to return. The main murderers had themselves been murdered, and new gang leadership not only wanted, in a general way, to respond to Préval’s announced efforts to end the violence, but also felt that the murder of Jacob in particular had been unfair. They recognized that he had never done any of them any harm and attributed their predecessors’ decision to murder him to simple jealously.

The day Jethro told me all this, he was jubilant. We were hiking down to Pétion-Ville from Ka Glo. He had his arm wrapped around me as we walked, and he went on and on about how Haiti is starting to change. For all his exuberance, he could easily have been excited about a new girl friend. He was giddy. I don’t want to give the wrong impression: he’s prudent. He’s said that he’ll never live in Cité Soleil again. He understands things can change there as quickly as one gang leader is murdered and replaced by another. But he’s convinced that things in Haiti are moving forward, and he’s very excited about that.

It was important to him that his grandmother meet me, and I found that fact intensely flattering. His parents both passed away long ago. It was his grandmother raised him. She was the one who fed him, clothed him, and sent him to school. He calls her “//manman//”, or “mom”. She was worried about him, he knew, and he wanted her to meet the person he’s staying with, as a way to help her feel that he’s alright.

We took a tap-tap down Delmas to the intersection with the airport road and then took a second truck a little of the way towards the airport. We got off at an intersection that had been particularly notorious as a place of kidnappings. It was convenient for kidnappers because they could pick up victims from the heavily-traveled airport road and whisk them straight into Cité Soleil.

The intersection could not have been less exciting when we got there, and we strolled along the very road into the Cité that the kidnappers had been using. Jethro exchanged greetings with various people he knew, and I spoke to the children who amused themselves by calling out “//Blan! Blan!//” as Haitian children who see a foreigner often do.

After we crossed the street that defines where Cité Soleil begins, we walked along it for awhile. Then we came to a door. It was really just a rectangular piece of tin roofing, nailed to hinges attached to a scrap wood frame, but it appeared to be the entrance to a private residence.

It wasn’t. It opened onto a small yard that led us directly into an alley. Cité Soleil has some streets, but is mainly an irregular web of narrow alleys. Those who know me will agree that I am not wide. Even so, there were alleys that I could only pass by turning sideways. And they are crooked, winding through puddles and around houses and walls, with intersections popping up at the oddest moments. That’s one reason that gangs can function so well within it. There’s really no way to pursue them. I had some trouble keeping up with Jethro, and he was trying hard not to lose me.

We finally got to his grandmother’s house. It’s a one-room shack made of scraps of wood and roofing. She was there. He had said that she rarely goes anywhere anymore. She had worked for years at what had been a large, mission-run hospital across town. When she retired, they gave her a pension in the form of one lump-sum and occasional smaller payments. The hospital had been taken over by the government, however, the payments had stopped, and I wasn’t exactly clear when she was living from. Nevertheless, she immediately offered us coffee and apologized, saying that if she had known that we were coming there would have been bread for us as well. She was obviously delighted to see Jethro, saying over and over again how worried she had been.

We chatted a little, but Jethro had various people he wanted to see, so he asked me whether I would mind staying with his grandmother for awhile while he wandered. That was fine with me. I was, frankly, tired and glad of the chance to rest. He went off.

This is where things got interesting. His grandmother told me that she was sorry Jethro had come to see her. As lonely as she is without him – she has no one else with her now – she’s just not convinced that he’s safe. I told her how careful he seemed to me to be, and also what Jethro had reported about the gang members’ assurances that he could safely come to visit, but she was not convinced. She pointed to holes in her tin roof, and explained that they were bullet holes. She talked about days spent alone under her bed as shooting went on outside her door. Her story was more frightening and more miserable than anything I hope to ever know. It’s not that she was ever a target. Jethro had often told me that the gangs in Cité Soleil leave old people alone, and his grandmother’s explanation seemed to confirm that. But bullets fly off and do damage they were not supposed to do. My own grandmother passed away only recently, and I struggled as I imagined her at 80 or 90, trying to find a way to hide from heavily armed young men.

The last thing she asked me before Jethro rejoined us was whether he had been going to church. I explained that I couldn’t be sure, that I myself am not home very much, but that I had seen him go a couple of times and that he read his Bible a lot. She seemed satisfied.
When Jethro got back, it was almost time for us to go. We exchanged a few more words, and then promised to return.

Jethro and I talked a lot all the way home, partly about the various people he had spoken to and his impressions of the day, but mainly about his hopes and plans for the future. He doesn’t expect to be staying with me much longer, but when he moves out it will be into an apartment where, he hopes, his grandmother with come to live as well. He’s anxious to find her a place where they will be together and where she will feel truly safe.

Here’s a photo of Jethro in front of his grandmother’s house. 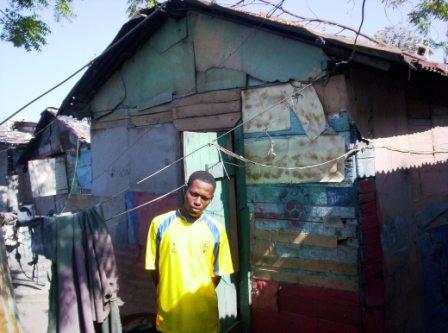