“The Matènwa Community Learning Center” is incomplete as a translation of the name of the school there. The full Creole name is “Lekòl Kominote Matènwa pou Devlopman” or “The Matènwa Community School for Development.” It would make awkward English. Hence the shortening. But the “for Development” is important nonetheless. The school aims to do more that provide strong educational programs for local kids and adults. It is committed to the development of Matènwa, of the island of Lagonav, and even of Haiti.

And those decisions are more than just words. They lead directly to action. Wednesday’s meeting was an example. Fifth and sixth graders from another school in its network, the Baptist School in nearby Gransous, came to Matènwa to watch how the kids at the Matènwa school work in their garden. The teachers in Gransous had already met and had decided to give schoolyard gardening a try. But they felt that, rather than just making their students take on the project they would seek their agreement, and the first step they chose was to bring them to Matènwa to observe.

Though the lions share of the gardening at the Matènwa school is done by the children, there is nevertheless plenty of work to go around. The school’s principal, Abner Sauveur, is also the head gardener, and he prepares for the Gransous visit: 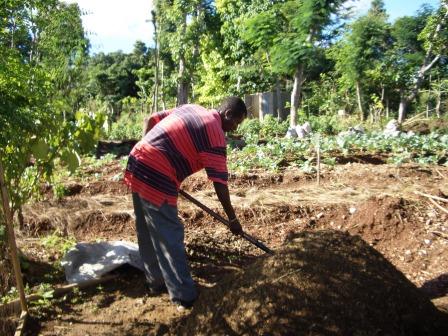 Here the students arrive, two full classes from each school: 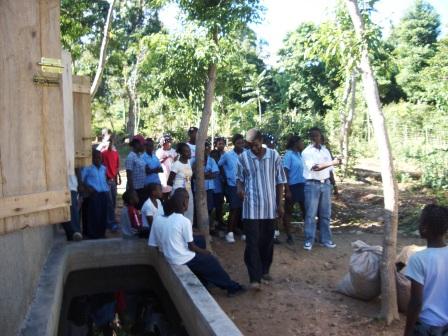 The first thing that caught their interest was the school’s large fish tank. It’s filled with tilapia, a fish that survives well in a closed tank with only minimum attention. The tanks water becomes an extra source of plant nutrients when it’s used to water the soil. 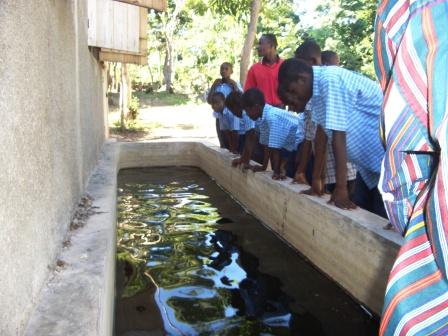 Abner begins by talking to the students about the different tasks they have to accomplish: 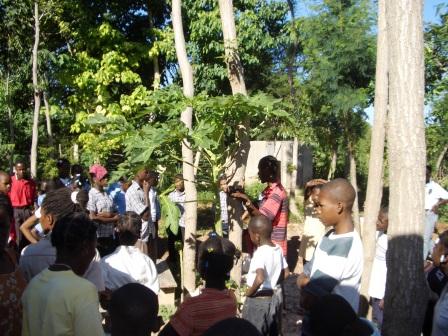 Here, the kids from Gransous are listening in. They wore uniforms for the visit, but the Gransous school has imitated the one in Matènwa in its decision not to require uniforms any longer. One sees here that, even when the kids wear uniforms, they don’t pay too much attention to whether their uniforms are all alike. 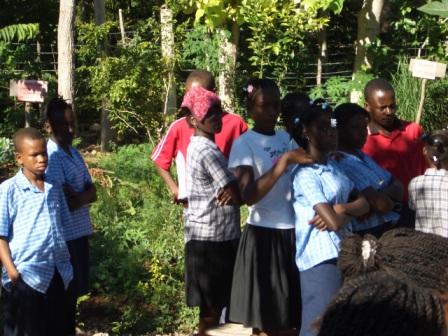 One of the tasks for the day was to fill small black bags with soil enriched with donkey dung. 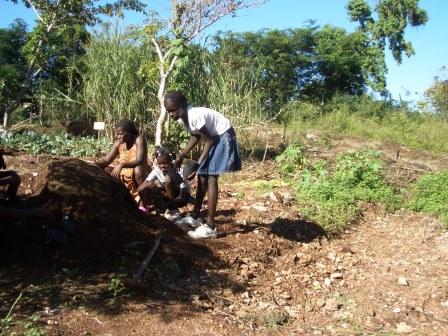 The bags are used to plant tree seedlings, one of the garden’ most important products in an area whose trees have been decimated by years of charcoal production. The bags are lined up outside of direct sunlight. They’re ready to be part of the school’s nursery. 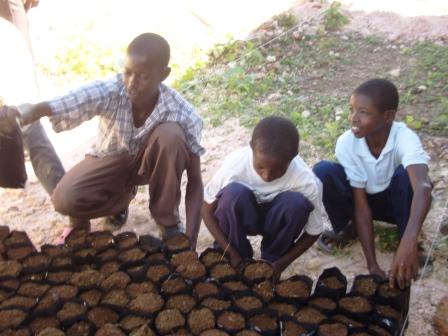 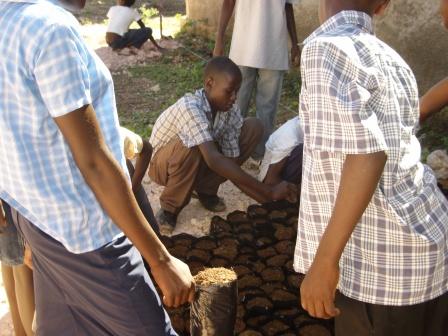 Meanwhile, another group of students is preparing a bed for planting. The beds are shaped out of enriched soil. 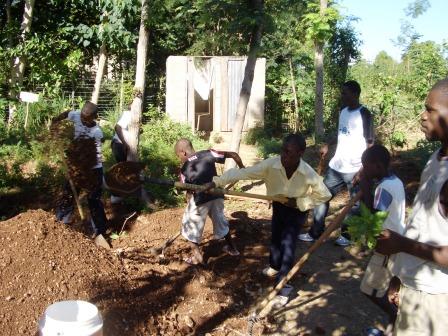 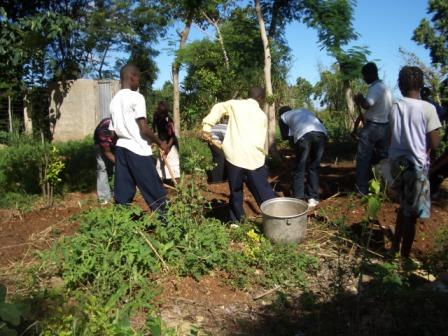 One of the school’s teaching interns lends a hand. 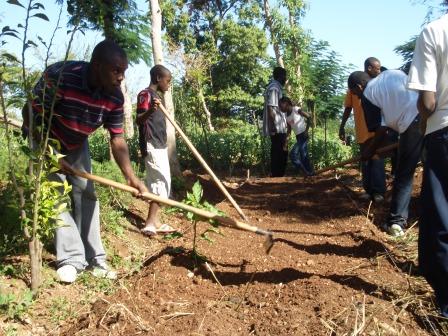 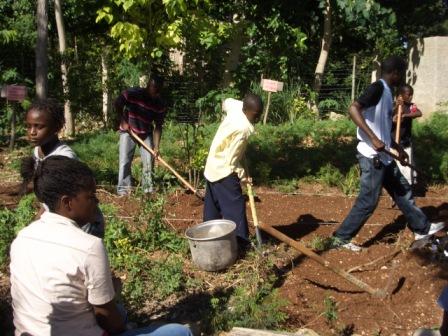 Boys and girls participate as equals in all part of the garden work. 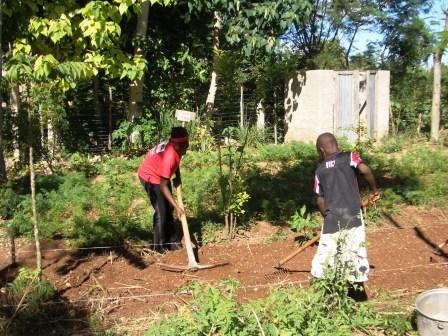 A number of the students were sent into the cabbage patch to remove snails that can ravage their crop. Simple measures like this eliminate any need for insecticides, which would be expensive and dangerous. 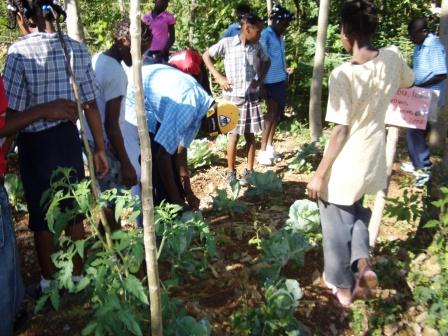 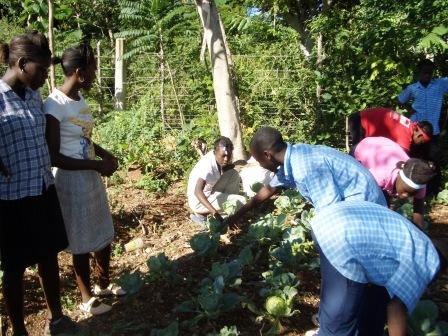 A couple of students water. 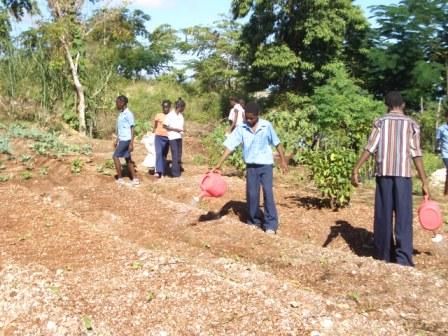 The students from Gransous had been brought to observe the work, but as is clear from all the photo, that plan didn’t last. They wanted to be part of the work and, so, joined right in.

Before they left, they all met together to discuss the experience. Such closing conversations are always part of the work Abner does in the garden with his own students, but on the day of the visit the group was especially large: over sixty kids and their teachers sitting is as much of a circle as they could. 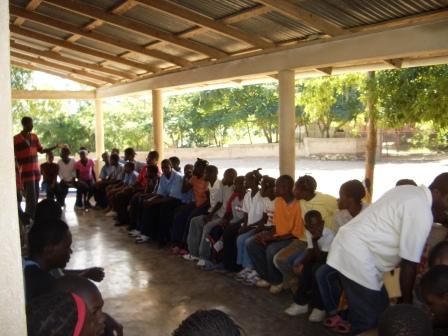 The kids from Gransous had lots of questions about the advantages of gardening at the school and the resources they’d need to get started. 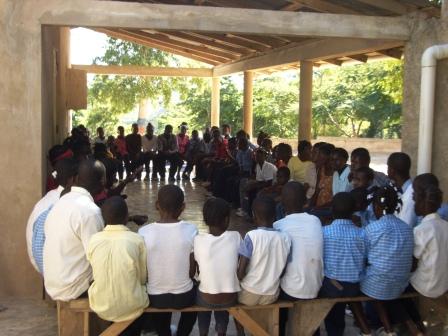 Most of the answers came from the Matènwa kids themselves. 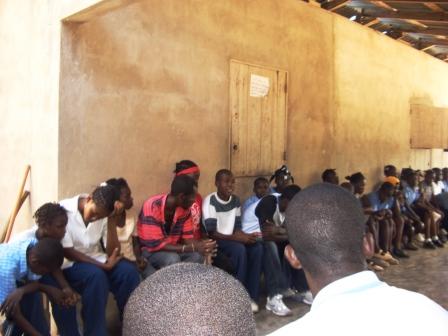 Abner said a few words at the end, but they were mostly words of thanks — both to his own students and to his guests: 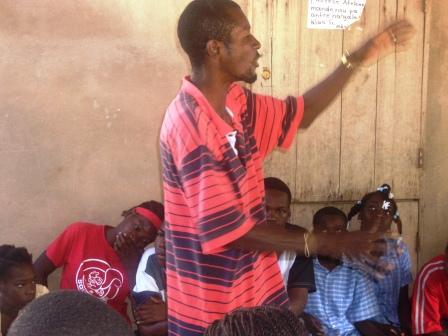