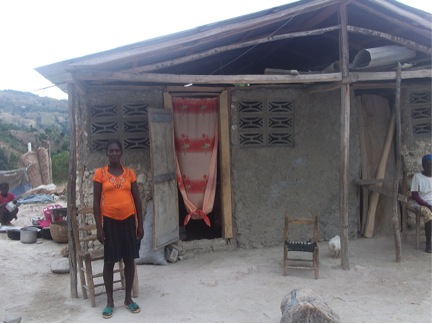 Mecianie Casseus is a forty-seven-year-old mother of ten. She has children with four different fathers. Two of the fathers are dead, and one of them doesn’t care about his children. She only has one kid with the man she is living with right now.

Before joining the program, she said that her life was upside down. The earthquake destroyed the straw house that she had been living in. She was lucky enough to receive a tent from Concern worldwide, so she could shelter her family. She had no land and no productive assets. The most she had was a little goat someone gave to her to look after. 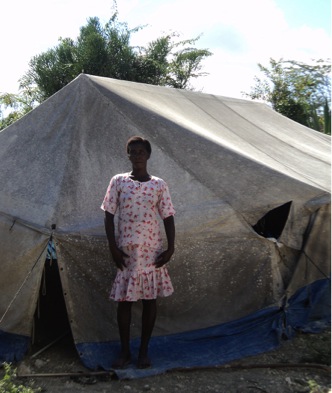 She caught a break when one of her older daughters married a guy who took her to live in a small town outside the capital. The daughter agreed to take five of her other children with her, leaving the mother with only the four younger ones to take care of. Even after that, things were still very difficult. She got by going to the market for her better-off neighbors. In return, they would give her loose change, which she would use to buy food for her children. At other times, she would travel to a nearby town to wash clothes for people. She said that she would find money in their pockets, and would return it, so they came to trust her. Because of that trust, they would also take her to sell plantain with them. They would let her gather the loose ones, and she would sell them to take something home to her family.

She explained that after she was selected for the CLM program, she went and told her older daughter because she couldn’t believe it. It seemed too good to be true. Her daughter told her to give her name instead of her own just in case it was something cursed, that would kill her. The daughter would then die in her mother’s place, and the mother would be left to care for the other kids. She used the name Assedie Simonise.

It took her six months for her to realize that the CLM program is truly there to help her, and that she has nothing to fear. That is when she told us her real name, Mecianie Casséus. That is also when we started teaching her how to write her own name, because she had been learning how to write her daughter’s name before.

She explained that things were so bad that when her oldest daughter was younger, the girl had only one little dress. Whenever it was dirty, she would take her to the river, and while the girl was bathing, she would wash the little dress and open it to the sun, waiting for it to dry before they would go back home.

“My life has changed since I joined CLM. I remember the first training days when I received 75 gourdes a day for 6 days. I used that money to buy some clothes, because I didn’t really have any, and a chicken. What was left, I used it to buy food for the kids.”

She said that the program has done so much for her. At asset transfer, she received two goats and a pig. She now has five goats, two pigs, a horse, a cow, few turkeys and some chickens. She said that her husband didn’t contribute much to the house before CLM. He had other women and he wasted the little money he made as a day laborer on them. Now he is working together with me to help the family build a good asset base. She mentioned that as a matter of fact, he is the one encouraging her not to waste but to save. 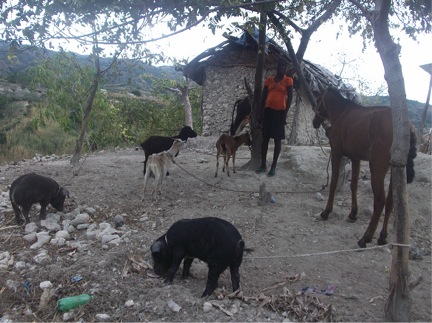 Mecianie is proud of what she is accomplishing, “I am no longer the person I was before CLM.”