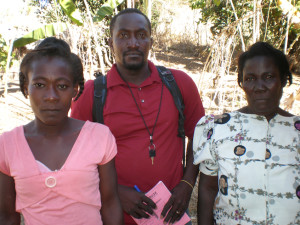 Michaël and Heleine with their case manager, Mahotière

Michaël and Heleine live within a few feet of each other in Domon, a remote village far off the main road in southeastern Mirebalais. They joined CLM together three months ago, as part of a group of 150 women. Both were struggling to support their families when they joined the program. They would take the long walk into Mirebalais, and spend a long day doing laundry by hand for wealthier families. They might earn two dollars in a day, once or twice a week, but the work was irregular, and the women who hired them would treat them poorly.

Michaël is a young mother of three. She was excited when she learned that she qualified for the CLM program. “I had lots of problems. I wanted to sent my two older children to school but I didn’t have the money”

But to succeed in the program, she would need to solve one problem first. The problem was her husband. “He never wanted me to participate in anything that outsiders do where we live. When Mercy Corps and World Vision gave away stuff in Domon, he wouldn’t let me take any of it.”

So Michaël took a chance. She joined the program without telling him. She sneaked to her six days of enterprise training and to the launching ceremony, and she managed to start receiving her weekly visits from her case manager, Mahotière, without tipping her husband off. She chose goats and a pig as her two enterprises. “I hid the animals back away from the house.”

But her husband was bound to find out eventually, and when he did he was very angry. Mahotière got a call from a crying Michaël one evening, telling him that he’d have to come by the next day to take back her animals. Her husband was making her drop out of the program. So Mahotière called a member of the local Village Assistance Committee, and asked him to go over and collect the animals right away. He didn’t want to take the chance that the husband’s anger would bring the animals to harm.

The next day, he went to talk to the man. He took the committee member with him. They spent some time with the guy, who was initially hostile but was willing to listen because of the committee member’s presence. Mahotière was friendly, but very frank. “I told him that his wife and children were living very badly, and that I was there to help him change that. I told him that if he didn’t want outside help he should say how he was going to send his kids to school.” It took some time, but eventually the man came around.

Now Michaël is starting to move forward. The progress she is proudest of is her small commerce.

She didn’t get it started with merchandise we gave her. Instead, she started it with money from her sòl. A sòl is a traditional Haitian kind of savings club. Its members make a set daily, weekly, or monthly contribution, and one member then gets the whole pot. CLM case managers help members organize the clubs as a way to help them learn financial planning. Michaël took 1250 gourds of her sòl money when her turn came, and invested it in the kinds of things she could sell right out of her home: rice, cooking oil, laundry soap, etc.

And her business has taken off. She has 1500 gourds in it now, even though she has been using profit to keep her children fed.

Her neighbor, Heleine, has been having a harder time of it, and it is easy to understand why. Her life has been difficult for a very long time. “Before I joined CLM,” Heleine says, “I couldn’t even feed my kids. I couldn’t always send them to school.”

She has had twenty. “I had them by twos and threes.” She’s had three sets of twins, and two sets of triplets. Only five of her twenty children survive. She now lives with her two youngest boys and two grandchildren who were left to her when their mother, who was her daughter, died. “I’m the only mother those little girls know.”

Heleine is raising the children by herself. She’s never had a steady husband. “When you’re living in real misery,” she explains, “you have children with the husbands of other women.”

She’s committed to taking good care of her CLM livestock. “Sunrise doesn’t find me in bed. I get up early to make sure the pig has food and the goats are tied somewhere where they can graze.”

But though she too started a small commerce with sòl money, she hasn’t had Michaël’s success. One of her boys is supposed to take the national primary school graduation exam this year. He finally made it to sixth grade. But his teacher sent him home from school because Heleine hadn’t been able to buy him the books he needs. So she felt she had no choice. She sold out her merchandise, and used the money to buy books. Her commerce disappeared.

She lost 1000 gourds. Though both women received 1500 gourds from the sòl, Mahotière encouraged Heleine to put 500 gourds in the bank. Michaël deposited only 250. That might not seem like a big difference. It’s less than $6. But 500 is easily enough to start a very small business. With only 250, it would be much harder.

Mahotière is clear about his reasons for advising the two women differently. He didn’t think that Heleine was ready to make the sacrifices she would need to make for a business to succeed. So he let her take a chance, but had her keep something in reserve so she’d be able to make a second attempt. If it was up to her, she would be trying again already, but Mahotière wants to take things slowly. “I don’t want to authorize her to withdraw her money until I think she understands what small commerce requires.”

With only three months in the program, it is hard to get either woman to look to the future. Women living in extreme poverty tend to struggle so much with day-to-day issues that they don’t articulate their ambitions. When I asked them what they would like to achieve while they are in the program, they both said that they want to do what Mahotière decides.

But Heleine is a older woman. I told her that I know that young people fall asleep quickly, but that the older you get the more you lie awake, thinking. I asked her to tell me what she dreams of when she lies awake. She smiled. She knew about lying awake. Then she gave me a simple answer. “I don’t want to do laundry for other women any more.”

She wants to feed and educate her children. But more than anything, she just wants an end to the indignities she suffers as she lives the only life she has known.