Women end up in extreme poverty for a variety of reasons. Some suffer catastrophic expenses – often an illness or a death in the family – that send them spiraling backward. Some become responsible for a household before they are ready, whether through rape, seduction, or simply an imprudent decision. They just have no capacity to manage a home. Some have too many children too quickly, and so their families become too large for the means they have to support them with. 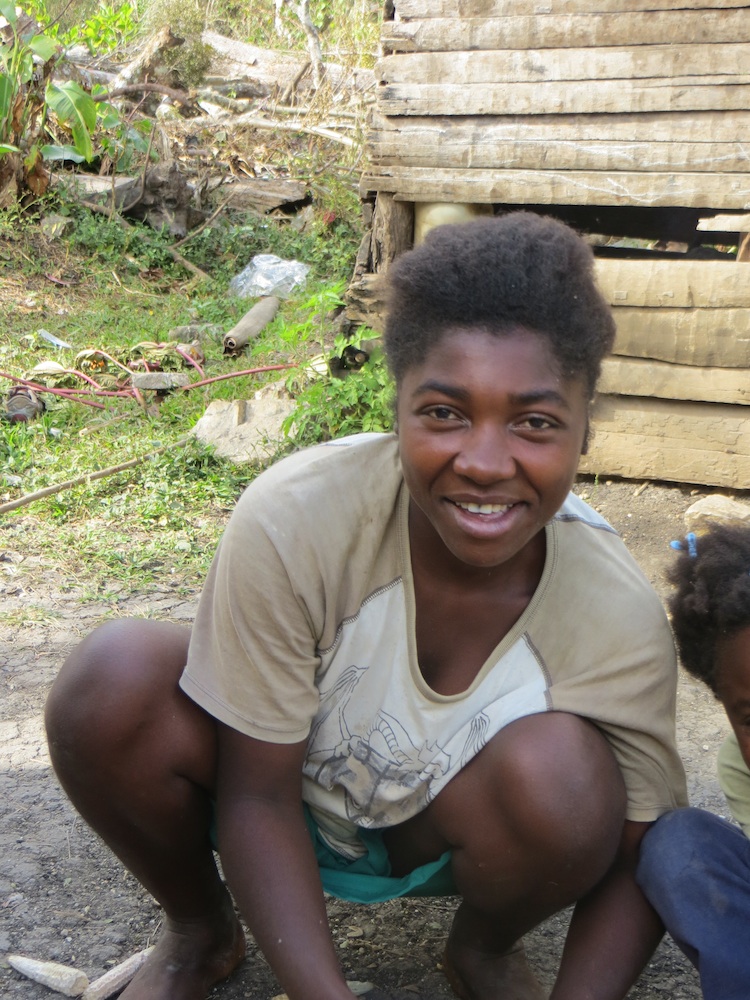 Orana and her husband, Sòn, live with their five children in Fonpyejak, a hilly neighborhood on the outskirts of the central village of Bay Tourib. When we first met them, they were struggling to get by with farming. They had no assets to speak of except their land – just two chickens – and had very little money to invest in crops. They didn’t have a home of their own. The seven of them were living in a small house that belonged to one of Sòn’s brothers.

Their main sources of income were working in their neighbor’s fields and the little they could realize from the sale of bean crops that depended on beans they would borrow from a local peasant organization. Sòn would go to the Dominican Republic now and again to work for a few months, and when he returned to Haiti, he’d try to come with some extra money. Orana would then use it to buy plastic sandals in Tomond, which she’d then sell in the rural markets around Bay Tourib. Each time she would restart her business it would work for a while, but eventually collapse. Often the problem was pregnancy. She’d be unable to sell for a few months, and would feed her children with the money in the business until it disappeared. They were hungry most of the time.

When Orana joined CLM, she chose goats and small commerce as her two assets. She wanted commerce because she liked the possibilities it offered, even though her previous success had been very mixed.

At first she struggled. Her goats didn’t do very well. Of the three that we gave her, two died within a couple of months. The third eventually gave her two kids, which she was able to sell to make another investment. But if it had just been for her goats, she would still be very, very poor.

What really helped her was her commerce. Once she joined the program, it took off. Her success is mainly rooted in her willingness to work hard, to work smartly, and to work in concert with her husband, but her membership in CLM has been a big help as well. First, she received 1500 gourds of start-up capital. That’s almost $40. Second, she received six months of weekly cash stipends that helped her keep her family fed between crops so that she could leave her capital in her business. Third, she and Sòn received coaching that helped them connect the dots between her frequent pregnancies and their poverty. As a consequence, they made a commitment to family planning that allows her to focus on the kids she already has.

Her business really took off. She began sending Sòn to do her purchasing in Port au Prince, where she can buy more varied and less expensive merchandise. By buying well, and turning over her inventory regularly, she was able to set aside almost enough money to buy a mule. She just had to add proceeds from the sale of her goat’s first two kids to accumulate the 12,000 gourds she needed.

Buying the mule, in turn, made a big difference because it meant that she was no longer limited to the amount of merchandise she was able to carry on her head for the hour and a half it takes to get to Regalis or Zabriko, two of the three markets she’d sell in every week. In addition, it opened up a secondary business that eventually became very important to her: She would buy mule-loads of produce in Bay Tourib, and carry them to market in Tomond, a five-six hour hike away.

Then something happened which might have seemed like a disaster. On a trip to Port au Prince, Sòn lost 3500 gourds. He doesn’t know what happened to the money.

But it wasn’t a disaster. Orana just moved on. “I still have some sandals to sell. And I have a load of corn and beans to bring to market. Once I get that sold, I should have enough money to send Sòn to buy again. It was a big loss, but we’ll manage.”

Her well-considered sense that she and Sòn will manage, despite the loss, is a major victory for them. They have succeeded not just in building a better life, with children in school and eating well every day, but they have established a resiliency in the face of misfortune.

There will be bumps in their road forward. But Orana and Sòn have proven that they can face and overcome a pretty large one.