When we arrived at Jezimèn’s home, she was finishing some ironing. A large wooden case was open on her front porch. It was filled with snacks – crackers, lollipops, and cookies – that she was selling. She put away the shirt she had finished, and welcomed Judith and me. She had been expecting us. Judith had called her to let her know we’d be stopping by, and she had arranged three comfortable chairs in a shady corner of the same porch.

Jezimèn lives in a neighborhood of Peredò, a coastal town east of Jacmel, the main city in the Haitian southeast. Earlier in the day, I had arrived at the nearby Fonkoze office in Marigò after a long morning’s travel and work. I had begun the day at home, then spent the morning interviewing Fonkoze members in Lavale, an area served by a very large branch in the mountains outside of Jacmel. I then hurried over to Marigò to conduct more interviews, hoping to be able to get back to Port au Prince that same day.

Judith is Fonkoze’s education coordinator at the Marigò branch, and she was coordinating the Marigò part of my day. I do field interviews now and again, in part because Fonkoze’s major funders insist upon it. Fonkoze will eventually be able to pay for education programs through the revenues its various programs generate. But it isn’t there yet. For now, the programs are financed through grants we submit to a range of organizations. We send those organizations reports about how their funds were spent, with lots of financial data and information on the number of participants that their funds reached and the programs those participants were offered.

The funders, however, want and need more. They like to have profiles of participants. They want to hear about the programs from the participants themselves. They can use such profiles to gain a richer sense of the effect the education programs have. Participants speak eloquently of the importance they attach to them. One hears all sorts of powerful testimonials:

“Before I started with Fonkoze, if I said ‘A’ it was because an insect bit me. Now I can sign my name to receive new credit. I don’t have to leave meetings with a ink stain on my thumb.”

“I’m not ashamed to attend parents’ meetings at my child’s school anymore because I can sign the attendance sheet just like everyone else.”

“I thought I knew how to run my business, but Fonkoze taught me that I didn’t even know whether I was making or losing money. Now I keep track of all my income and all my expenses.”

And the funders can then pass on the profiles, and the lessons they learn from them, to their supporters and funders. After all, the organizations that finance Fonkoze don’t print their own money. They have to find it somewhere as well. Good participant profiles can strengthen a case for support.

The organization looking for stories from Marigò is a particularly strong Fonkoze partner named Plan International. Plan is an NGO devoted to combating the various effects that poverty has on the young. It became interested in microfinance when it concluded that one good way to help the young is to help their mothers earn the money they need to care for them.

Its microfinance partner in Haiti is Fonkoze. Plan provided the start-up costs for the branch in Marigò – and has funded other branches as well – it provides a couple of hundred thousand dollars each year to the education unit, and it has underwritten, almost single-handedly thus far, Fonkoze’s research and evaluation unit, called “Social Performance Management.” So assuring the Plan gets the information it needs is a priority for Fonkoze.

Jezimèn has a business that depends on its location in the southeast. The little business I saw on her front porch is just a little aside. One of her adult daughters keeps a one-room house in Ansapit, a Haitian port on the Dominican border with a large bi-national market. It’s an overnight trip, by sailboat, from Marigò. Jezimèn buys things in Jacmel that she can sell in Ansapit, and brings them to her daughter, who does the selling. She also takes merchandise that her daughter buys at the market in Ansapit, and brings it back to Marigò and Jacmel.

When she found out that Fonkoze would offer literacy classes in her credit center, she was excited. Her mother had tried to send her to school, but in her first year one of her classmates had become pregnant. Her father blamed the school, and when her mother insisted that she continue to go, the father gave them each a beating and threw them out. They eventually moved in with her mother’s older sister, but the two women had no way to send Jezimèn to school. Thanks to a couple of months in her Fonkoze literacy program, she can now sign her name, and looks forward to learning more. She wants to take advantage of any opportunity her credit center might offer.

I asked Jezimèn how long she’s been with Fonkoze. “I would have about four or five years, but I took some time off after my son died. It was about seven months. I just didn’t want to do anything.” 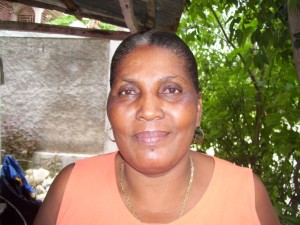 Judith and I asked her about the boy. It turns out he wasn’t a boy at all, but a 22-year-old young man, in his second-to-last year of school. He was ready to take the rhéto exam, a national entrance examination for the final year of school, when he died in a car accident.

“He was a really big kid,” Jezimèn said.

“Yes. Just look at his shirt.” She pulled out the last shirt she had been ironing when we arrived, a very large short-sleeved shirt with a colorful floral print. “Whenever I miss him, I take out his clothes and iron them.”

She has five other children, the youngest a teenage girl who’s still with her. Fonkoze helps her ensure that she has a way to support them. Plan’s partnership with Fonkoze means that she gets not only credit to help her business grow, but also educational programs that she wants and needs.