Pwent Latanye is a village of about 2000 on the northwestern coast of Lagonav. Here’s a photo of a sunset there: 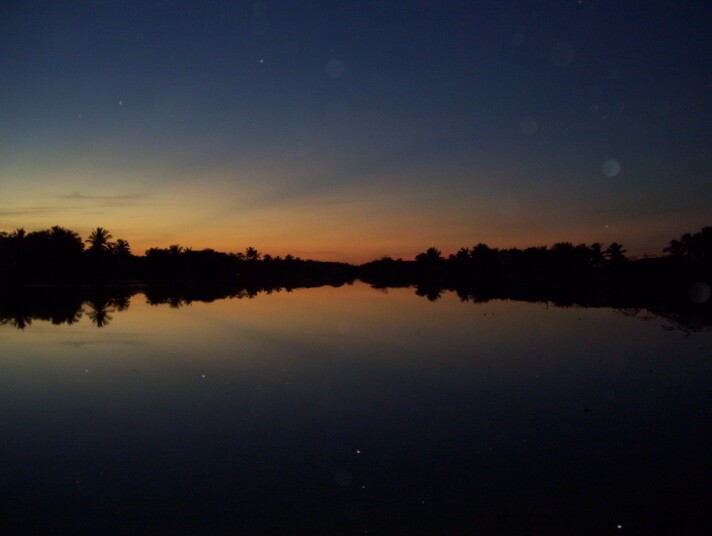 It’s a beautiful scene, but it hides an ugly, dangerous truth. The water in this picture is not the bay the island of Lagonav rests in, but standing, salty rainwater that collects in large low-lying spots throughout the town. The water can be more than a foot deep, and it’s a perfect breeding ground for the mosquitoes that carry malaria and other diseases. The lack of outhouses in the village ensures that standing water means other health problems as well. The water is not the only problem that the community faces, but it’s a big one.

This year, however, there’s a new group in the community working to address them. It’s an adult literacy center, and I visited it last week.

Just getting to Latanye is a nuisance. Here is some footage of the trip from Matènwa, in the mountains in the middle of the island, to Latanye, on Lagonav’s western tip.

It’s fun to see flocks of flamingoes along the way. 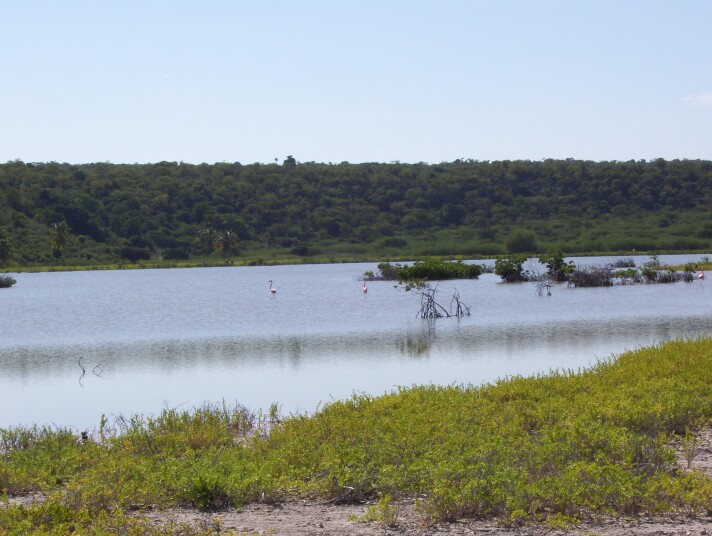 Here are some views of the town. 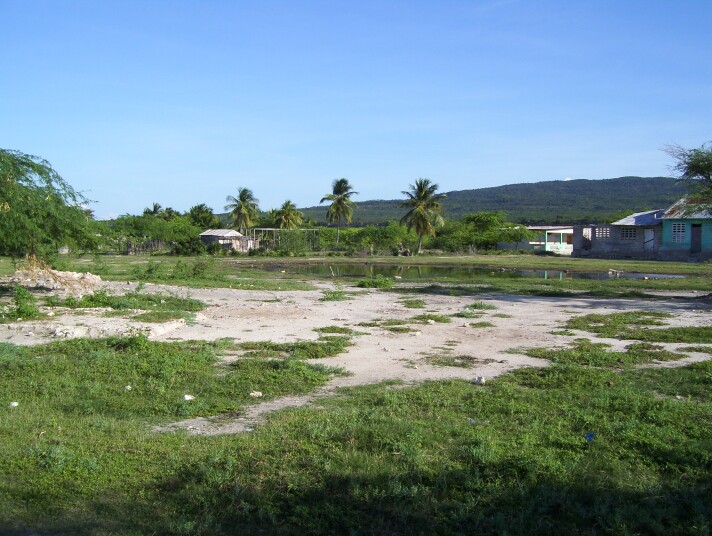 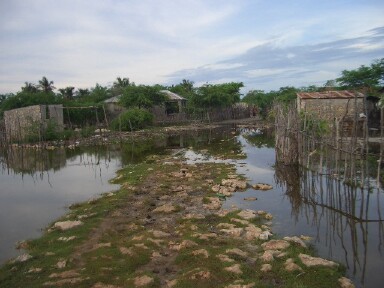 The group has been meeting since September. I had attended an organizational meeting, but had not been back since.

The objective that the center’s organizers originally set was to see whether they could establish a literacy center that would do much more than teach participants to read and write. We wanted to help them take on the very serious problems their community faces. The method they have been using depends on participants’ working together to create graphic representations of their knowledge.

That’s a complicated way to say something simple: They create a picture that organizes what they know in a manner that helps them confront it. For example, they made a map of their community with everyone’s home on it. They then marked next to each home the number of school age children in it who are not in school. To their surprise, they counted 40 such kids.

They then sent teams to talk to all the kids’ parents. Some of them just needed to be encouraged to see the importance of school. Some needed a couple of gourds for books or shoes or uniforms. A few of the kids were needy enough that no small amount of money would have enabled them to go.

So the participants encouraged and cajoled, but they also reached into their own pockets, providing up to 100% of the money their neighbors needed to send their kids to school. 38 of the children are now attending one of the town’s two schools.

Another discussion concerned the way standing water was making it hard to get around in the community. So they set aside a couple of days, and brought rocks down from the hills outside of town to create paths. They pitched in to buy a couple of sacks, and got a local organization to volunteer money for more.

Here they are working together: 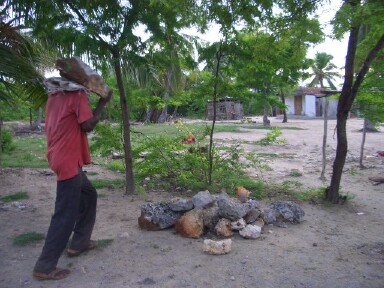 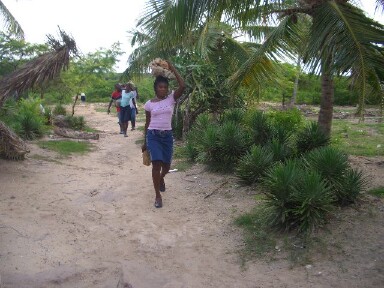 They expect to get the cement they need in the next few weeks.

The day I visited, they were working on a graph showing the prevalence of sickness in the community by month. Robert Cajuste, a teacher from Matènwa who visited with me, led the activity.

First, the drew a month-by-month grid on the blackboard. The months are represented by letters drawn across the top. A different participant drew each letter. 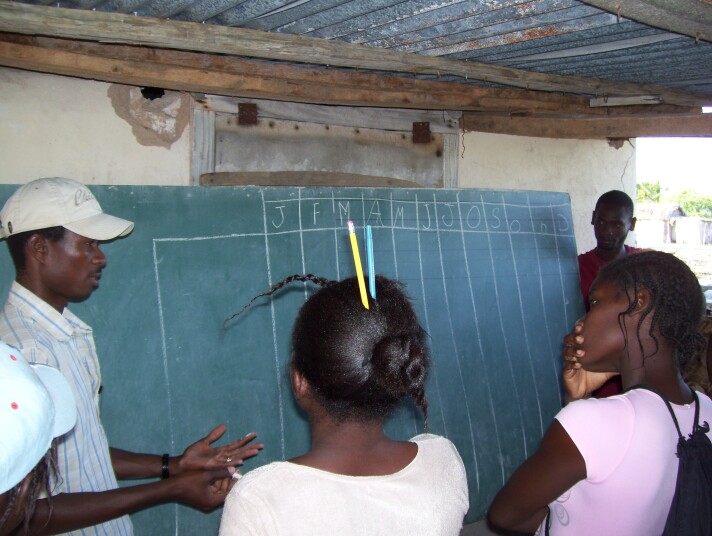 Then, they added pictures on the left hand side. Each picture represent a disease that’s common in Latanye. The top one, for example, is a man holding his head. He has a headache. It’s the symbol they chose for fevers. 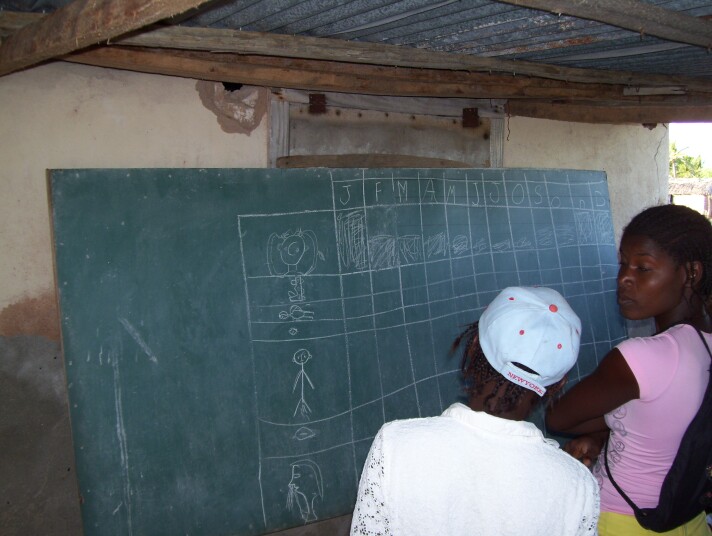 They really enjoyed the work. 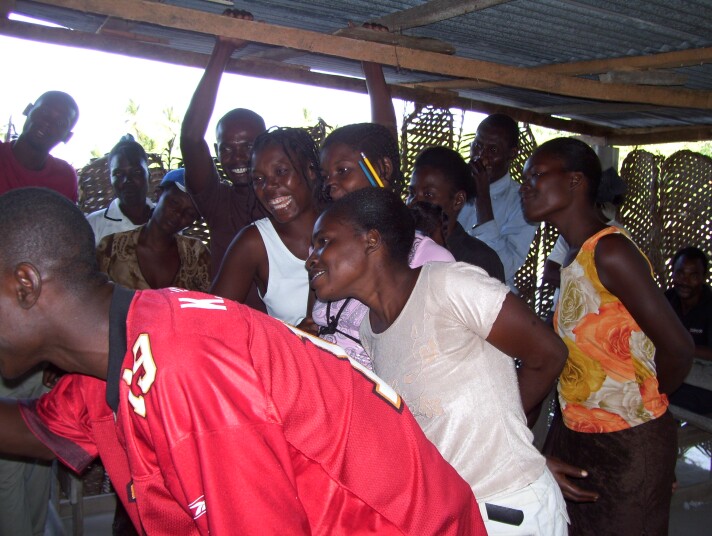 Here, the calendar is complete: 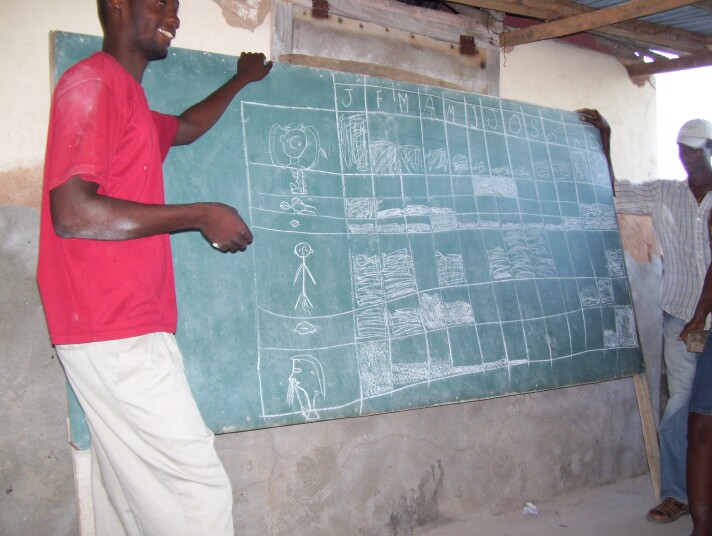 They then worked together to transfer the chart onto paper. They’ll be able to study it in the upcoming weeks to see whether there are things it helps them explain. 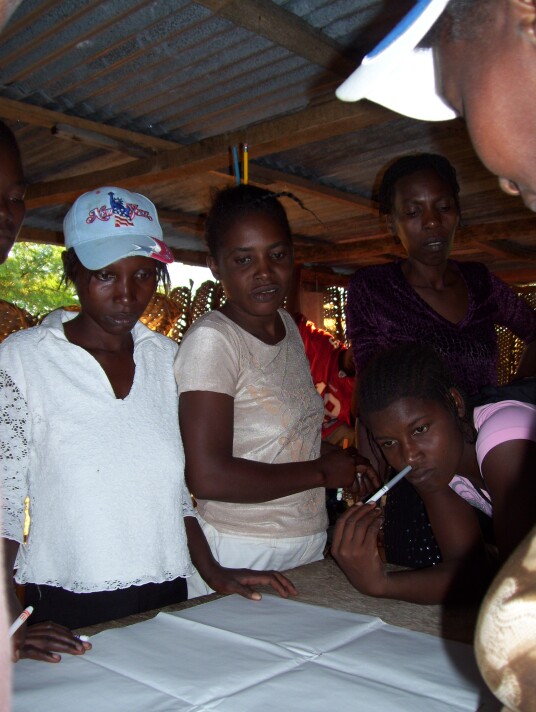 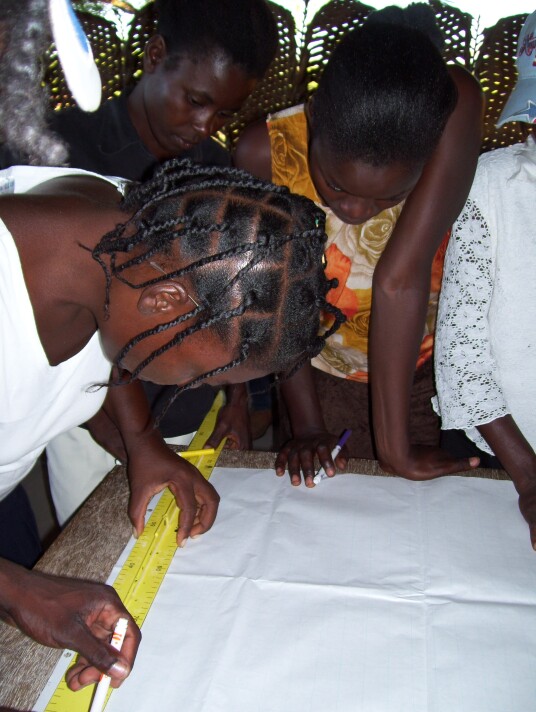 While there’s no guarantee that the process will suggest the solutions they’re searching for, it will bring them together to reflect seriously on their world.

And they enjoy it.