One difference between what is generally called “liberal” education in the States and what is often called “popular” education around the world is the way that latter aims quite explicitly at changing the world we live in.

I recently wrote about one group of students – literacy students in Pwent Latanye, Lagonav – who are taking a firm grip on the future of their community. (See: Pointedes Lataniers.) After spending last Thursday with them, I rushed back to Matènwa to spend the day with the Matènwa Community Learning Center, a whole school devoted to the development of the village it’s in.

Then I left early Saturday morning for Port au Prince – specifically, Cité Soleil – to work with another group. I’ve written about them often enough. They are IDEAL, a youth group in Belekou, one of Cité Soleil’s 34 neighborhoods.

They have increasingly sought to expand their vision from one that looks to their own advancement to one that looks towards community change. They are planning a couple of projects, but one important idea they had required very little planning, just a decision to start. They decided to start giving their street a regular cleaning, sweeping away the dust, clearing away the trash, and draining the standing water. They chose a recent Saturday morning to get started, and have been working every Saturday ever since.

The first step is to give the road a good sweeping. The first photo is Daniel with a broom. The second is Diomson. 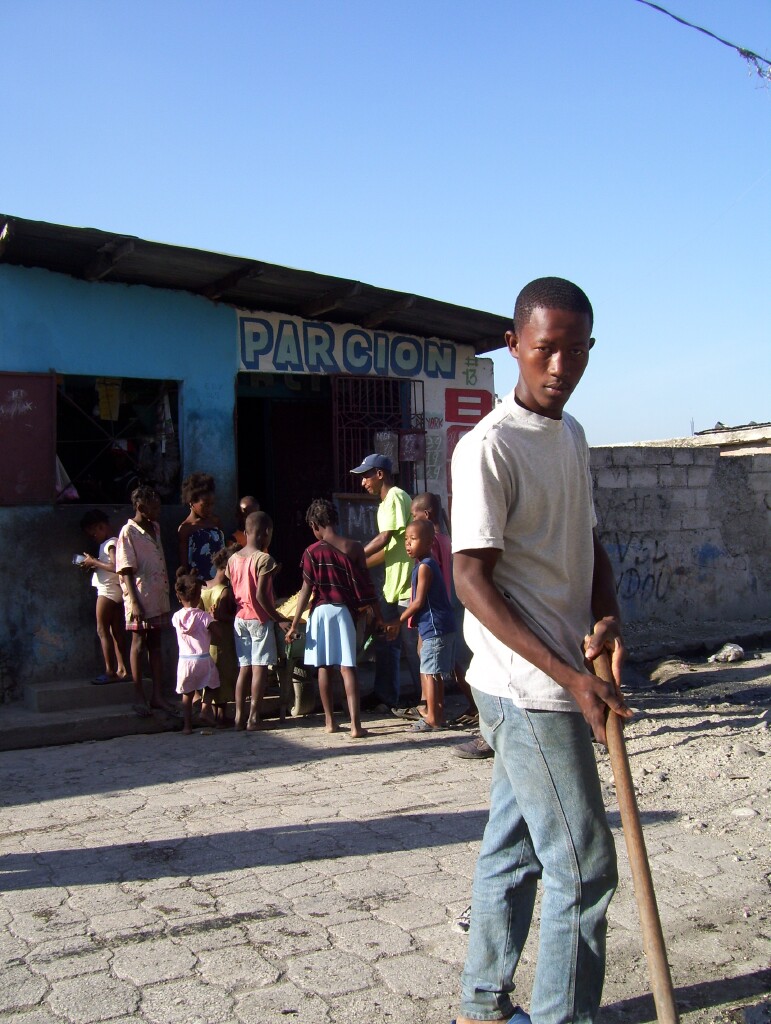 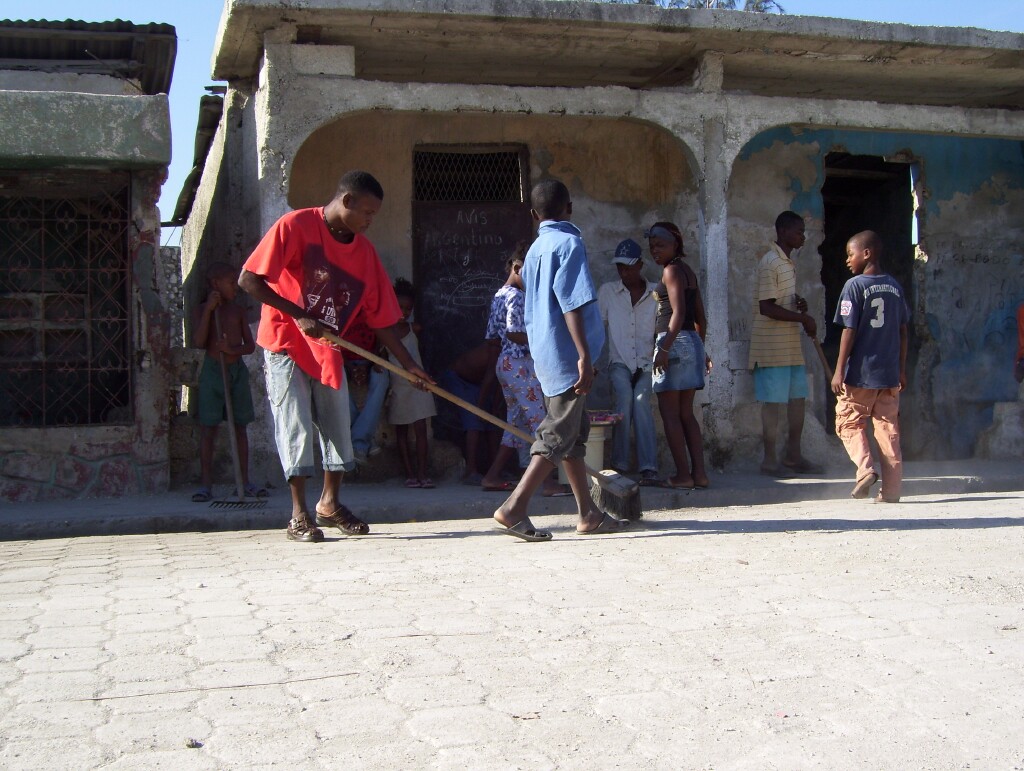 Then, they take shovels and remove the trash, paying particular attention to the gutters. 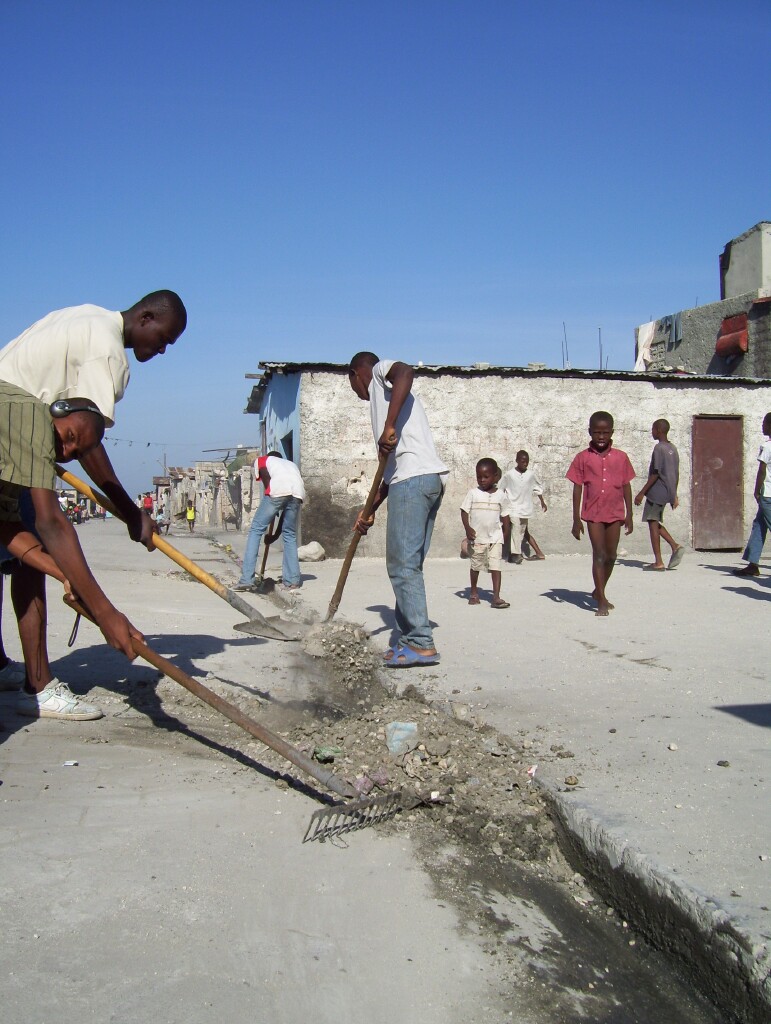 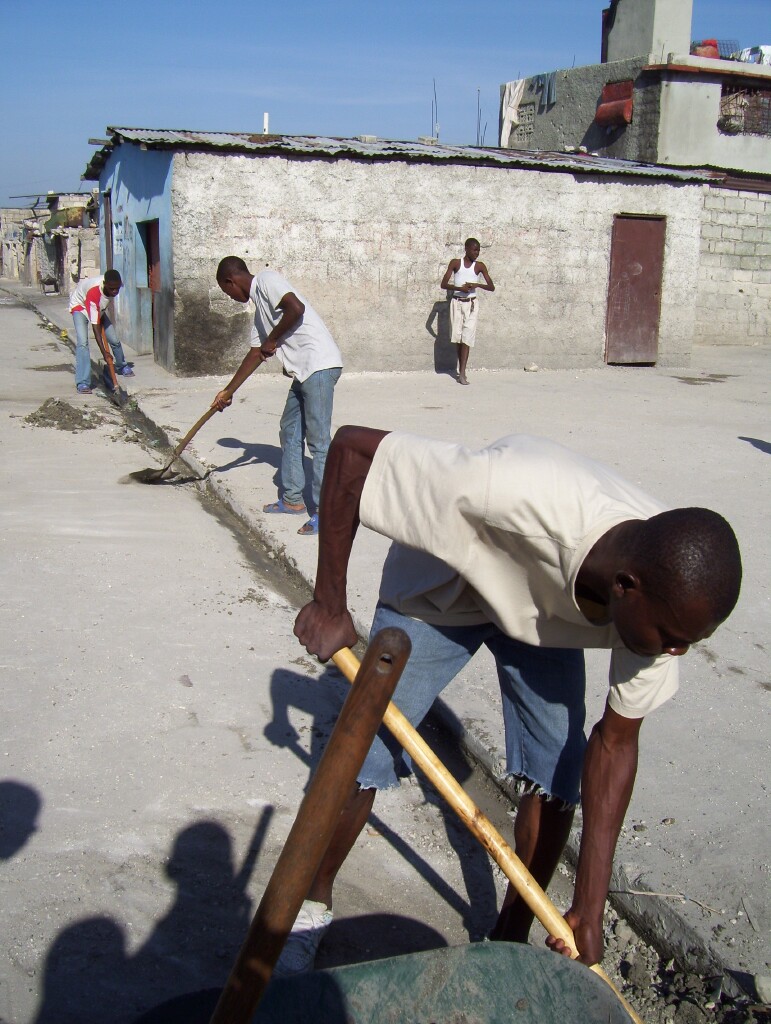 Then, they cart off the trash. 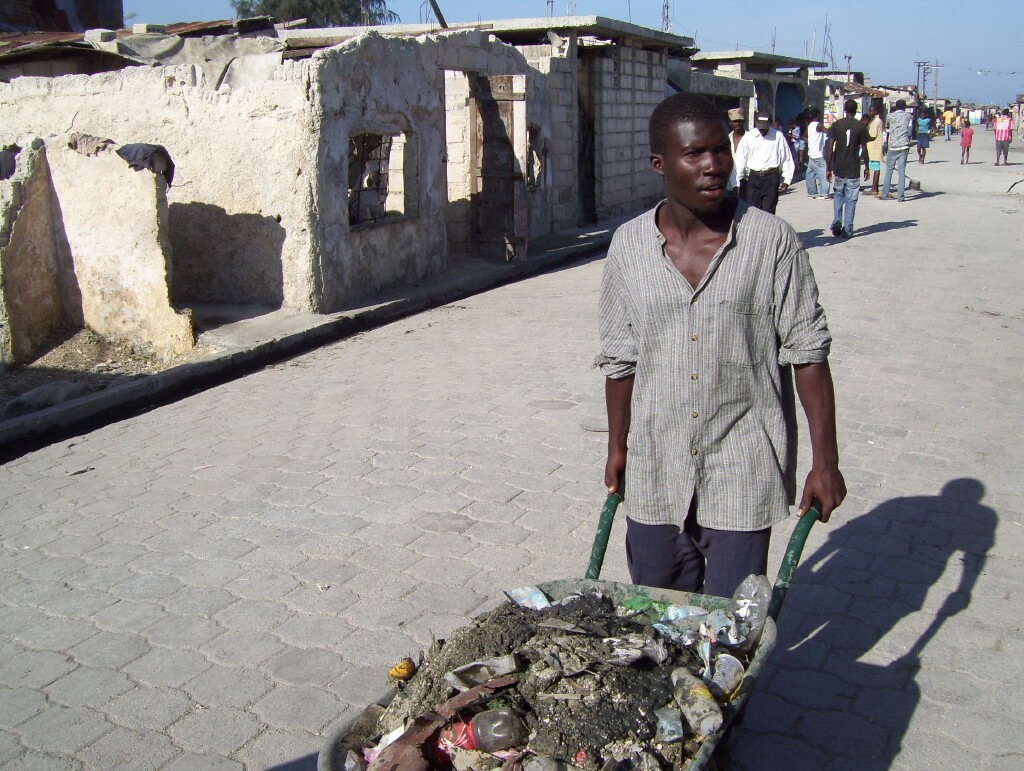 One of the interesting first consequences of the project has been that younger boys have joined them. They want to feel as though they are part of a group of older guys. 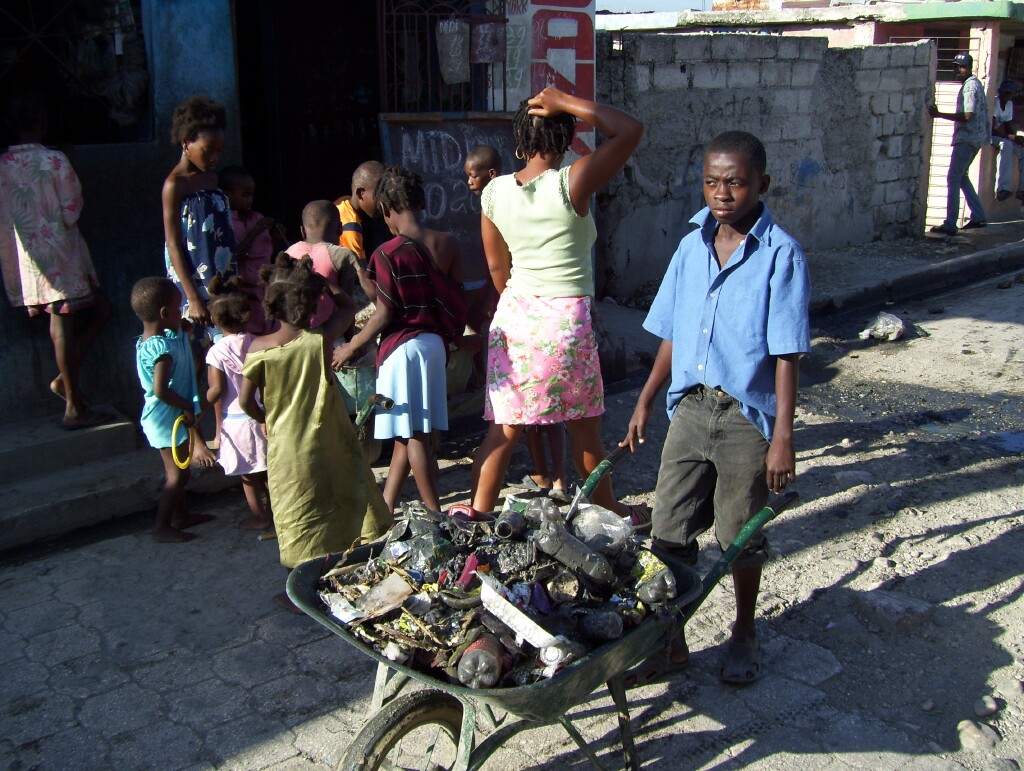 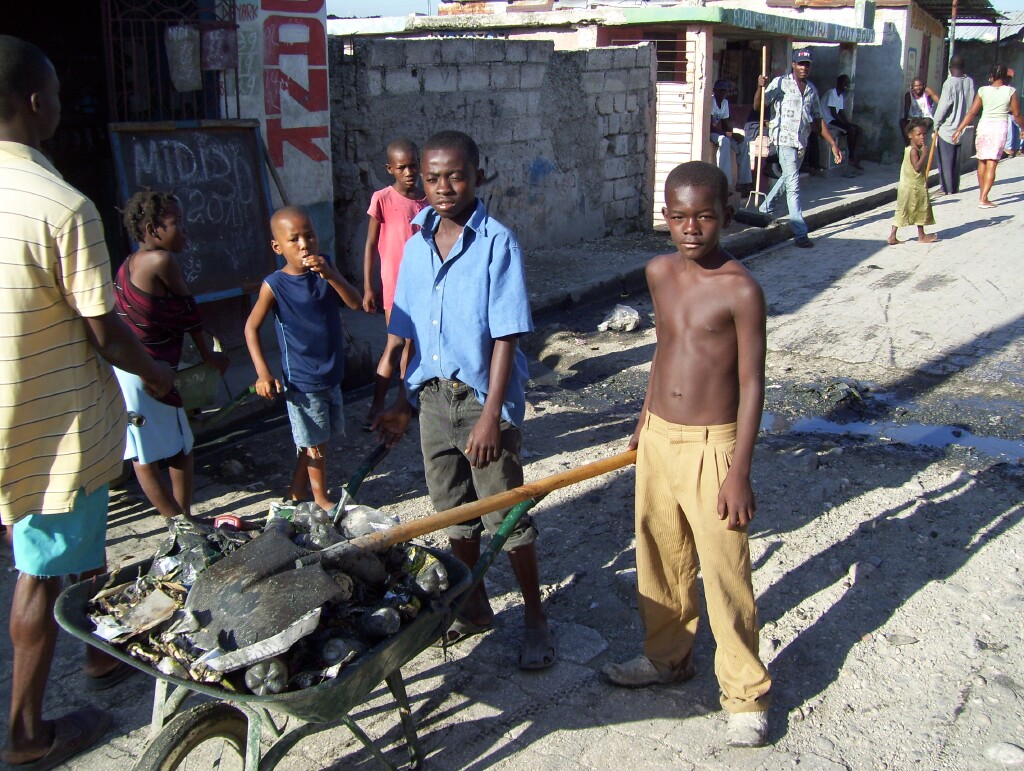 Perhaps the most important part of the work is removing the standing water. I write “water”, but that’s not the right word. The dirt, dust, oil, and grime that gets into it would be bad enough, but few residences in Belekou have toilets or outhouses or anything of the sort. So the bubbling ooze that circulates through the gutters is a rich source of more than just mosquitoes, more than just of an ugly, piercing stench. It’s also a source of a wide range of disease-carrying agents. Trying to clear it out of the streets as best they can is a big job for the guys. It’s too big, in fact, because what is really needed is some sort of sewage system. The guys just do what they can. 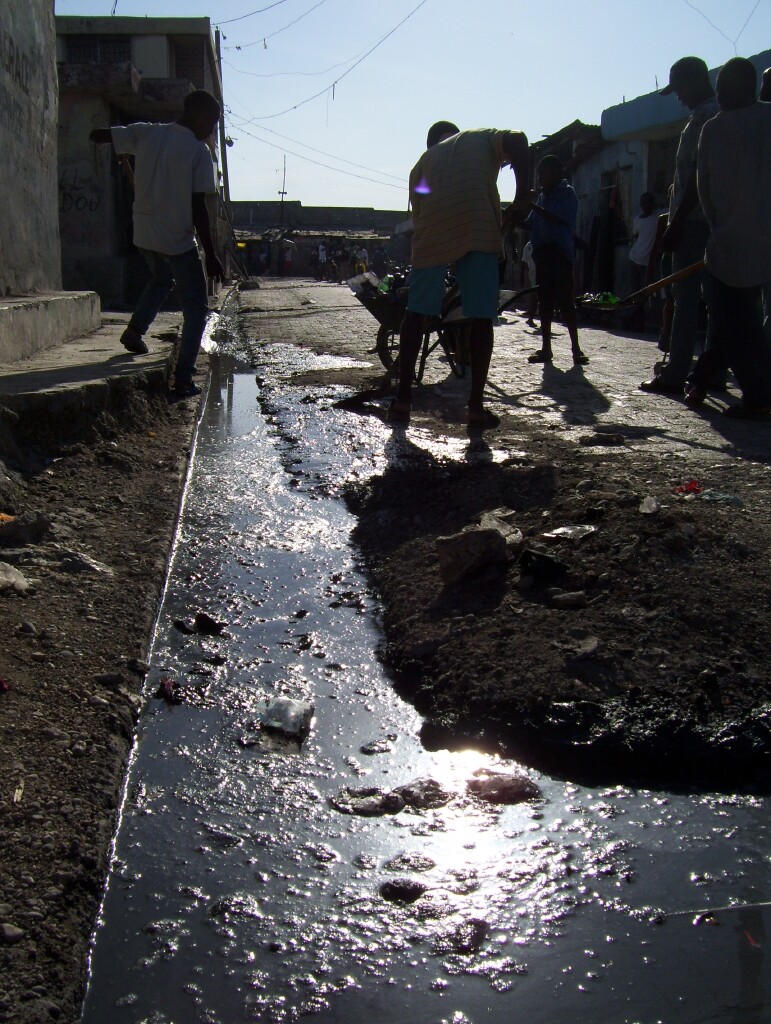 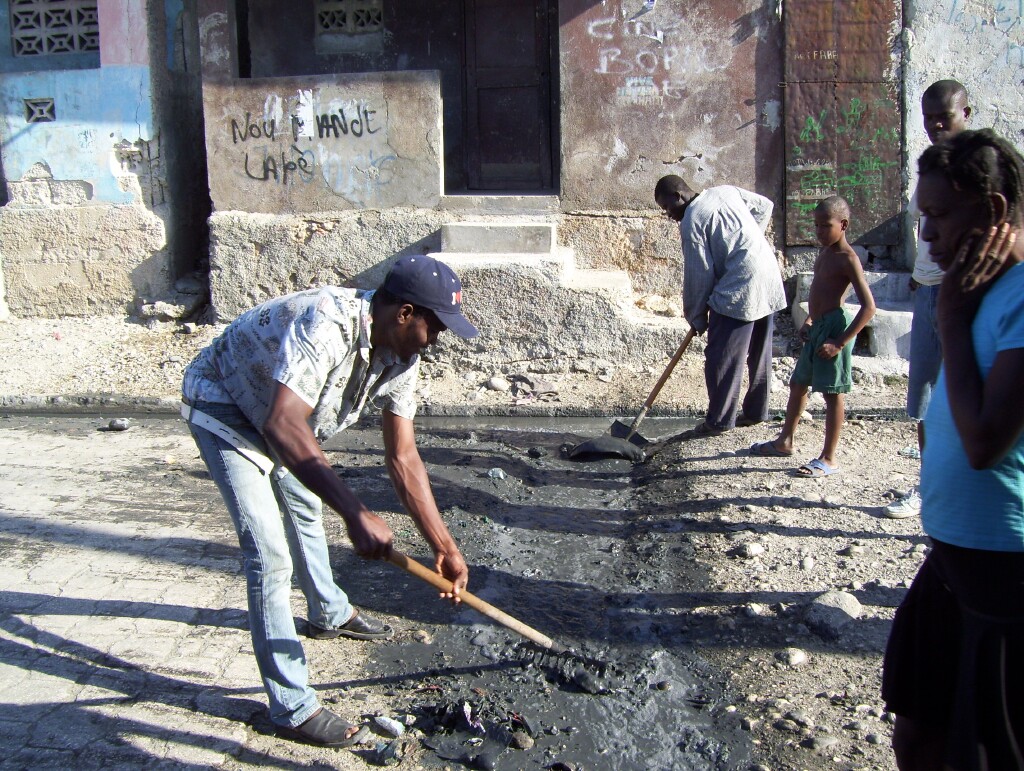 It’s hard to be sure what direction this initiative will take. For one thing, the guys need to stick with it. If they do stick with it, it will be most meaningful if others begin to join them.

But in the meantime, they are making a real difference – if, perhaps, a small one – in the quality of the life that they and their neighbors lead every day. And what’s more, it’s a change rooted in a decision they took together by reflecting as a group on the state of their world.

An education that can lead to such change is, I think, popular in the sense that it is of the people. But by establishing the conditions under which the guys pay ever increasing attention to their world and to the roles they might play in it, such an education is liberal as well. It’s liberal in the sense that it liberates. It frees them from the limitations that inattention to their own possibilities imposes. 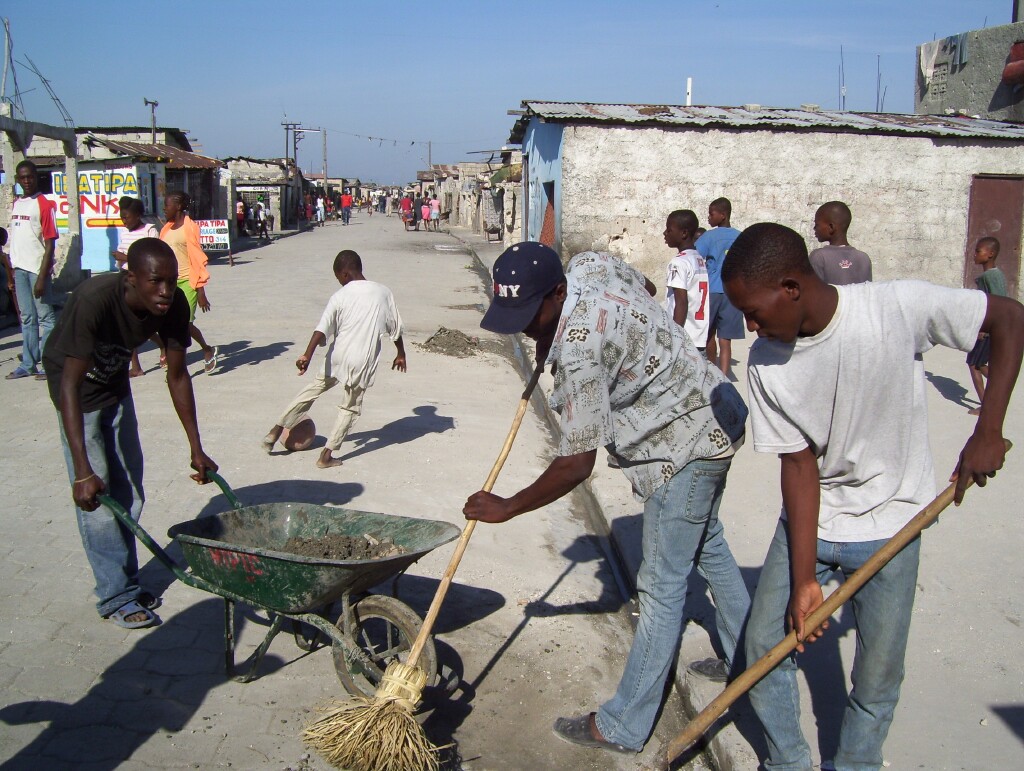