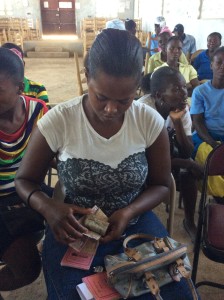 Walking through Derasin, to the home that Rose Marie and her husband Emmanuel shared before they joined the CLM program, you would not have imagined that the couple living there would need the help that CLM offers. The yard surrounding their home was always richly planted, covered with healthy-looking patches of beans and corn. Large, old mango trees provided comfortable shade. You would have assumed that anyone living in such an area would at least have plenty to eat.

But nothing about those fields or trees belonged to Rose Marie or Emmanuel. As Rose Marie struggled with her third pregnancy, the family would get by on whatever Emmanuel could bring in through irregular day labor. They frequently faced days without solid meals, getting by on abandoned mangos or boiled leaves.

Then the family joined CLM, and things began to change. Emmanuel continued to seek day labor, whether in his neighbors’ fields or in the sand pits that line the main highway along the ridge separating Port au Prince from the Central Plateau. Rose Marie stayed home, looking after their two children and taking care of the livestock they received from CLM. She would use their weekly stipend to ensure that her children were eating well, but she’d also use part of it to buy poultry. She began keeping chickens, ducks, and turkeys, and they all prospered.

As her due date approached, however, life became more difficult. She is a tall, strong woman. But she was becoming enormous. Her previous pregnancies had been nothing like this. Her feet and ankles began to swell so much that it became hard to move around at all. And Derasin is far enough off the main road that she would need to walk just to get to where a truck could pick her up to take her to the hospital. Preeclampsia is a serious threat to the women of rural Haiti, and her case manager, Georges Zetrenne, kept a close eye on her situation. CLM’s driver Wilfaut made four trips to the hospital with her before she finally gave birth to twins.

Having the twins to take care of changed her life. She was limited to what she could do around the house. Emmanuel would have to work even harder to bring in whatever income he could. Between the pressure he was under to earn their daily bread, and Rose Marie’s inability to leave the twins, the couple was forced to make a difficult decision. Their two older children had finally started going to school, but neither parent was able to walk them to the one they were attending. They had to keep them at home and hope to start over the following year.

Shortly before Rose Marie graduated, the couple hit a bump in the road. They lost a large pig and a cow to disease in quick succession. They suspected jealous neighbors. They had harvested good crops on farmland they rented, and their livestock was starting to take off. The deaths of such large animals were sudden and mysterious. But rather than cry over their losses, they decided to move out of the house they had built on Rose Marie’s land. So they packed up what they owned and moved to a small place on land that Emmanuel’s family owns in Fond Cheval, near the sand mine that was becoming their most important source of steady income.

The day after graduation, Rose Marie took out her first Fonkoze loan. She had been in a credit program offered by one of Fonkoze’s competitors in the past, before joining CLM, but it hadn’t worked out. She would borrow enough money to buy a pig and some poultry. The pig would mature over the term of the loan, and she’d sell it to repay the loan and its interest. The poultry would remain as her profit. Because she generally had good luck with poultry, and her family was small, it seemed like a good arrangement.

But Teschen Disease is a serious threat to pigs in the Central Plateau, and Rose Marie’s luck ran out. She lost a pig to the disease, and had to sell off other assets just to pay back what she owed.

Facing the chance upon her graduation from CLM to join Fonkoze’s credit program, Rose Marie made a different sort of plan. Fond Cheval is a bigger and livelier place than Derasin, and she and Emmanuel decided to use their move as an opportunity. They began selling cellphone minutes, and the business took off. They decided to use credit to accelerate the sales. The loan is important, because cellphone minute sales can only work if you have enough cash in the business to be able to provide change all the time. Having the correct change ready is one of the most important competitive advantages that a salesperson can offer to clients in the Haitian countryside. Without it, she and Emmanuel would have had to choose between losing customers to other venders or selling on credit. Thanks to their loan, they can now sell as much as 2500 gourds worth in a day. That’s translates into 200 gourds of profit. They had no trouble making the first of their three repayments. And they did not need to shrink their business to do so, even though they have also been using some of their earnings to help feed their kids.

And they are nowhere near ready to stop. They’re already planning what they will do with their next loan. “We want to increase the loan just a little. But we won’t put more money in the business we have,” Rose Marie explained. “We’ll add another, new business.” The twins are still small enough that one or the other of them has to stay at home all the time, so Emmanuel will stay with the twins and sell phone minutes from home on market days, while Rose Marie buys sacks of produce that she can then divide into retail quantities and sell in front of their home.

Rose Marie and Emmanuel have struggled since they joined CLM, but they have made real progress, too. They are ready to send their older children back to school in their new home community, and are committed to helping all their children to a better life.