Rose Marthe lives in Wòch Djep, a small neighborhood hidden along the western tip of the slope that descends down the northern side from Mannwa. When we met her at the end of 2010, she was nine months pregnant and hungry. I sat on the ground in front of her home as we spoke. She sat on a bucket. She had no chairs. My strongest memory of the interview is of her struggling to balance her large, pregnant stomach in front of her as she shifted uncomfortably on the bucket’s open end.

I was there to determine whether she was poor enough to qualify for our program, and it was an easy call. She had nothing: no livestock, no small commerce. She and her partner had access to land that they could have been farming, but they didn’t have the resources they would have needed to farm it. The family lived in a small, one-room shack made of sticks and straw, with a roof of palm that could not protect them from tropical rains. Her children often went hungry. She described to me how she would collect leaves to boil in the evening just so that her children would not need to go to bed with nothing whatsoever in their stomachs. Often, she couldn’t afford even the salt to boil the leaves with. And they were often sick, so that she’d have to take one or the other across Mannwa to the closest clinic, to get them medical care.

She joined the CLM program at the beginning of 2011. She had been able to attend neither the initial six-day training that the program offers all new members nor the launching ceremony. She had just given birth, and couldn’t move around much. She certainly couldn’t make the long hikes between Wòch Djep and Kafou Jòj, where the training and the ceremony would be held. Her husband went in her place to both.

But as she recovered from childbirth, she began to work hard to change her life. She used most of her food stipend to feed her children, but she always saved some of it to invest in farming. Between her new-found ability to feed the kids and the access to safe water that her CLM water filter helped her ensure, Rose Marthe was able to improve her children’s health, which freed her in turn to work harder to improve their livelihood.

Her husband Sepavre was willing to work for her and their children, but he hadn’t previously had resources to work with. He helped her repair their home and install their latrine. They had no pack animal, so carrying the cement and other construction materials up the Mannwa ridge and then back down again would have been difficult – maybe impossible – without him.

And they took excellent care of their livestock. Though they were unable to succeed with raising pigs, their goats flourished. The steep slopes that crisscross through the valley north of Mannwa have ample pasturage. As long as you can keep your goats out of your neighbors’ fields, they are likely to do well.

By the time she graduated from the CLM program in the summer of 2012, her life was entirely different than it had been. She raised goats and turkeys. She even owned a small cow. Her children were healthy. She fed them two-three meals every day, and she was able to begin sending them to school.

I went to Mannwa to see Rose Marthe this week, almost five years since her graduation. The path to her home is a long, straight, angular descent that runs slowly down the northern slope of Mannwa towards the westernmost edge of the ridge, and I was most of the way down when I ran into another former CLM member who was weeding around a neighbor’s bean field. We sat down to chat, and as we did, we saw a figure approaching quickly in the distance. Rose Marthe had seen my white face from the bean field she was working in with Sepavre, and had figured it could only be me, so she started running to meet me across the steep, pathless gardens that lined most of the slope. She joined Chrismène and me where we had been chatting, and the three of us walked the rest of the way down the path to Rose Marthe’s home.

Rose Marthe has experienced some ups and downs since graduating from CLM, especially in the last two years. She and Sepavre still depend primarily on their farming, and recent crops have been poor. Most critical has been the failure of their millet. Millet is the staple for farmers across the mountains of the Central Plateau, and in other areas of Haiti as well, and all across the region the last two harvests were destroyed by a parasitic infestation. The plants grow tall and healthy-looking, but as the crown of grain emerges from the top, it turns black, covered with a tar-like film. The plants produce nothing safe to eat. Even the stalk, which would normally be useful as livestock fodder, is unsafe. In addition, their main cash crop, beans, were hurt, though not destroyed, by Hurricane Matthew.

So, once again she’s struggling to feed her children. She has to buy most of the food they eat, mainly kabesik, a low-grade Dominican rice she can get at the market down in Chanbo. She has had to sell off some goats, and she and Sepavre have returned to charcoal production as a source of cash. Even so, there are days when she sends them into the local mango trees for their meal. Fortunately, the mango crop is strong this year and it’s coming in at a good time.

But when you ask her how the troubles she’s facing right now compare with the problems she faced before she joined CLM, she just laughs. “We never had hope. Now we have hope.”

And she explains. “I have my cow, and it will have its first calf in the fall.” That’s been a long road for her. Her first cow was a small bull, which she eventually was able to trade for a heifer. She kept that first heifer, and watched it grow, but it never produced a calf. She sold it and bought another, but the second didn’t reproduce either. She now is on her third. She also still keeps goats. Her biggest goat is one of the females she received from CLM in 2011. “It’s pregnant with its thirteenth litter.” Once it has weened its young, she’ll sell it to a butcher. It’s large enough to bring in enough to buy two young females. She’ll add them to the two young females she already has and to whatever the large female’s current litter is. 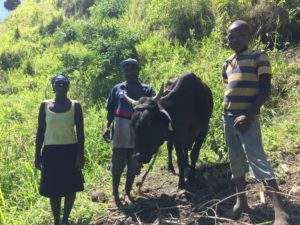 Though hunger and unexpected funeral expenses have forced some sell-offs, and though she had to use a goat to invest in her farming this year as well, she reduces her expenses to a minimum rather than letting herself slip back to zero. “The children have to eat every day, but if we adults need to miss a day now and again that is better than selling everything we have.”

Most importantly, her beans look really good this year. They should be ready to harvest in July. She thinks of herself as traversing a difficult moment, not as living a difficult life. She’s unhappy that the children lost a year of school when the school they had been attending closed suddenly, but she is committed to sending them to another one in September.

Her life will probably remain a struggle. She finds it difficult to progress as well as she feels she could, and she says that the main barrier is her husband.

It is not as though he is nothing but a problem. She has been counting on Sepavre since before she joined the CLM program. When she first met him, she had just lost her oldest child and was ready to give birth to another, whose father had abandoned her. Sepavre paid for her child’s funeral, and then helped her raise her own child. They then had children together and established their household in Wòch Djep, near where he had access to land they could farm. He’s stuck by her in sickness and in health, and was especially important when she contracted cholera.

She has, however, never been his only wife. He already had another, wealthier partner even when they first met. Though he works hard for Rose Marthe and their children, she feels he works even harder for his other household.

In some ways, she could understand that in the beginning. His other partner had resources to invest in farming, and she did not. Working in the other woman’s fields was a better investment of his time.

But that hasn’t been so for a long time, and not only is she unhappy that Sepavre doesn’t value her as she thinks he should, she accuses him of using her resources to support his other wife and her family. She even says he sold a mule she had purchased when he needed money to invest in the other woman’s fields. And a mule is a both big investment, worth as much as four or five goats, and a big difference-maker, because it enables someone to bring much more merchandise to market than she can carry by herself.

That brings me back to Chrismène. When the CLM team met her in 2010, she was also together with a man who had another partner. She had grown up as an unpaid servant in the man’s parents’ home. By the time she was thirteen, she was pregnant, and though she lost her first child, she had another when she was 14. By 2010, she was in her early twenties and the couple had four children. Elga also had five with Omène, his principal partner.

Chrismène flourished financially more than any other of the program members with had in the Mannwa area. She took good care of her livestock, and they multiplied. By the time she graduated, she had not only a cow but also a horse, in addition to a handful of goats. Her farming went well, and she used it not only to help her as she bought larger livestock, but to establish a business buying and selling beans. She’d walk her horse to the hard-to-access market in Regalis, and bring loads of beans down to the Chanbo, where they would reliably sell for more.

Like Rose Marthe, she depended on her partner. Elga lugged the materials for her home and latrine construction to the yard on his land where she lived, which was even farther from our delivery point than Rose Marthe’s. He helped her take care of her livestock, worked in her fields, and helped send their children to school.

But five years after graduation, Chrismène had reached her late twenties, and she had had enough. When I saw her in Mannwa recently, the first thing she told me was that she had left Elga. It cannot have been an easy decision. She had been with him since she was a little girl. But she took her two younger children and left the two older ones with him. She gave him a cow and three goats to help him take care of the children. He and Omène now have seven without Chrismène’ two. She kept three goats and a mule, and moved with her two younger children into another man’s house. She says that he’s good with her kids, and they now have a baby together. Like Rose Marthe, she’s struggling for the moment because of the loss of the millet harvests, but, also like Rose Marthe, she too has her hope and a clear plan. 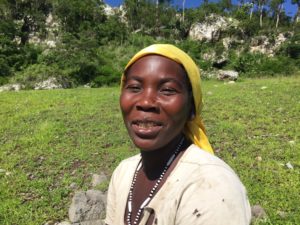 1 thought on “Rose Marthe and Chrismène, Five Years After Graduation”