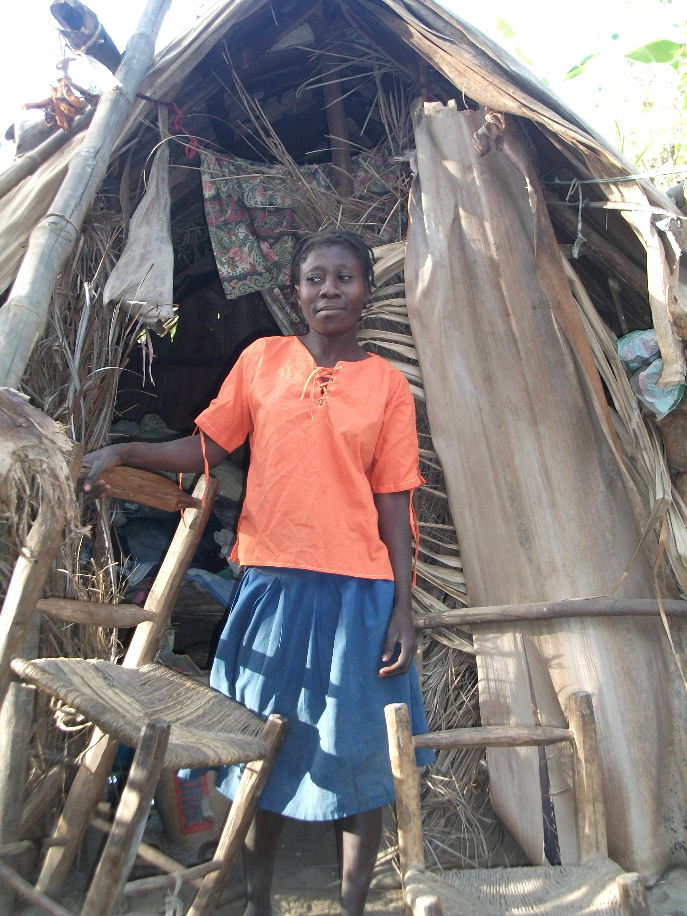 Perrona in front of the shack they’re in until their house is ready.

Perrona lives with her husband Soiye and their two small boys in Nan Joumou, a sparsely populated area behind the Mannwa ridge that overlooks Boukankare from the north. The hills that cut through Nan Joumou and areas around it — the whole valley between Mannwa and Bay Tourib, in Tomonn — aren’t high, but they are steep, and the valleys between them are narrow. The area is thus pretty remote.

She was selected to be part of the large group of women who joined the program at the end of 2010, and she was in the program briefly. But she could never make a firm decision to stick to it. One week she would tell her case manager, Martinière, that she wanted to be a member. The next week, she would tell him that she had decided not to after all. I eventually went to speak to her and her husband, looking for a final decision, but I found only her, and she said that they had decided to “take a little break” from the program. When I told her that we couldn’t offer her “a little break,” she let me know that she had decided simply to leave it. She returned her membership card and her “pink notebook,” the register that Martinière used as a weekly record of his work with her.

Within a couple of months, however, Soiye sought me out as I was hiking around Mannwa. He let us know that they had decided to join the program after all. His older sister and Perrona’s mother were both starting to flourish as members, and he and his wife were ready to take their chances, too.

I had to tell him that I was sorry, but that we had completed selection in the area, that we had offered them as many chances as we could, but that Martinière’s members in Mannwa were already well into the program, and we couldn’t offer them a chance to join at that time.

What’s worse: CLM selection works neighborhood by neighborhood. We go through each area only once. That’s why we work so hard to avoid missing anyone. Generally, if we miss them once we probably have missed them forever. Normally, Perona and Soiye would have lost their one chance, and lost it permanently.

But they got lucky. Nan Joumou is on the very northern edge of the region we had covered in late 2010, and by the next summer, we were selecting new members in a neighborhood just a little farther north. Nan Joumou had never really fit conveniently into Martinière’s territory in Mannwa. It had been a difficult hike for him to get down to Perrona’s house and back up to Mannwa each week at the end of his long trek from Zaboka across Mannwa, through Gapi, to Viyèt. It wouldn’t be any easier for the new case manager, Titon. He would have to hike southwest, across a couple of ridges and valleys, from Gwo Monte, in the alley between Mannwa and Balandri. The house is almost 45 minutes from the nearest members Titon serves. But I hiked to Nan Joumou myself to invite Perrona to rejoin the program, and she and Soiye didn’t hide their excitement. They’ve now been in the program for just over six months. They’re facing challenges, but making good progress as well.

The two enterprises that Perrona chose to start were goat rearing and pig rearing. Each has had its problems. They received two good-looking female goats, but one died of anthrax shortly after they got it. Thanks to their prompt attention, they were able to prevent the disease from spreading to the surviving goat. But it wouldn’t get pregnant. Eventually, Soiye had to sell it, and buy another. This new goat is now almost ready to give birth for the first time. We haven’t yet gotten them their pig at all. The epidemic of Teschen disease tearing through Central Haiti is discouraging. Pigs are dying in such numbers that we’re hesitant to take the risk.

But these problems, which could be blocking their progress, have failed to really set them back because it has turned out that they have a real talent for poultry rearing. They did not choose to receive poultry from CLM, but have used all the possibilities that the program has offered them to buy birds on their own: chickens, ducks, and turkeys. They saved part of their weekly food stipend during the six months we offered it, and used it to buy birds. They used the transportation stipend that Perrona has received at each of our training sessions, and used it to buy birds. They even bought some birds that had nothing directly to do with CLM. Soiye explained: “The program didn’t give us everything that’s here. But everything you see is ours. The program just asks us to do our part.”

Now that they’re comfortable with their place in CLM, they’re also candid about both the things that convinced them to leave the program and the one factor that convinced them to come back. “People who weren’t chosen for the program don’t want you to make any progress,” Perrona said. “They told me that I could die. They told me that I’d have to dance without panties. They said all kinds of things.”

Soiye then added, “But when we saw that people were dying of cholera left and right, we realized that we could die too. We decided that if we died in the program, at least we’d leave something behind.”

So now they’re definitively part of CLM, and they’re planning how they can continue to progress. They are still nervous about taking the pig. It seems so risky. But they and their case manager have another idea. The population near them in Nan Joumou is too small for Perrona to make much money by setting up a small commerce there, and each of the local markets is a long, hard hike away. For her to really start anything worthwhile, she’ll need a horse. If she had one, she could buy merchandise in the mountains and bring it down to the town, and then buy other stuff again in town and bring it back up the hill. She’d have a reasonable chance of earning enough to help her and Soiye really get ahead, especially since he’s demonstrated that he’s willing to work hard to pull his weight as well.

A horse will cost much more than the small pig we would buy for her, but if we take the money we would use for the pig and add to it the savings she’s accumulated in the first seven months of the program, she might have just enough to buy a small horse and a first load of merchandise. It seems worth trying. 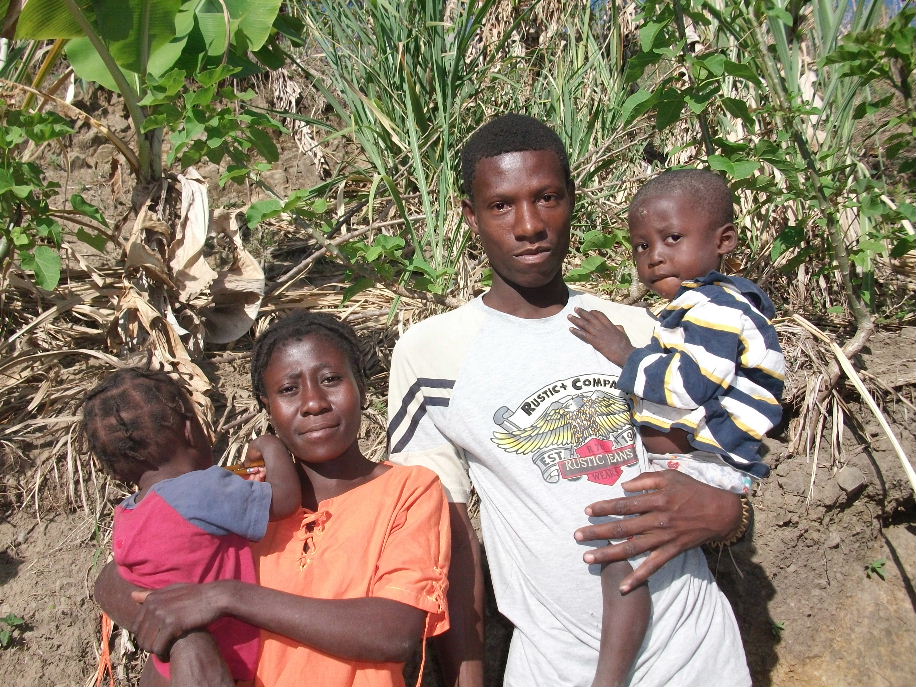 With Soiye and their boys.