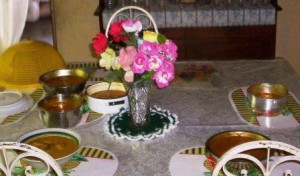 The photo above was taken in Madanm Anténor’s dining room on January 1st, 2006. It’s room a know well because it’s what I called home in Haiti from 1998 to February 2005, when I moved into the house that Byton built. January 1st is Haitian Independence Day, the anniversary of the 1804 declaration of independence from France and Haitians everywhere celebrate it by feasting on soup joumou.

Soup joumou is pumpkin soup, and the story goes that when the French still controlled Haiti it was consumed only by slaveholders, never by slaves, so that when independence was declared former slaves decided to celebrate by consuming what had, until then, been forbidden goods. It came to be known as independence soup. When Jean-Bertrand Aristide was elected in 1991 after years of dictatorship and oppression, he called it democracy soup.

So it is a meal that means a lot to Haitians. And it also tastes great. I’ve grown fond of all sorts of Haitian foods, but love none as a love pumpkin soup.

The photo was taken midmorning, about 10:00, and so lots of soup had been consumed by the time it was taken. Andrelita and Myrtane, Byton’s sisters, had borrowed and alarm clock from Byton the night before so they could get up at 3:00 and start cooking. Their soup arrived in my house as I was finishing my coffee around 6:00.

So the fact that so much soup had already been consumed and the quantity still sitting on Madanm Anténor’s table requires some explanation. In fact, only one of the bowls on the table has any remnant of the soup Madanm Anténor herself had made that morning. Each of the other bowls contains a generous portion of soup, prepared in one of her neighbors’ kitchens: Madanm Clébert, Madanm Willy, Andrelita and Myrtane, Madanm Frénel, and Merline, Madanm Jean-Claude’s youngest daughter.

Because that’s what happens all through the morning of January 1st. Children weave through the neighborhood, carrying bowls of soup from one home to another, sent with good wishes for the year to come. Adults circulate around the neighborhood as well, wishing one another a good year and good health and that they will always continue to live together as neighbors just as they do now.

It’s a practice the merits careful attention and, perhaps, imitation: a whole neighborhood of friends and relatives that eat together once a year, celebrating their friendship, their sense of community, with the meal most meaningful to them all.

And, as I said, the soup is great. I’m not the only one that thinks so. Madanm Anténor can’t get enough of it. The photo below is of Valouloun her youngest daughter, who loves it perhaps even more than Madanm Anténor and I combined.