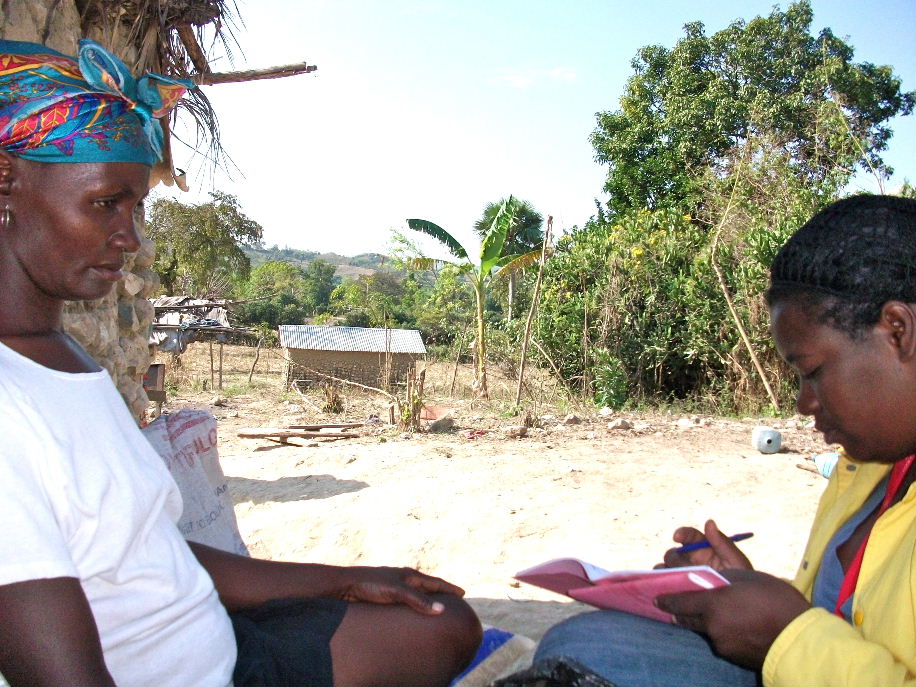 Madolie and her case manager, Sandra

The pillar that our program stands on is the close accompaniment we offer our members. In practice, that refers first and foremost to the visits our case managers make to our members’ homes every week. These visits help us maintain close contact with members. They enable us to keep track of their progress, and thus give us a way to ensure we know when and how to support our members in their struggle.

And there’s nothing casual or informal about the visits. They follow a procedure that has remained more or less fixed since the program was in its pilot phase. There’s even a laminated checklist our case managers are supposed to bring into the field with them outlining the rigid ten-step process.

One of the most important of these steps is the discussion of the weekly issue. In the course of adapting the program to Haiti, Fonkoze identified ten lessons that we believe are most critical to our members to learn as they attempt to change their lives. These lessons all involve changing behaviors with respect to certain key aspects of their lives: Nutrition, management of drinking water, hygiene, pre- and post-natal healthcare are examples of areas we discuss. Each week the case managers discuss one of them. At the end of ten weeks, they return to the first issue and repeat the series.

At the same time, we need to talk to them frankly about the consequences of having a lot of kids. Though we have members with only one or two, the number who have six or seven or eight is striking, and the extra difficulties that very large families will have as they try to move forward are not hard to figure. Each kid is a treasure, but also a regular expense and an added risk of catastrophic, livelihood-destroying major expenses as well.

Sandra, one of our new case managers, and I met Olienne, a new CLM member, while she was bringing her infant to downtown Boukankare to have it weighed. This is part of a regular postnatal health program provided by Partners in Health, the local healthcare provider and the most important provider of health services across the Central Plateau.

The baby is Olienne’s fourth child, and the only one that is with her. She gave away the other three – who have various fathers – because she was too poor to keep them even minimally fed. This fourth child, a boy, was not fathered by the man she now lives with, but that man has said that, as long as the boy is raised to call him “dad,” he will take responsibility for him.

So Olienne presents a case in which a real understanding of family planning seems urgent. At the same time, Sandra’s conversation with her about it was extremely difficult, in two ways.

First of all, Olienne has a hard time at this point really focusing on anything that Sandra tells her. Each week, before they talk about a new issue, case managers review the issue they had discussed the previous week. Olienne claimed to remember nothing at all of the issue Sandra had last discussed – basic nutrition – and had a hard time even repeating or summarizing parts of this week’s issue as Sandra went over them with her. Sandra would repeatedly ask, “Do you understand what I’m saying?” And though Olienne would claim that she did, she would not be willing or able to say what she had understood.

Second, Olienne does not see herself as a decision maker with respect to her own reproductive life. She says that her current partner will not agree to contraception because he wants a daughter. He himself has denied this in separate conversations with Sandra.

But what is most interesting about this is the way Olienne frames the issue: “Lè w kay moun nan, se pa w k ap deside.” That means, “When you live in someone else’s home, you’re not the one who’s going to decide.”

But the translation doesn’t really communicate the force of the phrase. To live “kay moun” or “in a person’s home,” generally means something specific. It’s the phrase used to describe restaveks, the children in Haiti who live in domestic servitude. If Olienne sees herself as living kay moun, she does not see herself as an adult but as a child, without rights of her own.

So Sandra will have to figure out a way to communicate effectively with Olienne, and to help her see herself as an adult with responsibilities and rights. Only when she is successful in these basic aspects of her work will she have any chance of communicating effectively about a more specific question like family planning. But the whole conversation seems not only important, but urgent. Maybe even too late. Because though Olienne’s boy is only six months old, she shows signs that she is pregnant again.

After talking to Olienne, we went to see Madolie. She is a woman about 40 years old. If you ask her how many children she has, she’ll immediately switch to the past tense. She’ll say, “I had ten, but I lost four of them.” Her six surviving children, ranging from girls in their late teens to a boy about six, live with her and her husband in Pyèlwiblan.

Madolie seems firm when she says that she’ll have no more kids, and cites the youngest boy’s age as evidence that she’s no longer in any danger. But though she feels no need to learn about family planning for herself, she was extremely interested for her two older girls. Neither is the child of her current husband, but she says he treats both of them well, as though they were his own. Madolie’s oldest had a baby in July, and her second – who’s just 16 – had hers in January. Neither father is providing the least support for mother or child. The younger girl has been unable or unwilling even to identify the father. If you ask her, she just looks at the ground and shakes her head.

Both babies have thus become additional mouths for Madolie and her husband to feed. So when Sandra starts to talk about contraception, Madolie is glad to have her call the girls over to join the discussion.

We can’t and shouldn’t decide how many children our members should have, or whether they use birth control, or what kind of birth control the ones who choose to use it should use. But the link between their poverty and their many children and the barrier additional children will present to their progress mean that we must at least do what we can to ensure that they feel entitled to make decisions and that the decisions they make are well-informed. 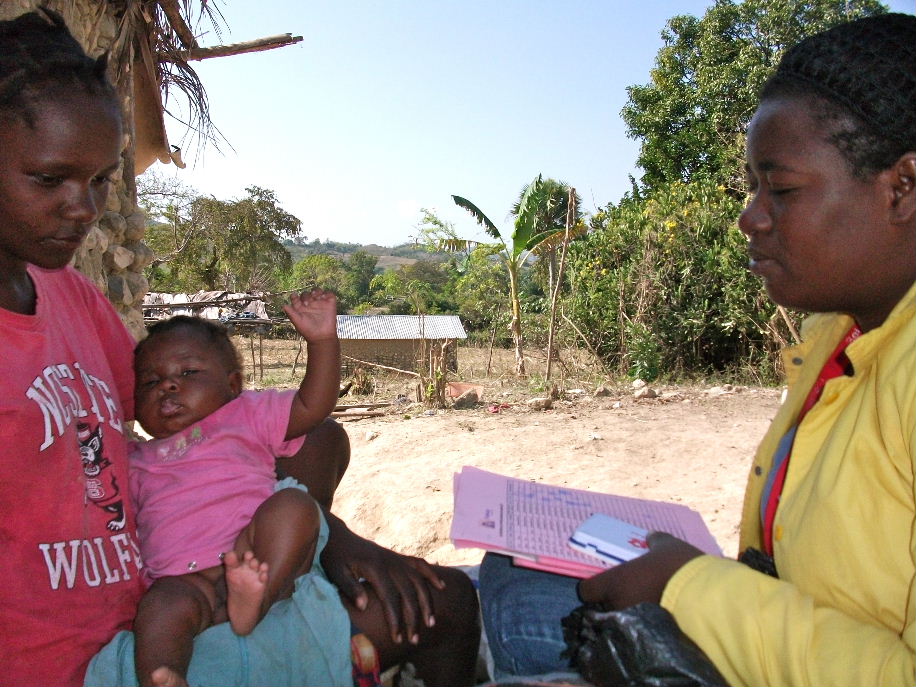 Sandra talked with Madolie’s daughter, too. Here she listens, holding her young son.